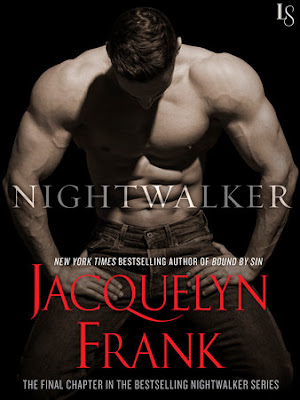 From New York Times bestselling author Jacquelyn Frank comes the final chapter in the Nightwalkers saga! As the momentous showdown with a powerful demon unfolds, a passionate encounter breaks the ultimate taboo.

Kamen is a Bodywalker, an ancient soul reborn in one human host after another. He’s also a prisoner of his own kind: for it was Kamen who released Apep, the deadly god who threatens the existence of their world. To atone for this grievous error, Kamen accepts an urgent mission: to convince the other nations of the Nightwalkers to set aside their centuries-old conflicts and band together. If he fails, all will be lost. And no tribe presents a greater challenge than the Wraiths, the spectral beings who are feared and despised for their lethal deathtouch.

Kamen makes first contact with a stunning, ghostly pale beauty named Geneviève. Part Wraith and part human, scorned as a half-breed, Viève shares the hunger for redemption—and for connection. Her scintillating touch holds the kiss of death, and yet it makes Kamen feel more alive than ever. Soon his lips are pressed against hers, sending Viève into fits of desire and forging a bond that breaches the divide between them. Now they must unite all the Nightwalkers, from Vampire and Shadowdweller to Djynns, and fast—for Apep is ready for war.

Kamen walked to the bathroom and splashed some cold water on his face. Then he turned on the lights and picked up one of the ancient tomes he had been studying in hopes of finding a solution to any of his many daunting problems. And, failing that, he was searching for spells, both offensive and defensive—anything that would help protect the Nightwalkers when Apep’s next attack took place.

He had been reading for several hours when, suddenly, something on a papyrus scroll jumped out at him—hieroglyphs of the figure of a god using some kind of power to divide a group of twelve beings into two halves.

Kamen knew instantly that the god was Apep and that he had used his power to sunder the Nightwalker nation into two. Then it showed that the god had died as a result of the curse. This was new information. He felt an emotion akin to excitement—if a man as jaded as he was could even feel excitement and hope any longer. If the god could die from the curse, then that meant he could die, period. That his mortal body was fragile enough to be destroyed. The question was, how did they go about destroying that mortal body when they hadn’t even gotten close to doing so in spite of using strength and manmade weapons against him? He’d been shot directly in the heart and it hadn’t even made him blink. If that couldn’t kill him, then what could?

But the next hieroglyphs were even more important. They showed the god resurrecting, enslaving people, using his power to kill . . . and then they showed the twelve beings coming together to fight the god. Eventually destroying him.

Did that mean what he thought it meant? That if all twelve nations of Nightwalkers got together they could fight this god? If that were the case then it would be an impossible task. Not only because they couldn’t see one another, but because the twelfth nation, the Wraiths, were enemies to all the other Nightwalkers. True, there had been an unspoken truce of sorts these past decades, more a case of neither making any moves against the other. But every Nightwalker on this side of the faction, known now as the Second Faction, knew the Wraiths were cold-blooded and would just as soon touch you with their instantly fatal deathtouch as not. The First Faction was lucky they knew nothing of the Wraiths. They made Nightwalker blood run cold.

But what if the Wraiths could be made to come to the table? Could be made to understand that it was best for all of them if they worked cooperatively against the god Apep? Surely they had just as much to lose.

But the glyphs showed no explanation as to how the twelve were able to coordinate an attack against the god. Hieroglyphs were notoriously open to interpretation and could only get across the most rudimentary of ideas. It wasn’t as though you could glean great philosophical discussions from them.

He gingerly touched the aged papyrus. Simple they may be, those few succinct images were the closest they had gotten to some kind of history or explanation or suggestion as to how to end all of this. He put a marker in the page and continued on in search of more, but he went through all the other scrolls and found no hint of further explanation.

It was worth considering at least. And it wasn’t his place to agree or disagree with the concept. His only role was to report what he learned.

And so when dusk fell, that was what he would do.

Jacquelyn Frank is the New York Times bestselling author of the Immortal Brothers series (Cursed by Fire, Cursed by Ice, Bound by Sin, and Bound in Darkness), the World of Nightwalkers series (Forbidden, Forever, Forsaken, Forged, and Nightwalker), the Three Worlds series (Seduce Me in Dreams and Seduce Me in Flames), the Nightwalkers series (Adam, Jacob, Gideon, Elijah, Damien, and Noah), the Shadowdwellers novels (Ecstasy, Rapture, and Pleasure), and the Gatherers novels (Hunting Julian and Stealing Katherine). She lives in North Carolina and has been writing romantic fiction ever since she picked up her first teen romance at age thirteen.