A visit with Sierra Cartwright, author of Brand 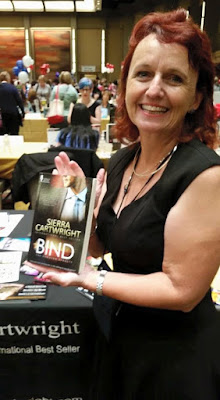 I am so excited to welcome back Sierra Cartwright! Celebrating the release of her new book, Sierra is here to give us a little bit of insight into a scene from Brand.

Take it away, Sierra!

Hi, Crystal Blogs Books! I appreciate you so, so much. Thanks for having me back. It’s always such a pleasure.

If You Dare…
By Sierra Cartwright

A wicked little part of me really enjoys putting characters into situations where they’ve never been before, taking them beyond their comfort zones, forcing them to grow and change as a result.

I really loved writing Bind, my most recent book from Totally Bound. Not only is Cade Donovan a cowboy, but he has a spectacular, inherited ranch in South Texas. The fact it’s isolated on endless acres of land gave me a broad canvas on which to create.

When I was doing research for the story, I visited an elaborate ranch house that has a turret, and I decided that the Donovan ranch should have one, too. Initially, I thought it was just an interesting architectural feature, but as the story unfolded, so, too, did an idea.

The turret is attached to the home’s master bedroom. And since it has only a small living space, it made sense that it would serve as an intimate place to hang out. I imagined that women through the years had watched to see if their men were returning home, and then a naughty idea unfurled.

The heroine might not be a hundred percent certain that it’s the hero returning for the evening. She might worry about being naked. She might be apprehensive about his reaction.

Since the images persisted, I decided to put my heroine, Sofia McBride, into the situation. Writing the scene was a ton of fun. Sofia isn’t particularly experienced with men in general, and she is new to the relationship with Cade. In order to fulfil his fantasy, she has to put aside her doubts and fears while digging deep inside for confidence and courage.

I loved Cade’s oh-so appreciative response to her attempt to please him, and I admired Sofia for doing something so uncomfortable that it was out of character for her. I really believe that when we’re the most vulnerable to another person, we can grow in our relationships, developing trust and laying a foundation to build on.

Here’s to you taking a walk on the wild side…

Once she was in the turret, she couldn’t help but look outside for Cade. She saw nothing. Again, she wondered how he managed the sense of isolation.

Her heart did a slow, thudding beat.

She told herself that there would be no way he could see her. There was no reason for him to look that direction, and the occasional rain would obscure the view.

There were a dozen reasons she couldn’t, shouldn’t take off her clothes and expose herself in the window. Among them was the fact that she didn’t do things like that. Sofia McBride, staid, boring business owner, didn’t set out to seduce men.

As he approached, she amended her thought.

Until now, she hadn’t behaved that way.

With Cade, she was letting her emotions and instincts guide her more than she ever had. Not questioning what the hell had come over her since she’d driven onto the Running Wind, she toed off her boots even as she pulled the overhead chain to turn on the light.

It might have been her imagination, but the ATV seemed to slow.

Succumbing to the feeling of urgency, she finished undressing then she moved to the window.

Gulping back trepidation and nerves, she spread her arms wide, as if she were fastened to restraints as he’d said earlier.

Cade—please God let it be Cade—unzipped the side and exited the cart.

He tipped back his hat and looked up.

She told herself she couldn’t see his eye color from here, but she fancied that she did—dark, steely, intent.

He gave her a thumbs up then returned to the cart.

Now that she’d done that, she wasn’t sure of her next step.

Stay there until he returned? Get dressed? Pretend it hadn’t happened?

The back door slammed.

She glanced at her pile of clothes and frowned with indecision. Since she rarely went naked, she felt odd. Even at home, after a shower or bath, she pulled on a robe, and she kept it on until she dressed.

From what he’d said, though, he’d probably prefer she always be nude.

She heard sounds from downstairs, the rumble of his baritone as he spoke to the dog. Then there was silence, followed sometime later by the echo of his footsteps on the stairs then in the hallway.

As he drew closer, she settled for merely donning her shirt and leaving it unbuttoned.

His stride on the metal stairs sounded purposeful, and nerves almost compelled her to cover herself or sit. Instead, she chose to remain standing.

When he entered the turret, boots and jeans still damp, she was glad she had. He had eyes only for her and his intent was purposeful

Cade sank his fingers into her shoulders and drew her up onto her toes. “You are so fucking sexy,” he told her before capturing her mouth in a kiss that left her ragged.

It was as demanding as it was powerful, his tongue hot and plundering. He tasted of dominance and untamed desperation.

Everything this man did with her—to her—was over the top, from his desire to have her naked to the way he so physically handled her.

He moved one of his hands to her hair and held her fast so he could deepen the kiss. Her back was slightly bent. The combination of being helpless and protected seeped into every part of her body.

She now had a sense of why no other relationship had worked out for her.

Even though she loved family and being around people, no one had insisted on this kind of response from her.

With a ribbon of panic, she realized she could never go back to a regular relationship after this. 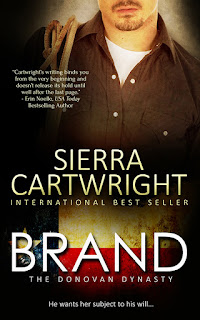 He wants her subject to his will. She’s scared she may never want to get away.

The first time Sofia McBride meets the strong and determined Cade Donovan, he warns her to keep her distance. She tells herself to heed his words, but she’s stunned to realize her depth of attraction to this intimidating man.

All his life, enigmatic rancher Cade Donovan has chosen women who don’t expect too much from him. But when a storm strands him with Sofia, his lovely, won’t-take-no-for-an-answer event planner, all his dominant and protective instincts flare.

Cade wants everything she has to offer, but he soon discovers Sofia’s beauty hides a determination he hasn’t counted on. Her untamed responses send him on a journey that will banish his demons and change them both forever.

Enter Totally Bound’s September blog tour competition for the chance to win an eBook of your choice, not including boxsets or anthologies. 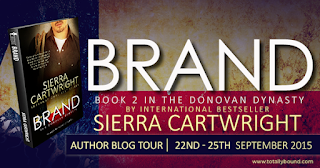