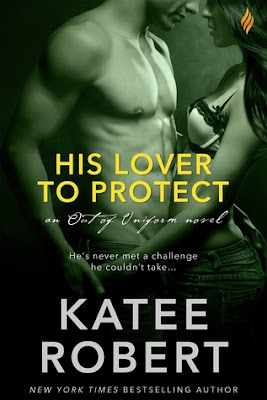 "All I'm hearing is a lot of talk. Put your money where your mouth is." - Alexis Yeung

Alexis Yeung did everything right....only to watch everything go horribly, horribly wrong. Broken and angry, Alexis high-tails it to Europe, determined to face the world on her own terms and without consequence. Which includes a mind-blowing night with a sexy, scarred stranger.

Except, embittered former pararescuer Luke Jackson isn't exactly a stranger. He's supposed to keep an eye on Alexis without her knowing. Ending up in bed together was definitely not the plan. Now he's chasing her (admittedly hot) ass across Europe, a game of cat and mouse that always ends with the two of them tangled up in the sheets.

Something in their scarred, damaged souls calls to each other. And God help them, the sex is unbelievably hot. But if Alexis discovers who Luke really is, he'll lose the one thing that makes him feel whole...

Confession time... I am really starting to fall in love with books that have heroes being sent in to protect the heroine. Bonus points if the hero was sent by a family member or a concerned friend. That is what drew me to His Lover to Protect. Luke Jackson swooping in to keep an eye on Alexis as a favor for his fellow para-rescuer. Seriously, how hot is that? I think we need more para-rescuer heroes. Anyway, back to Luke. Of course, Luke almost immediately drawn to Alexis and is forced to make a move when she literally attacks him. Both Luke and Alexis were amazing. Luke helped her grow and overcome her insecurities. She's always been treated as a second class citizen in her family. Throughout the book, Luke proves to her that she's worthy of being loved and that no one has the right to hold her down. As for Luke, he's left with a scar that has made him build up a wall and close himself off. Alexis showed him that he's more than a scar and she sees him for what he is. I loved watching them together, from their sexy times to their sweet moments on a cliff. Although they move fast in the book, they still take the time to look deeper into each other. Watching them stand up to each other, bantering back and forth, was a lot of fun. I love characters that can push each other's buttons.

His Lover to Protect was such a fun and sexy book. It grabbed my attention from the moment I first saw it to the moment I finished it... Late... Again... Another new to me author and you know what that means... More books on my list. Yay!

Katee Robert learned to tell stories at her grandpa’s knee. Her favorites then were the rather epic adventures of The Three Bears, but at age twelve she discovered romance novels and never looked back.

Though she dabbled in writing, life got in the way—as it often does—and she spent a few years traveling, living in both Philadelphia and Germany. In between traveling and raising her two wee ones, she had the crazy idea that she’d like to write a book and try to get published.

Her first novel was an epic fantasy that, God willing, will never see the light of day. From there, she dabbled in YA and horror, before finally finding speculative romance. Because, really, who wouldn’t want to write entire books about the smoking-hot relationships between two people?

She now spends her time—when not lost in Far Reach worlds—playing imaginary games with her wee ones, writing, ogling men, and planning for the inevitable zombie apocalypse.

Check out the books from the Out of Uniform series!