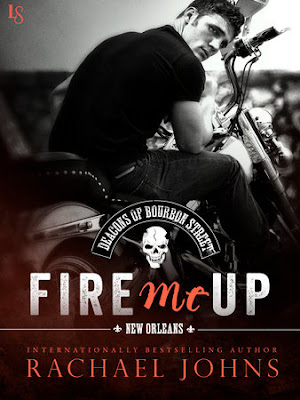 Fire Me Up
The Deacons of Bourbon Street # 2
Rachael Johns
September 1, 2015
Loveswept

Can a scorching affair with a bohemian beauty tame a motorcycle man with a dark side? Rachael Johns takes the wheel in the sexy series co-written with Megan Crane, Jackie Ashenden, and Maisey Yates.

Travis “Cash” Sinclair values only two things from his days with the Deacons of Bourbon Street: his prized Harley Davidson and the man who gave it to him. But now Priest Lombard is gone, and Cash has inherited the Deacons’ clubhouse—not to mentions its unexpected tenant. She’s exactly the type of woman he tries to avoid: all incense and art, with a sharp tongue that promises trouble. So why does Cash want to push aside those flowing skirts and lose himself between her legs?

Billie Taylor fled a bad marriage to start a new life among the grit and glamour of the French Quarter. She refuses to let another man distract her from her dreams, especially an outlaw biker with nothing to offer except hot sex and an eviction notice. Cash is dangerous, with an untamed streak he tries desperately to conceal. He drives Billie wild, sending her too close to the edge for her own good. And she won’t fall under his spell—or into his bed—without a fight.

At the sound of the soft, chirpy, feminine voice, Travis blinked and shook his head, trying to shake the memories and bring himself back to the now. He’d been so lost in the past he hadn’t even noticed the piano playing had stopped. He turned his head to focus on the figure standing beside him and almost swallowed his tongue. Heat flooded his body as he looked his fill at the sexy little specimen in front of him.

Turned out the piano player he’d written off as an asshole looked nothing like one after all. And he was a she. A very curvaceous she, with a short, mussed-up blond bob that made him want to slide his fingers up into her hair and yank her mouth to his. And Australian, if her accent was anything to go by. Although she looked curiously at him, her glossy-lipped smile was brighter and more real than any he could ever recall. It stretched across her whole face, lighting up her deep blue eyes. Travis took a moment to lower his gaze, raking it over her body—magic tits that made the palms of his hands itch without even touching them, a slim waist and hips to die for. Even though she wore a flowery skirt so long it brushed the floor, he couldn’t help but imagine her legs wrapped around him. His dick tightened and he thought about how hot it would be to expel some of his anger and frustration inside her.

She cleared her throat and repeated herself. The smile was still as wide as ever, but the friendliness in her tone had gone down a notch. “Can I help you?” she asked again, pointing to a painting on the wall he hadn’t realized he’d been staring at. One of those weird rabbit/balloon ones. “Do you like that? The artist is a local and so incredibly talented. There’s a story behind each of his canvases.”

Travis raised an eyebrow. “How much?” he asked, out of curiosity. It’d be a cold day in hell before he’d spend even a couple of bucks on a piece of garbage like that. He’d worked his ass off to get where he was today and wasn’t about to throw his hard-earned cash away on crap. The sexy piece of skirt standing in front of him was much more in line with his taste.

“The artist likes to speak with potential buyers first.” The woman bit her lower lip and his cock tightened as he imagined biting it himself. “Get an idea of your situation and your passion.”

In other words, thought Travis, trying to focus on her words rather than her body, the artist was a money-hungry prick who liked to meet his buyers to work out how he could rip them off.

“Do you want me to call him for you?” she asked, her tone enthusiastic.

“That won’t be necessary.” He took another glance around. “I could go down to the local elementary school and get something more to my style.”

Shock flashed across her sweet face, and then she opened her mouth as if to say something, but bored with talking shit, he cut in. “Where’s Billie?”

She blinked and then crossed her arms over her impressive rack. “Who wants to know?”

So the little flower child had a backbone. He liked a smart mouth on a woman. He liked a good body and a pretty face too. All these things made for a more interesting lay. What he didn’t like was all this new age crap and this girl was the fucking embodiment of that, from her long skirt and bare feet to the T-shirt with a painted mermaid on the front and the actual flower in her hair. She was probably one of the artists. No doubt she also read tarot cards. Real fucking shame.

“And who exactly is Travis Sinclair?” She perched her hands on her hips, which inadvertently thrust her tits upward. Nice. His mouth watered.

“The new landlord of this place.”

“And you are?” She took only a moment to recover, then sighed and rubbed her lips together before finally replying. “I’m Billie Taylor. The tenant.”

“You’re Billie?” It was his turn for shock. And he hated to be shocked.

Was this Sophie’s idea of a fucking joke? He’d told her his intention to stay in a room
at the old clubhouse, and she’d let him believe Billie was a man. No way he was staying at The Priory with Ajax calling the shots. It was bad enough that Travis couldn’t walk away from all this shit, but that wasn’t an option.

He wished he had it in him just to give Sophie his share of the inheritance, ride out of this fucking city and never come back. None of them actually needed the real estate—he and Micah had enough money now to never want for anything, and Leon had lived in a fucking bayou for the last decade. By choice. He wasn’t right in the head. And neither was Ajax, which was why giving Sophie his share wasn’t an option. Looked like she and Ajax were together now, which meant he’d be essentially giving his share to Ajax.

Not in this fucking lifetime.

“Yep. That’s me.” The blonde lifted her chin high and hit him with another smile, but this one wasn’t friendly at all.

Rachael Johns is an English teacher by trade, a mum 24/7, a supermarket owner, a chronic arachnophobic, and a writer the rest of the time. She rarely sleeps and never irons. She writes contemporary romance for HQN and Carina Press and lives in rural Western Australia with her hyperactive husband and three mostly-gorgeous heroes-in-training. Rachael loves to hear from readers and can be contacted through her website at www.rachaeljohns.com. 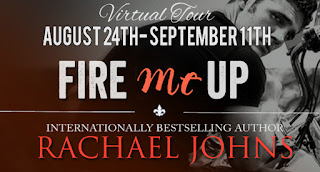