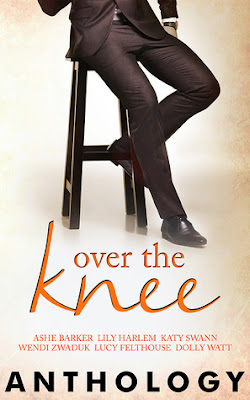 Buy Links: Amazon - B&N - Totally Bound
**This anthology will be available on Amazon and B&N on October 20th.**
Add to Goodreads

A momentary lapse of concentration places Libby Novak on the wrong side of the law. A criminal conviction could cause her to lose her job. How much worse could this get?

Libby soon knows the answer to that question when the head of security at the mall shows up. She hasn’t seen her estranged husband for years, and now she discovers Josh has a strict policy on how best to deal with shoplifters. He was her husband and her Dom. Will he turn her over to the police, or would a hard, bare-bottom spanking be sufficient redress for her misdemeanor? After all, that’s how he always dealt with her in the past.

Josh has never forgiven Libby’s betrayal. She let him down. She deserves to be punished. But does he still have that right?

Libby meant to divorce him. She was granted the decree nisi but never quite got round to making it final. They both know she’s still his wife—in the eyes of the law—but is she still his submissive? His to spank?.

Spicing it Up by Lily Harlem
Heat from a spanking ensures that Cassandra simmers with pleasure in a way she never would have imagined.

Cassandra lives by a set of rules that both thrill and complete her. Having Master Raif attend her every need in and out of the bedroom is perfection. She trusts him absolutely, and he wields his power over her with a great sense of responsibility.

There is only one thing for it, and that’s to smile through the evening and let the anticipation build. When it finally happens and she gets what’s coming to her, Cassandra knows she’ll never look at spice the same way again. The heat is intense, the burn scorching, and her Master takes her to new highs that make her sizzle with satisfaction.

Kneel for You by Katy Swann
Should she agree to be spanked? Just the once? It would all be in the name of research, of course…

Returning to the club and watching the scenes around them reminds Kirsten what she’s missing. She’s envious of the girl being flogged by her Dom nearby, but she’s so busy denying it that she doesn’t recognize the burning need inside her. Until she spots Eddie—a colleague she’s got a secret crush on—working in the club as a Dungeon Monitor.

Eddie reintroduces her to the joys of Dominance and submission, the delicious sting of a spanking and the incredible sex that follows. But is she strong enough to conquer her fears?

Silk and Decadence by Wendi Zwaduk
There is always fun in the club, but taking the fun outside and into life might be exactly what’s needed for a lifetime of passion.

Elias likes his no-strings life, but once he plays with his mystery woman he rethinks his choice. She responds to him and his spankings like no other, making him want to break his rules. He longs to reveal his identity to her, but the risks could outweigh the reward. Will the relationship survive outside the club?

He’s about to find out just how decadent a little complication, complete with silk and spankings, can be.

Properly, or Not at All by Lucy Felthouse
How will a husband and wife cope when they’re told one of their favourite kinky pastimes is temporarily off the menu?

Tristan and Jayme are not only devoted husband and wife, they are also Dominant and submissive, with a particular penchant for spanking. They’ve been playing delicious kinky games for the fifteen years they’ve been together and couldn’t be happier. However, when Tristan develops a health issue that means he can’t redden his wife’s backside for a while, it puts both of them under a lot of strain. It’s a big part of their sex life and one they’ll miss badly.

They try to find a way around their unfortunate predicament, but it’s not easy. In the end, Tristan declares that he will either spank Jayme’s bottom properly, or not at all.

The prospect of no spanking at all dismays Jayme, but she has no other choice. Or does she? Continuing to put her mind toward the issue, she indulges in some solo experimentation, with mixed results.

But how will Tristan feel when he finds out his wife has gone behind his back?

When archivist Emma Willoughby is invited to assess the private library of Lord Leopold Denby-Peel, Ninth Earl of Folchester, she isn’t expecting to find Victorian spanking diaries in his leather-bound collection. Nor is she expecting the earl to be quite so young and handsome. As she explores the pages of his nineteenth-century erotica, Emma finds herself craving to receive chastisements comparable to those depicted. Fortunately, Leo’s only too happy to oblige, and soon Emma is receiving eager spankings from him as he sets her tasks that she can only fail at.

Emma is new to this game of punishment and pain, while Leo’s an old hand who shows no interest in love. Emma dreams of winning him over, but has a guilty secret she fears could ruin everything. Should she stay quiet and enjoy the spankings while they last? Or confess the truth and risk losing the earl’s dark, deviant desire?

In the Eyes of the Law by Ashe Barker - Second chance romance...with a kick! And a spanking... And... Well, you get the picture. I've read and loved Ashe's stories before and this one was no different. However, I did wish it was longer just so we could explore their relationship more. Yum!

Spicing it Up by Lily Harlem - Not going to lie, I was kind of hoping this one was going to take a different turn. It was a fun little story with a whole new use of ginger.

Kneel for You by Katy Swann - I loved this one!! The combination of sizzling hot sex with just a hint of sweetness. I need to read more from Katy! Stat!

Silk and Decadence by Wendi Zwaduk - You. Go. Girl. Another new to me author that I can't wait to read again. I loved the fact that although this is a story of submission, it is the heroine that takes charge and seeks out her man.

Properly, or Not at All by Lucy Felthouse - Another one that I was hoping would go a different way. I liked the relationship between the characters and that they had the chance to show the amount of emotions that go into this type of relationship.

Ashe Barker
Until 2010, Ashe was a director of a regeneration company before deciding there had to be more to life and leaving to pursue a lifetime goal of self-employment.

She draws on settings and anecdotes from her previous and current experience to lend colour, detail and realism to her plots and characters, but her stories of love, challenge, resilience and compassion are the conjurings of her own imagination. She loves to craft strong, enigmatic men and bright, sassy women to give them a hard time—in every sense of the word.

When she's not writing, Ashe's time is divided between her role as resident taxi driver for her teenage daughter, and caring for a menagerie of dogs, cats, rabbits, tortoises and a hamster.

Lily Harlem
Lily Harlem lives in the UK with a workaholic hunk and a crazy cat. With a desk overlooking rolling hills her over active imagination has been allowed to run wild and free and she revels in using the written word as an outlet for her creativity.

Lily's stories are made up of colourful characters exploring their sexuality and sensuality in a safe, consensual way. With the bedroom door left wide open the reader can hang on for the ride and Lily hopes by reading sensual romance people will be brave enough to try something new themselves? After all, life's too short to be anything other than fully satisfied.

Katy Swann
Katy Swann is in her forties and lives near London, UK with her husband, three children and two cats.


Coffee, chocolate and cats are her favourite things and are often close by when she sits down to write.

Wendi Zwaduk
I always dreamed of writing the stories in my head. Tall, dark, and handsome heroes are my favourites, as long as he has an independent woman keeping him in line.

I earned a BA in education at Kent State University and currently hold a Masters in Education with Nova Southeastern University.

I love NASCAR, romance, books in general, Ohio farmland, dirt racing, and my menagerie of animals. You can also find me at my blog.

Dolly Watt
Dolly Watt has been spinning saucy stories in her head for over a decade but has only recently sat down at a keyboard and allowed her imagination to run riot. And oh boy, does it run!

Dolly (Dolores for long) lives in rural Sussex with her handsome husband, their two kids, and a growing menagerie of pets in a house she describes as ‘shabby chic’ in the hope of convincing herself it doesn’t resemble an explosion at a jumble sale.


Dolly is working on a number of short stories while the house falls down around her, and the children turn feral.