Spotlight & Excerpt from THE SWEET SPOT by Stephanie Evanovich 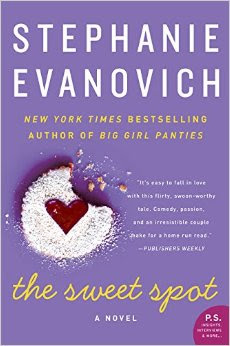 When pro baseball player Chase Walker first meets Amanda at her restaurant, it’s love at first sight. While Amanda can’t help noticing the superstar with the Greek-god-build, he doesn’t have a chance of getting to first—or any other—base with her. A successful entrepreneur who’s built her business from scratch, Amanda doesn’t need a Prince Charming to sweep her off her feet. And a curvy girl who likes to cook and eat isn’t interested in being around the catty, stick-thin herd of females chasing Chase and his teammates.

But Chase isn’t about to strike out. A man who isn’t interested in playing the field, he’s a monogamist who wants an independent woman like Amanda. His hopes rally when she discovers that squeaky-clean Chase has a few sexy and very secret pre-game rituals that turn the smart, headstrong businesswoman on—and into his number one fan.

Then a tabloid discovers the truth and turns their spanking good fun into a late- night punch-line. Is Amanda ready to let loose and swing for the fences? Or will the pressure of Chase’s stardom force them to call it quits?

Amanda stomped in through the Cold Creek’s front door and slammed her purse on the bar with a loud thud.  Eric and Nicole were going through the beer cooler’s inventory in preparation to stock up from the basement whatever they would need for the evening.  Eric was a lanky blonde blue eyed surfer boy who had been accepted to Harvard, but opted for Bartending School instead when he realized how late he liked to sleep.  All his savings and vacation time were spent in search of the perfect curl.  In between budgeting, he felt New Jersey waves were as good as anyplace else, and he could be close to his family.  Nicki was a free spirited Seaton Hall drop that Amanda had known since high school out who was trying to break into acting.  She was a petite, vivacious brunette who had a great horror movie victim scream, but her booking to audition ratio was often disappointing.  She did her best to stay optimistic, paying her dues, as they all called it.  Eric was a few years younger but that didn’t prevent him and Nicki from becoming fast friends as well as roommates. Although nobody got involved, it was common knowledge that the two were known to hook up now and again, usually the result of her not getting the call and his ability to make the best commiserating cocktail.  Amanda didn’t care if they shined the bar with their butts, as long as they could work together, did it after closing and cleaned up afterwards.

Eric looked up briefly from his clipboard and then took a double take as Amanda approached their end of the bar.

“Yikes,” he said, his face scrunching up in distaste, “Hope that’s not a fashion statement.”

“Bird,” was Amanda’s one word reply as she proceeded past them.

“Geez, what was that thing eating?” He said, casting a quick look to his counter-part.

“It’s supposed to be good luck!” Nicki called out while Amanda began disappearing within the ladies room.

“Not feeling it,” Amanda could be heard snapping as the door closed behind her.  She walked up to the mirror over the sink to best assess how to clean the mess up.  It had begun to drip further down, appeared to be soaking into the thick black hair she spent a half hour blowing dry.   She took a deep breath.  This was nothing more than a problem that needed solving.  She had this.  First she took some toilet paper and tried to scoop as much as she could with one grab.  It got the bulk of it, but the parts left behind were now successfully smeared deeper into her hair and beginning to clump together.  She wet some more tissue and tried to wash the remainder out, but it started to decompose in her hand and her hair, leaving bits of it behind and adding to the mix.  She took one more handful of tissue and wet it again but this time left it too soaked.  When she tried to gently squeeze it over the affected hair, the overflow dripped down her hand and onto the front of her blue silk Jones of New York blouse, leaving a wet spot directly over the center of her ample right breast.

“Really?” she shook her head in disgust at her reflection in the mirror.  Not only did she have bird shit and toilet paper remnants in her hair, now she looked like she was lactating.

She had only managed to make things worse.  Giving the shirt priority, she tried the hand dryer for it.  After a minute, it dried up the moisture but left a rather large off color stain where the water had been.  It no longer looked like she was lactating, but merely that she had lactated.  The right side of her head was now crunchy.

Amanda stormed out of the bathroom, back to the bar where Eric and Nicki were now waiting.
“You can barely notice it,” Nicki said after staring for a minute.

“Are you kidding?” Eric took the more direct approach.  “It looks like a pterodactyl flew over her after a chili cook-off.”

Amanda closed her eyes, bit her lip and began counting.  When she reached eight the phone rang.  She quickly fired off nine and ten out loud and went back near the front door. 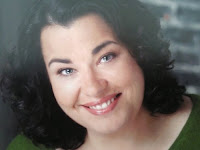 Stephanie Evanovich is a full-fledged Jersey girl from Asbury Park who began writing fiction while waiting for her cues during countless community theater projects. She attended New York’s School of Film and Television and acted in several improvisational troupes and a few small-budget movies, all in preparation for the greatest job she ever had, raising her two sons. Now a full-time writer, she’s an avid sports fan who holds a black belt in tae kwon do.