Spotlight: Lost in Tennessee (Lost In #1) by Anita DeVito 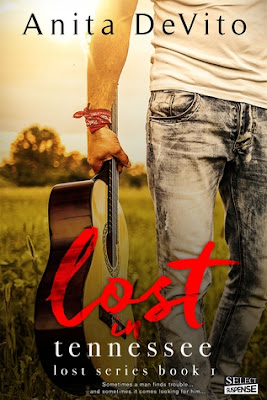 Heartache makes for good country music. It’s what country superstar Butch McCormick keeps telling himself. He’s done with women and can’t handle one more disappointment. He’s taking a few months off to work on the old house on his parents’ land to fix shutters, scrape paint, and figure out what he wants in life…

Then she appears out of nowhere, with red hair and a peaches-and-cream complexion…and just so damned lost.

Architect Kate Riley doesn’t have the luxury of getting lost, having a damaged car, or being smitten by a sexy-talkin’ cowboy with an irresistible smile. But the longer Kate stays at Elderberry Farm, the stranger things get. For one, there’s the crazy chemistry between her and Butch. For another, dead bodies are starting to turn up…and Kate might be the murderer’s next victim.

Anita's rapid paced storytelling style pulls readers into a parallel universe where mystery, mayhem, murder are the order of the day. Her stories are an addictive diversion, trading the heavy, gray world of real life for a fantastically colorful world where bad is good, and cool is smoking hot.

Raised on America's Rock Coast in Cleveland, Ohio, Anita was born while the river burned. Music, food and family shaped Anita's life and provide much of the fodder for her stories. Her love of mysteries and puzzle solving came from her Grandpa John, who introduced Anita to her first detective hero – Nero Wolfe. Food was as central a character in Anita's life as it was in Nero's, where Sunday dinner at Nonna's table was a command performance. Music plays a major role in the development of her characters and the expression of their personalities. A novice guitar player, Anita's only regret was that she didn't start younger.

Anita has been writing scorching mysteries and suspense since 2006 with stories ranging on the heat index from a "nice spicy little pepper" to "pass a mop for my forehead, please." Check out tastes of Anita's stories and like her on Facebook. Anita is a member of Sisters in Crime and Mystery Writers of America.