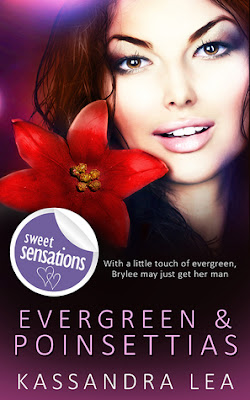 "All I want under my tree is someone to love." - Brylee Mariotte

Buy Links: Amazon - B&N - Totally Bound*
*Title is available as early release on the publisher's website until the general release date when it'll be at other retailers.
Add to Goodreads

Brylee Mariotte is hoping to get a boyfriend for Christmas, and when she meets Liam Casey, it looks like she might just get her wish.

It’s the magical holiday season again and, like everyone else, flower shop owner Brylee Mariotte can’t help but get swept up in it. Of course, the phrase ‘happiest time of the year’ only makes her loneliness worse. As she watches the happy couples, she starts wishing and hoping for Santa to bring her a man to call her own, and not just for the holidays. She wants the real deal—someone for the long haul.

When the dashingly handsome Liam Casey offers her a helping hand, Brylee begins to think that miracles might just exist. The bookstore owner’s touch lights a fire deep inside her, one she thought would never get burning. But what if Liam isn’t as into her? Or, even worse, what if he’s already married?

With a little touch of evergreen and a whole lot of Christmas magic, Brylee may just get her man.

Confession time... There is one moment that always makes me swoon when I'm watching or reading a holiday romance. The magical moment when you least expect it... The moment where you meet the one person that'll turn your world upside down. During the hustle and bustle that is the holiday season, the moment where time stops is ethereal. Toss in some holiday cheer with a bit of snow and you've got the makings for a sweet, romantic holiday romance. Evergreen & Poinsettias is a sweet short story about the magic of that moment. The only thing of Brylee's Christmas list is love. Watching happy couples enjoying everything special about the holidays breaks her heart. When Liam suddenly appears, fate (and Santa) seems to have stepped in. I loved this sweet little novella.  Everything about Evergreen & Poinsettias warmed my heart. Kassandra's writing is stellar. Although it is a short story, the length was perfect. Short and sweet, it is the perfect romance to get your holiday started in the right way.

Less than two weeks before the biggest holiday of the year, Brylee Mariotte strolled along the fringes of the park, clutching at a long rectangular box wrapped with a red Christmas bow. Snow crunched under the heels of her boots, the chill of the December wind nipping at her cheeks and making the tip of her nose go numb. Everything about the day seemed perfect, from the children throwing snowballs to the couples ice skating on the pond at the park’s heart. The town was basically ready to grace the front of a postcard, the quintessential picture of a small town during the holidays.

The black antique-style lampposts were wrapped with red and green ribbons. At night the evergreens in the park twinkled in their suits of golden-white Christmas lights. Up and down Main Street the businesses boasted splashes of evergreen and cut-out snowmen and the pharmacy had even set a cotton-stuffed Santa on the bench out front. With a blanket of white covering the town, Brylee sometimes thought she had strolled onto the set of one of those holiday romance movies they were always showing on television this time of year.

The only problem with that scenario being the severe lack of love in her life. Aside from a little black furball eagerly awaiting her return home, she would be spending the holidays alone. Again.

She paused, watching the skaters flow effortlessly over the ice, the couples stirring up a deeply rooted ache within. Christmas was the time for magic and miracles, and spending time with loved ones, creating a slew of new memories to reflect back upon. With her parents divorced and living on opposite coasts, and her older sister overseas, thanks to her husband’s job, Brylee was left to choose between crashing her friend’s feast or staying holed up in the house. Normally she opted for the feast, her friend being an amazing cook and generous enough to invite her over, but this year as the fateful day grew closer she found herself with a definitive lack of cheer and wanted to avoid bringing others down. Tomorrow she’d run by the market, pick up a few things, and return to the solitude of her house and the never-ending love of her cat.

A peal of laughter tore her gaze from the frozen pond and its spectators to a young woman with a man at her back, his arms wrapped lovingly around her waist. They reveled in a moment of private joy, clearly increased by the presence of a little black box he withdrew from a coat pocket. Brylee turned away, unwilling to watch the scene play out. Unshed tears stinging her eyes, she clutched her box tighter to her chest and resumed her journey. All around her, people seemed to be caught up in the frenzy that came with every Christmas, most of them rushing around, probably trying to find the perfect gift. She would go no further than exchanging cards with her family and she already had a little something stashed away for her friend. Inside all the shops, she knew, there would be deals and steals, the ever-present jingle of carols pumped from hidden speakers.

Back home, things were a little less cheery.

Born to a military family, just outside the nation’s capital, Kassandra Lea has been reading since she could hold a book. Growing up she wanted to be a horse or Batman, then she discovered writing and realized she could be whatever she wanted if she lived vicariously through her characters. When not writing, she can be found hanging out with her dog, driving flashy cars, pursuing her love of horses, and cheering on the Packers. She lives in southern Wisconsin in an old house with her mother, a gang of furry monsters, and a ghost lovingly dubbed Bob.