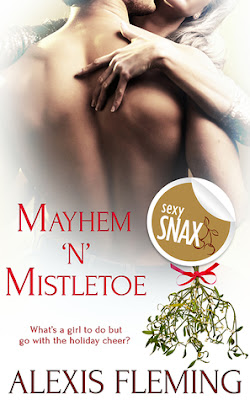 "Not so fast, my little elf. First I want to taste." - Zane Mason

Buy Links: Amazon - B&N - Totally Bound*
*Title is only available for early release on publisher's website. It will be available at other retailers on the general release date.
Add to Goodreads

WANTED FOR TOO MUCH CHEER: Misty Toll. Dealer of mistletoe, aka Happy Juice. Be extremely careful. Too hot to handle.

When Christmas is declared illegal, Misty Toll finds herself dealing mistletoe juice to fund Santa’s revolution to bring back Christmas. But Santa’s addicted to his own product, Rudolph’s red nose is from too much vodka, and there’s a bunch of rabid revolutionary elves on the run.

Then there’s the delicious Scrooge, Zane Mason, the new man hired to work on the deer farm. The same farm where she’s hiding Santa’s reindeers and her secret stash of mistletoe.

What’s a girl to do but go with the holiday cheer?

Holy holly berries! A fantastic combination of sass and sex, Mayhem 'N' Mistletoe is sure to put anyone in a festive mood, even the naughtiest Scrooge. From a slightly inebriated Rudolph to black market happy juice, it kept me in stitches all night. Misty and Zane were fabulous. Even on opposite sides of the law, their sexual tension scorches from the moment they met. The sexy time between them... Holy holly berries is right! A whole lot of punch packed into this sexy and fun holiday romance.

Zane Mason, special undercover agent for the federal government, heard the feminine shout, but before he could check out where it had come from, something hit him smack on the ass. He teetered, arms flung out in an effort to steady himself. The white pebbles he’d collected sprayed in an arc around him.

“Ah, hell.” Balance shot to pieces, over he went, head first into the cold water.

Within seconds, he surfaced. He spat out a mouthful of water and let loose with a colorful string of inventive swear words. Floundering and flapping like a bloated schizophrenic seal, he made his way to the side of the pool and hauled himself out, staring at the woman who had skidded to a stop at the edge of the paving surrounding the swimming pool.

“W-what the fuck?” His teeth chattered and goosebumps covered the exposed skin on his arms where he’d rolled his sleeves up. “Sorry for the language, ma’am, but why did you push me in the pool? What the hell’s wrong with you? That water is freakin’ freezing.”

Zane couldn’t believe his luck. The boss had told him to get close to Misty Toll, but he hadn’t expected it to happen quite like this. Hell of a way to start an investigation. He’d expected another boring job, but if it continued like this… Wow, baby, sex on legs.

He dragged his mind off his rapidly rising libido and tried to think of the case. Australia had been one of the last countries to declare Christmas illegal, but with the election of the Personal Instigation of Somber Souls political party—PISS if you were of a mind to be irreverent—a couple of years ago, that had all changed.

The new leaders had taken a firm stand, having decided that the escalating rate of violence in the country would be curbed if people stopped acting on their emotions. Along with all of the other celebratory holidays on the calendar, part of the new regime was to ban Christmas. It was a proven fact that more crime happened during that particular vacation time—increased burglaries, more violence against persons, home invasions. The list went on and on, and that was before the authorities took into account the suicides committed by the heartsick and lonely.

The American Government had loaned him out for an extended period to the Australian police force. He’d been a deep undercover agent for a long time and had an outstanding record for squashing emotional crimes in the United States. Which was how he’d ended up in Australia, working undercover again. Hell, he was so deep in, no one but his immediate superiors even knew his real name. He’d figured he’d only be here for a couple of months, but he’d already racked up three years and counting. Not about to let him go once they had him, they’d used his expertise to train the new agents for PEED.

Christ, he hated using that acronym, but it was too big a mouthful to rattle off Provisional Elimination of Emotions Department when he tried to tell people where he worked. To be quite honest, once upon a time he hadn’t seen anything wrong with Christmas. He had some great memories of this particular seasonal holiday.

Hell, his father had been a shopping mall Santa Claus for years. Until some drunk, high on crack as well as alcohol, had taken a knife to him in the middle of a robbery. When the case had come to court, the guy had tried to argue that he’d needed the pittance Zane’s father had collected to feed his kids. What a load of crap. It had been greed, plain and simple, and had left a bitter taste in Zane’s mouth and a big hole in his heart. Which was how he’d ended up working for PEED.

Although he did feel sorry for the parents who just wanted to bring a little Christmas cheer into their kids’ lives. They were the ones hurt by the new laws. Maybe it was time to change jobs, because sometimes he hated what he did for a living.

Alexis Fleming is one of those strange people who live inside their mind. No, she doesn't hear little voices… Well, she does, just not the type you're thinking of.

Alexis' world is peopled with interesting characters and exciting possibilities that come to life in each and every book she writes. Her first love has always been romance, whether on this world or the next. Hot, sizzling relationships with a dash of comedy and a few trials and tribulations thrown in to test her characters.

When she's not tied to her computer creating sizzling stories to tempt her readers, she helps run a busy motel set on the edge of a National Marine Park in Australia. What better place to get inspiration for the tales she turns out? A glorious sunset over the ocean, dolphins playing almost in her front yard, suntanned bodies lazing on the sand… How could she not get caught up in the eroticism of that?