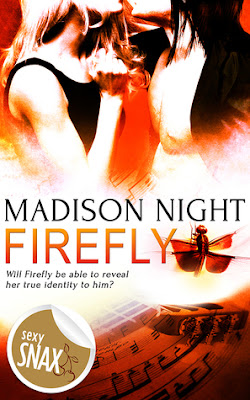 "I want you." - Desmond Carlisle

What would you do if the Rock God you’ve lusted over for years suddenly showed up at your doorstep…and wanted you just as badly?

Libby Hill, a classically trained dancer whose dreams were dashed by chronic knee pain, runs a quaint coffee shop, The Bean, in Las Vegas. Although her days are filled with the aromas of Irish Cream and rich Columbian, her nights are filled with something much different—Libby is a dancer at the infamous Tommy Rocker’s, a local topless strip club. On stage, she transforms into the seductive and ever-confident Firefly, dancing for and teasing the men transfixed by her presence.

Desmond Carlisle is in Vegas for a week, desperate to get away from the daily pressures of his shattered home life and rock-star celebrity. He’s keeping his presence in the city low key, deciding to avoid all the hot spots, and instead frequenting quiet venues and cafés, like The Bean. He needs a distraction, and he’s hoping one just might come his way in the form of a delicious topless dancer with his band’s logo tattooed on the small of her back.

Okay, let's take a moment to put ourselves in Libby's lucky shoes. If you are single and had a sexy alter ego, would you live out your fantasies with a celebrity crush? In Madison Night's Firefly, Libby has the chance to live out her ultimate sexual fantasy with rock god Desmond as her much sexier alter ego, Firefly. One erotic night turns into two and Desmond still can't take his mind off of the sexy little minx. Libby's world is rocked when he starts appearing at her little coffee shop. She's not proud of Firefly, but damn it, she's good at it. What will he do if he ever found out that the shy little Libby was his sexy siren?

Oh, holy mother of hotness! This little sexy snax was freaking amazing. Firefly and Desmond were so damn hot together. I loved Libby being turned into a bumbling mess whenever Desmond is in her coffee shop. His eagle eyes spot everything and boy do things heat up in a flash. Firefly was the perfect length, a little sample of the author's writing style. Just long enough to leave readers (and the characters) satisfied, yet wanting more from author Madison Night.

The loud thump of a box hitting the floor, the squeak of sneakers on linoleum and the high-pitched whisper of “Oh my God” from behind her made Libby Hill turn, fully expecting to see her café burning to the ground.

Instead, she saw her employee, Claire, skidding around a corner and racing in her direction.

“You’re never going to believe this,” Claire shrieked. She grabbed Libby’s arm and began pulling her toward the front counter.

Libby wiggled free of her friend’s tight grip. “Holy shit, what’s the matter with you?” She dropped her clipboard and a bag of coffee beans to the ground.

“Look, look. Quick, before he leaves!”

“Before who leaves?” she asked. “C’mon, Claire. I’m in the middle of inventory.”

Claire latched on to her arm again, and this time Libby’s curiosity got the best of her and she allowed herself to be led away from the stacks in the storeroom.

No way. She didn’t have that kind of luck. Her favorite guitarist from her favorite band? In her sleepy shop? Things like that never seemed to happen to her.

Libby snuck a glance at the cream-and-sugar station near the front of the shop and saw nothing but the back of a man. She cocked her head to the right and studied him as he stirred his coffee. He had dark hair, coming just to his shoulders. He towered over the other clientele, standing over six feet for certain, and under a T-shirt that fit him like a second skin, she could tell he worked out on a regular basis. His muscles rippled beneath the navy-blue cotton every time he moved.

Her gaze traveled south, and she took in narrow hips that tapered down into a pair of blue jeans, a nice tight ass and long legs. The corner of her mouth twitched upward and her gaze moved back up to his backside. He turned around right then, and she found herself staring straight at his crotch. The bulge there left nothing—and everything—to the imagination.

And Lord knows the imagination I have, she thought, her cheeks growing warm.

Libby looked up, hoping to see his face, but he turned before she caught a glimpse. He headed toward the door. The little bell chimed as it opened and closed, and he was gone.

“It can’t be him,” Libby whispered, stunned. “Why would he be here? Shouldn’t he be recording or something?”

“What? Are you kidding me? Are you blind? You were staring straight at him.”

Grinning sheepishly, Libby ducked her head and tucked a stray piece of blonde hair behind her ear. “Yeah, um. Sorry. My eyes kind of got stuck about here when he turned around,” she said, pointing to her hips.

“Look, if you’re right on this, do me two favors, okay?” She paused, waiting for Claire to nod in agreement before continuing. “First, do not, under any circumstances, harass him. Don’t go telling people he’s been here. Let him have his privacy. Second—and perhaps most important—if he comes back into the shop, come find me right away.” Libby grinned. “Don’t let him leave without giving me a chance to ogle that great ass of his again.”

Claire guffawed and smacked Libby’s arm playfully. “I like the way you think. And don’t worry. I’ll be hush-hush. I promise.”

“Thanks. Now can I get back to the dreaded inventory?”

“I’ll hold the fort out here, boss.” Claire saluted and turned her attention to brewing a fresh pot of coffee.

Libby made her way back into the storeroom. She scooped up her clipboard and pencil off the ground and started her weekly ritual, making sure she had enough beans, sugar, cups, et cetera on hand for her little coffee shop to run without a hitch for yet another week.

But she’d be damned if she could concentrate.

Madison Night has fiddled with the written word for years—be it in song, story, or poem. A high school creative writing class piqued her interest in storytelling, and she’s been writing ever since.

A devoted mother of one human child and two fuzzy puppy children, Madison currently resides in Toronto, Ontario. In her spare time she sings and writes music, dabbles with interior decorating, and has a blast chasing her son around the house.