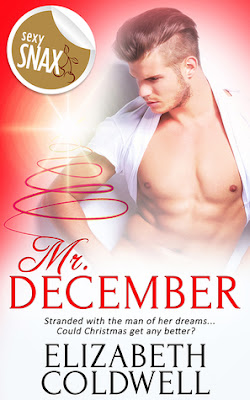 Stranded with the man of her dreams—could Christmas get any better?

December is Nicki Lamont’s least favorite month. Last year her boyfriend left her for an old girlfriend he reconnected with online, and this year she’s been sent to Cornwall to photograph model Bryce Anderson in his underwear. It should be a dream assignment, but Bryce is as arrogant and difficult as he is hot.

Nicki wants to wrap things up quickly, but when a power failure strands her with Bryce in his manager’s clifftop home, she realizes they could be forced to spend the whole of Christmas together. As they try to make the best of the situation, Bryce’s icy exterior thaws and Nicki sees a side of him she likes very much. When she lets down her own barriers, things between them heat up. The sex is spicy and passionate, but can what they have become more than a Christmas fling?

Be honest... Who here would grab the chance to be stranded on a stormy Christmas night with the man of your dreams? Be it your boyfriend, husband, or, for the single ladies here, a man you've lusted after ever since you met him. In Elizabeth Coldwell's Mr. December, Nicki finds herself stranded with the man that has not only been a thorn in her side, but also the subject of her naughtiest fantasies. From the publisher's Sexy Snax imprint, Mr. December was a little bite of scrumptious fun. It was a super quick read that kept me warm on a chilly December night with its fun writing, witty characters, and some steaming hot sexual tension.


I never realized how much I hated December till I turned the page on the calendar to see Bryce Anderson’s face pouting back at me.

Lounging against a pile of boxes wrapped in shiny gold, silver and green paper, he wore a red robe, edged with white faux fur. The material was arranged over his groin in a fashion designed to make it very clear he had nothing on underneath it. Long-limbed, tan, and with just a hint of stubble on his chin, Bryce was what every girl hoped to find under her tree on Christmas morning. But I wasn’t fooled by his dark, come-to-bed eyes. I knew what Bryce was really like.

Looking at that photo, I was whisked back to the day, sixteen months ago now, when I’d taken it. It was the first time I’d worked with Bryce, who at the time was well on his way to becoming the hottest, most sought-after male model in London. It had been a sultry August afternoon, and the fan whirring in the corner of my studio had done little to dispel the heat. I knew it would take a real stretch of the imagination to create an air of Christmas magic.

Bryce had arrived fifteen minutes late for the shoot. He’d been full of apologies, blaming the traffic on the way out to the warehouse apartment in Docklands that doubled as my home and studio space, but already I’d sensed that we were not destined to get along. He’d been aloof, clearly considering himself above posing for beefcake shots like those I’d been asked to provide. I did a lot of work for agencies, providing stock photos to be used on book jackets, websites and for promotional material, and my brief for that afternoon was sexy Santa. I’d sketched out a number of scenarios for Bryce, most of which involved him wearing—or almost wearing—the robe and matching fur-trimmed hat. I’d never expected him to look quite so sexy in the outfit, and as he’d stepped out from behind the screen where he’d been changing out of his T-shirt and baggy shorts, I’d felt an unexpected rush of lust.

“I can’t believe you asked me to put on this clichéd piece of crap,” he’d drawled, his words like a cold shower on my naughty fantasies about sitting on Santa Bryce’s lap.

“It’s what the client asked for,” I’d replied, doing my best to ignore his rudeness. If you don’t like it, I’d itched to add, why don’t you just get dressed and leave? Oh, but then you won’t receive your modeling fee, will you?

He’d gone on to complain about pretty much everything—he didn’t like the brand of bottled water I’d kept in the mini-fridge in my studio, or the selection of fruit and chocolate I’d put out for him to nibble on. Worse than that, he hated my choice of music. I’d dug out Phil Spector’s Christmas album, which never failed to get me in a festive mood with its jingling sleigh bells and layered harmonies, but he’d moaned that listening to it was like being stuck in a provincial shopping mall. By the time he’d stripped down for the final few shots and was holding one of the fake parcels in front of his crotch to conceal his nakedness, I’d no longer cared how sexy he looked or how many times these photos would be downloaded for use. Bryce Anderson, I’d decided, was a grade A pain in the arse and if I never worked with him again, I’d be a very happy woman.

Elizabeth Coldwell is the author of numerous short stories and two full-length novels, 'Calendar Girl' and 'Playing The Field'. Her stories have appeared in the best-selling 'Best Women's Erotica' series and Black Lace's popular 'Wicked Words' collections. Formerly the editor of the UK edition of Forum magazine, she now contributes a spicy monthly column, 'The Cougar Chronicles', to its pages. When she is not busy writing, she is an avid supporter of Rotherham United Football Club and can be regularly found on the terraces at weekends, cheering her boys to victory (hopefully!).

Posted by CrystalBee at 9:43 PM