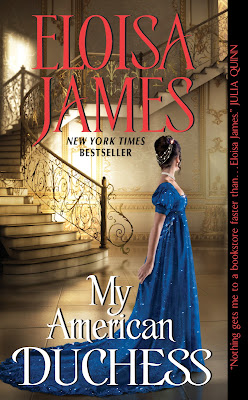 
The arrogant Duke of Trent intends to marry a well-bred Englishwoman. The last woman he would ever consider marrying is the adventuresome Merry Pelford— an American heiress who has infamously jilted two fiancés.

But after one provocative encounter with the captivating Merry, Trent desires her more than any woman he has ever met. He is determined to have her as his wife, no matter what it takes. And Trent is a man who always gets what he wants.

The problem is, Merry is already betrothed, and the former runaway bride has vowed to make it all the way to the altar. As honor clashes with irresistible passion, Trent realizes the stakes are higher than anyone could have imagined. In his battle to save Merry and win her heart, one thing becomes clear:

All is fair in love and war.

Merry stared down at his buttery curls, scarcely believing this was actually happening to her. She had to force back a nervous giggle when Cedric complemented her finger for its slenderness before slipping on a diamond ring.

It felt as if she were on a stage, playing a role meant for a delicate, feminine Englishwoman. That actress hadn’t shown up, and storklike Merry Pelford had taken her place.

But at 9:02, after Cedric’s lyrical proposal drew to a close, she forced back a nervous qualm and agreed to become his bride.

Back in the ballroom, Merry’s guardian, her aunt Bess, didn’t seem to realize that Cedric and Merry were mismatched. “The two of you are exquisitely suited, like night and day,” she said, eyeing Cedric’s yellow hair. “No, midnight and the dawn. That’s not bad; I’ll have to write it down.”

“My aunt is a poet,” Merry told Cedric.

Before Bess could prove her credentials by tossing out a line or two, her uncle Thaddeus—who was bluntly unsympathetic to rhymes of any kind—dragged Cedric off to the card room. Merry instantly pulled off her glove and revealed her diamond ring.

“Cedric is friends with the Prince of Wales,” she whispered.

Bess raised an eyebrow. “It’s always helpful to be acquainted with those in power, though I can’t say I view the man as a desirable acquaintance on his own merits.”

Merry’s aunt had grown up in that cradle of American high society known as Beacon Hill; her father was a Cabot and her mother a Saltonstall. Her staunch belief that she represented the pinnacle of society had remained unshaken in the presence of the most haughty noblemen.

“I am looking forward to meeting His Highness,” Merry said stoutly. She was marrying an Englishman, and that meant she had to adapt English ideas.

“The only prince I’ve met to this date is that Russian who courted your cousin Kate,” Bess said. “There’s nothing worse than a man who bows too much. He popped up and down like a jack-in-the-box; it gave me a headache just to look at him.”

“White gloves on a man have their time and place. But what with the gloves and the bowing, he was like a rabbit, one of those that flashes its tail before it runs off.”

Aunt Bess certainly had a lively gift for metaphor. 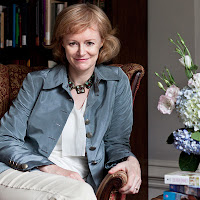 A New York Times bestselling author, Eloisa James is a professor of English literature who lives with her family in New York, but who can sometimes be found in Paris or Italy. (Her husband is an honest to goodness Italian knight!) Eloisa’s website offers short stories, extra chapters, and even a guide to shopping in Florence. Visit her at www.eloisajames.com.