Review: Something Real (More Than Something #1) by Abigail Grey 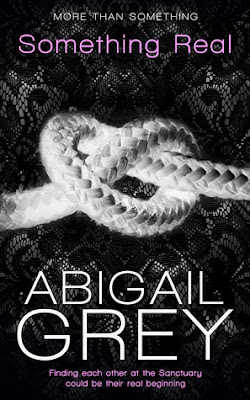 Marcy is hesitant to give her kink life a fresh start after an accident, but a triple-caramel cupcake may hold the answer.

Marcy Townsend is the new girl in town, according to the book club she’s joined. The friendships she has formed are growing, her new job is fulfilling and the new house is beginning to feel like home. Those new friends, though, don’t know what brought Marcy here. An accident that left Marcy injured—maybe permanently—has kept her from opening up to this new crowd. When the blind dates start, Marcy smiles and goes along, not expecting to be attracted to a man she meets on one.

Aaron Derrick lost his submissive to ambition. In the months since she left to find bigger things in her career, Aaron has fallen off the radar and kept to himself. But after he meets a mystery woman in a café, Aaron finds himself wondering if he could be missing out on something by avoiding the friendships he had before.

At the Sanctuary, a play space for the local kink community, Aaron and Marcy discover the wide web woven between them. Among friends, old and new, they try to discover if the two of them, despite their pasts, can develop something real.

Confession time... I love romance. Duh, right? One moment that I love in any type of romance is something that readers don't often see in romance books. Or at least it isn't something that I've seen in books that I've read. I'm talking about the moment when two characters realize that it has been each other all along. That "You!" moment where it all comes together in the end. That is what I adored the most with Abigail Grey's Something Real. The moment Marcy and Aaron meet, sparks fly. In fact, it seems as if Aaron's need for someone to watch after comes front and center in a sweet way. He notices Marcy longing for a sweet treat and the magnetic pull she's got on him pushes Aaron into action. However fleeting their first meeting was, it plays a big role in their thoughts and actions for the rest of the book. I found myself waiting on edge for that "You!" moment. Then as that moment neared I had a smile on my face because I knew it was going to be fun. And it was. The whole story was a mix of sweet and sultry. Their chemistry sizzled and jumped off the page. I wanted to lend a helping hand as Marcy struggled with the events in her past. She wanted to come out of the shell she hid away in after her accident and it was finally the right time to do so. After the end of the relationship with his ex-submissive, Aaron hid away from his friends until fate brought him to the cafe. It only takes one brief moment for him to be drawn towards Marcy. Together, they heel and bring closure for one another.

I really liked Something Real. It had a little bit of everything that I want in a romance. Obviously, there are elements of bondage, but it is also a super sweet romance between two characters overcoming their past to build on a future together. Fantastic story from a new to me author and I'm excited to see how this series continues.

Marcy Townsend smiled tightly, holding her cell phone to her ear. “I swear, Jen, if you’ve set me up with another of those guys you talked to at some event you were at…”

On the other end, she heard the exasperated sigh. “Marcy, you never come out with us. How else are you supposed to meet people?”

Taking a deep, reviving breath, Marcy reminded her friend, “Jen, I work with people. I work for people. I have our book club. I have volunteer work. I am not lacking for people.”

Marcy’s perpetually pursed lips made their appearance as she bit the inside of her lower lip. She really hated Jen Brannon sometimes. The woman was far too insightful for her own good. The leader of their women’s literature book club was a self-admitted caretaker, and it seemed to come naturally. Marcy could have hated her if the tone had been anything but soft and caring. Jen had the talent of hitting hard with the tough questions but the compassion to not push the issue.

Marcy turned, pacing the sidewalk in front of the coffee shop. “At least tell me he doesn’t have a computer screen tan.”

“I can’t promise that, Marce. You know how it is. Summer break doesn’t exist for grown-ups.” Jen chuckled. “He has better hair than the last one, though. I promise.”

Marcy groaned. “Oh, God, Jen. Could it have been worse?” At the silence on the end of the line, Marcy stopped dead. “You mean it could have been worse? You seriously considered worse?” Marcy shuddered at the thought of what would have trumped the permed mullet from Jen’s last matchmaking attempt.

“I didn’t say I considered it,” Jen hedged. “And Troy was a perfectly nice guy. Great hands.”

“He took me to get chili dogs, Jen. I wore a dress. And heels. He was so obviously not my type.” Marcy sighed, followed by silence on both ends. Marcy cringed, feeling Jen’s disappointment through the phone line.

“Jen, I need to go. He’s probably inside and I’m standing out here like an idiot. What was his name again?”

“Nathan. And you wore the cute blue dress, right? I told him you’d be wearing blue.” Jen sounded truly hopeful, so Marcy confirmed she was, only feeling a little guilty as she looked down at the modest blue blouse she wore with her pencil skirt and pumps. She said goodbye, taking a few more deep breaths as she hung up her cell phone, carefully placing it into the dedicated pocket of her attaché-sized purse.

Jen couldn’t help her optimism. Having found the man she would marry when she was in college, she wanted the same kind of love and enjoyment they still got from each other, almost twenty years later, for everyone…everywhere…that she had ever met. Whether she met them at events for her gallery or at the bi-weekly book club meetings or, like Marcy, in the checkout lane at their local grocery. Marcy knew, from her own experience, that the relationship Jen and her husband had was a one-in-a-million chance. After watching marriages from every side of her fall apart—from her best friends’ to her co-workers’ to her parents’—she had resigned herself to the theory that things like open communication, true love and complete monogamy were things of legend and myth.

She opened the door of the café, making her way to the counter to order. She schooled herself to look solely at the menu or the décor and not look curiously around for the man she was scheduled to meet.

The café seemed clean—something she was pleasantly surprised by. This area near the college in town was notorious for dark storefronts, kept that way to disguise the owners’ disdain for cleanliness. The clientele in those delis and bars seemed to echo their surroundings. The unwashed hair and torn jeans set was such a contrast to the crowd of professionals that were currently populating the tables around her.

Abigail lives in that small town in Western Michigan still, working and writing from home. She counts herself lucky to be named a leader in her local kink community and is often found at their own Sanctuary learning about rope, insertables, polyamory, and littles.  When not writing and reading, Abigail can be found at the local community theatre, fostering theatre geekhood in the younger generations.