Bone Secrets Sunday With A Message From Kendra Elliot 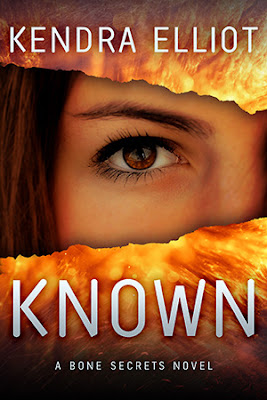 After a brutal snowstorm in the Cascade Mountains, Chris Jacobs discovers two things he never expected to see: the charred shell of a cabin, and Gianna Trask and her sixteen-year-old daughter huddled in an SUV, having barely escaped from their burning vacation rental.

Still scarred from a childhood ordeal, Chris knows there’s something sinister about the scene—it’s the stench of burned flesh.

Forced to wait out the blizzard in their rescuer’s retreat, medical examiner Gianna Trask wonders if her hidden past has finally caught up with her. When a body is found in the destroyed cabin’s ashes and a forest ranger is brutally murdered, both Gianna and Chris must confront their secrets if they want to escape the violent threat lurking outside.

In the fifth book in the Bone Secrets series, Kendra Elliot leads readers on a dangerous, twisting journey of two lives forever changed by a fiery snowstorm in the mountains.

A message from Kendra Elliot...

KNOWN is the hardest book I've ever written. I think it's because my fans had such a fantastic reaction to the first appearance of the hero, Chris Jacobs, in BURIED as a secondary character. I've never received so much email about a character. I put a lot of pressure on myself to create a story worth this honorable character.

Chris was abducted as a child and held in an underground bunker with his schoolmates by a sadistic serial killer. After two years, Chris and another boy escaped, but his friend died before reaching safety. Chris assumed his dead friend's identity, knowing his own family could be killed if they discovered he was alive.

In BURIED, Chris is reunited with his real family, but the novel belongs to his brother, Michael Brody. Readers clamored for Chris to have his HEA and I knew he needed his own novel, not a novella. I worked hard to come up with a love interest that was worthy of Chris.

Gianna Trask is a forensic pathologist with a teen daughter and a background that slightly echoes Chris's past. They have both been through hell and are drawn together by their shared pain. Everything Gianna believes about her past is turned on its side when a dead body shows up after her remote cabin catches fire. She and her daughter are trapped outside the cabin in a snowstorm until Chris appears.

During every word I wrote, I felt like I had my fans looking over my shoulder, wanting the best for Chris. It had a tendency to make me second guess every decision, drawing out the creative process. But I now feel like I did him justice. I hope my fans love Gianna as much as they adore Chris and agree that they are perfect for each other.

It had been at a full stop as he told Gianna that he remembered everything about his captivity with the Ghostman. He hadn’t shared his memories with anyone since Brian’s mother, Elena. His secrets had died with her. Early on, Michael and Jamie had asked a few leading questions, but he’d shut them down. He didn’t want their minds polluted with images from his past. They had imaginations; they could use them.

But with Gianna it was different. She’d moved toward him when he alluded to the horrors that had been done to him. She hadn’t run. She hadn’t rejected him. For one terrifying, heart-stopping moment he’d thought she’d look away; instead she’d reached out.

He’d grabbed her offering and clamped on like a man dying of thirst.

As he kissed her, he acknowledged that he’d been closed off for years. Gianna had gently touched his surface, sending small waves across his senses. The waves had rippled over the black memories that’d risen to the surface and calmed them, buried them. He hadn’t fought his usual internal struggle to make the images vanish; they’d simply dissolved.

He wasn’t a fool. They weren’t magically gone. But they’d never fallen away into the background with such ease.

Since he’d first seen her, Gianna had soothed his environment. Usually he escaped to his cabin to find that calm; yesterday he’d discovered it’d followed him back home on two legs. Two petite legs attached to one of the most gorgeous women he’d ever seen.

And she accepted him. She’d looked right into his nightmare and not shied away.

Her heart beat against his and he ran his hand up into her hair, cradling her skull. She felt so small under his fingertips. Her hand was still clutched in his, gripping like she was scared to let go, and he held their clasped hands against her back, feeling the soft give of her skin and the harder bumps of her spine. With her arm behind her she was open and vulnerable to him, but she didn’t seem to care. He tightened his hold on her, causing her to exhale, and she turned her lips from his, her breath brushing over his cheek. He moved his lips up her face to her cheekbones and her eyelids, to her forehead. A soft scent of coconut shampoo entered his senses, and he abruptly wished they were alone on a tropical island, not standing in her violated home in a rainy city.

He went back to her lips and her doorbell rang.

“We’re not done here.” He held her gaze, turning his statement into a question. Once again he placed the decision in her hands.

“Definitely not.” She pulled back; her eyes were dark, but her lips curved in a promising smile that made his heart painfully contract. In a good way.

Kendra Elliot won the 2015 and 2014 Daphne du Maurier awards for Romantic Suspense. She was also an International Thriller Writers finalist for Best Paperback Original and a Romantic Times finalist for Romantic Suspense. She grew up in the lush Pacific Northwest and still lives there with her husband, three daughters, two cats, and a Pomeranian. She’s always been fascinated with forensics, refuses to eat anything green, and loves a strong mai tai on the beach on Kauai. Visit Kendra at www.kendraelliot.com.

Click on the cover below for a chance to win a copy of Hidden, the first book in the Bones series!