Spotlight: All I Want for Christmas is a Duke by Valerie Bowman, Tiffany Clare, Vivienne Lorret, & Ashlyn Macnamara 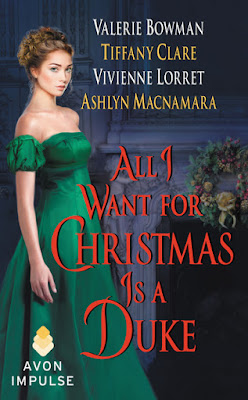 Four popular romance novelists come together to bring readers delightful tales of Christmas Magic and the dukes that make us swoon… The holidays are a time for dining, dancing, and of course—dukes! Celebrate the Christmas season with this enchanting collection of historical romances featuring the most eligible bachelors of the ton…

The Duke and Duchess Trap by Valerie Bowman
A childish prank may have reunited the Duke of Hollingsworth with his estranged wife, but only the magic of Christmas will show this couple ‘tis the season of second chances…

Sophie and the Duke by Tiffany Clare
Sophie Kinsley planned to remain a wallflower at the Duke of Helmsworth’s ball. Yet when a dance with him leads to a stolen kiss, will the duke be willing to let her go? Or will Sophie’s Christmas wish be granted at last?

The Duke’s Christmas Wish by Vivienne Lorret
To the Duke of Vale, science solves everything—even marriage. When the impulsive Ivy Sutherland makes him question all of his data, he realizes that he’s overlooked a vital component in his search for the perfect match: love.

One Magic Season by Ashlyn Macnamara
Patience Markham never forgot the fateful dance she had with the future Duke of Kingsbury. But when a twist of fate brings them together for Christmas Eve, will the stars finally align in their favor?

By the time he cleared his head, Miss Sutherland was taking a few hurried backward steps. When she turned around, she ran headlong into him with a surprisedOh! and then an oof!

North stumbled back into the ascending room. He did everything he could to remain upright. Planting his feet wide, he was forced to hold her against the sturdy column of his body. Forced to grasp her arms. Which, incidentally, were bare between her velvet-trimmed cap sleeves and elbow-length gloves. Bare beneath his hands. Bare, warm, and softer than goose down.

A shudder—that was more about untamed desire than preoccupation—quaked through him to his very core. Staring down into her almond-shaped eyes, he watched as they widened and swept over his features, from brow to chin. Her gaze lingered a fraction longer on his mouth, as if she was waiting for him to speak or, perhaps, waiting for him to kiss her.

He took a moment to speculate whether it was the former or the latter. In the seconds that passed, he catalogued how her hands were resting against his chest, not pressing as if she wanted to gain her freedom but curled slightly as if trying to capture the beat of his heart in the cup of her palms. Also, she made no movement to separate from him. Her breathing was rapid—though perhaps that was the result of running down the hall. When she wet her lips, however, she provided an irrefutable answer.

VALERIE BOWMAN grew up in Illinois with six sisters (she’s number seven) and a huge supply of historical romance novels. After a cold and snowy stint earning a degree in English with a minor in history at Smith College, she moved to Florida the first chance she got. Valerie now lives in Jacksonville with her family including her rascally dog, Roo. When she’s not writing, she keeps busy reading, traveling, or vacillating between watching crazy reality TV and PBS.

USA Today bestselling author VIVIENNE LORRET loves romance novels, her pink laptop, her husband, and her two sons (not necessarily in that order ... but there are days). Transforming copious amounts of tea into words, she is proud to be an Avon Impulse author of works including: Tempting Mr. Weatherstone, The Wallflower Wedding Series, and the Rakes of Fallow Hall series.

Deciding that life had far more to offer than a nine to five job, bickering children and housework of any kind (unless she’s on a deadline when everything is magically spotless), TIFFANY CLARE opened up her laptop to write stories she could get lost in. Tiffany writes sexy historical romances set in the Victorian era. She lives in Toronto with her husband, two kids and two dogs.

USA Today bestselling author ASHLYN MACNAMARA writes Regency romance with a dash of wit and a hint of wicked. She considers writing her mid-life crisis but reckons it’s safer than hang-gliding or rock-climbing. She lives in the wilds of suburbia outside Montreal with her husband, two teenage daughters, and one loudmouth cat. Although she writes about the past, you can find her in such newfangled places as her website Facebook, and Twitter.