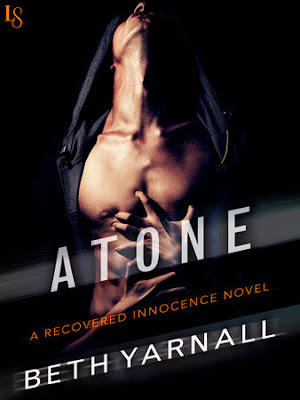 Beth Yarnall’s sexy and emotional Recovered Innocence series continues as two broken souls discover that keeping their hands off each other is even harder than facing their demons.

Beau: Six years. That’s how long I spent behind bars for a crime I didn’t commit—the murder of the woman I loved. Now I’m free, but life on the outside is a different kind of prison. I don’t know who I am or who I want to be. At least I have my sister, Cora. She never stopped believing in me. She even got me a job at the private investigation agency that cleared my name. And then Vera Swain walks into Nash Security and Investigations and kicks my world on its ass.

Vera: There’s only one thing that would make me come out of hiding after two years on the run: finding my sister. I made the mistake of telling a monster about her, the same monster who beat me and broke me. Now I’m forced to confide in Beau Hollis of Nash Security and Investigations. He looks at me like he knows me—the real me. He sees too much, makes me feel too much. The pleasure he offers is exciting and addictive. But I can’t fall for him . . . because my love could get us both killed.

I don’t have much of value. I’ve left so many things behind that objects no longer have any meaning for me. I could walk out of this pay-by-the-week motel with nothing but the clothes on my back and I’d find a way to survive. It’s a skill that served me well as I got tossed from group home to foster home and back again, and then when I was finally spit out into the world with literally nothing. I left everything when I escaped . . . including my name. You don’t know what your limits are until they’re pushed past breaking. My boundaries have been stitched and restitched back together too many times. I no longer have a sense of what it’s like to be able to set my own parameters.

I’m working on that, but it’s slow going and meticulous. Mostly I stay isolated. Interactions with other people are kept to the bare minimum, unavoidable social necessities. I avoid eye contact and speak only when forced to. I don’t like what I see. You can tell a lot about a person by what lurks in the depths of their eyes. Every ugly thing they think and feel hides there. They smile, but it doesn’t pretty up the person they are inside. What’s that saying? Like putting lipstick on a pig. That’s what smiles are for me. People will smile at you while they hurt you. I no longer trust them.

Everybody has an agenda. I learned this from my mother, whose only plan was letting anyone who would pay her shove their dick in her so she could put a needle in her arm. I learned it from the foster families who accumulated children like part-time jobs, cashing in the checks they got for taking us in, then barely feeding us. And I learned it from the police who failed to protect, and the only serving they did was to their own self-interests.

I don’t know how long I can stay in San Diego. The need to keep moving rides me hard. I’m too close to where everything started and where it ended. Marie is the reason I’m here and the only reason I’ll stay for any length of time. I have to find her. Javier knows about her. I was too stupid not to mention her when I first met him. He’ll remember and he’ll use her to get to me, to get back at me. I can only fight him so far. I will never win against him. But I can try to outsmart him by staying ahead of him and finding Marie first.

Someone bangs on the door and I jump. No one knows I’m here. At least they shouldn’t know. I’ve been careful. But obviously not careful enough. I pull out my gun. It’s always on hand. I don’t have to check it to know it’s ready if I need it. At the door, I stand off-center and look through the peephole to see who’s there. My heart explodes in my chest and I sag in the corner between the door and the wall, breaking out into a sweat.

What the hell is he doing here?

He strikes the door again. “Vera!”

What does he want?

I can’t make myself unhook the latch or answer back.

“I’ll keep your secret, but I at least need to know why I’m keeping it.”

I try to work up some spit so I can speak. How did he find me?

“The cameras in front of the agency picked up your Colorado license plate,” he says, answering my unasked question. “It wasn’t easy finding you.” His voice gets quiet, as if his face is pressed to the door. “I want to help you. Let me help you.”

I swipe the sweat off my upper lip. The gun is heavy and reassuring in my shaky hand.

My feet barely support me as I come off the wall. I don’t know why I’m doing it, but I slide the lock back and open the door, staying behind it for whatever imaginary protection it can give me. Beau sidesteps through the door and into the room. He’s larger than I remember, crowding his big body into the small room. With the flat of his giant hand he closes the door. I hesitate for a moment before choosing the greater of two fears and slide the lock back into place.

His gaze goes to my gun. He shoves his hands into the front pockets of his jeans and acknowledges it with a jerk of his head. Other than that, he doesn’t do anything. He doesn’t say anything. We stare at each other, sizing each other up. I hope I haven’t made a mistake letting him in. A thousand questions sit on my tongue, but I don’t ask them. He said he was here to help. I need help. I don’t want to need it. But there it is. I don’t want to trust him, yet somehow I do. I think I should be afraid, but there’s nothing about him that drives me to run.

“Why are you here?” I finally ask.

“Is she really your sister?”

“You’re afraid for her.”

“You’re not going to tell me why.”

He doesn’t ask the question I would ask: Who are you? Because there’s no doubt he knows I’m not who I say I am. He could’ve called the burner number I put down on the agency’s form. Instead, he tracked me down. Was it only to show that he could do it, or is there another reason? Maybe he’s trying to prove to me that I can trust him with this gesture. He could’ve handled it so many different ways, but he chose to maintain my need for anonymity.

Beth Yarnall writes romantic suspense, mysteries, and the occasional hilarious Tweet. She discovered romance novels in middle school and hasn’t stopped writing since. For a number of years, she made her living as a hairstylist and makeup artist and co-owned a salon. Somehow hairstylists and salons always seem to find a way into her stories. Yarnall lives with her husband, two sons, and their rescue dog in Orange County, California, where she’s hard at work on her next novel.

Don't Miss the first title in the Recovered Innocence Series
now on Sale for $0.99