Review: Beyond the Stars by Stacy Wise 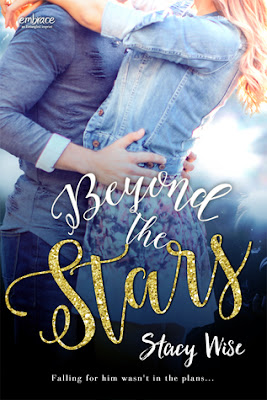 "Dreamy? No, I think he's pretty much all asshole." - Jessica Beckett

Falling for him wasn’t in the plans…

Most girls would kill for the opportunity to work for Jack McAlister, Hollywood’s hottest actor, but twenty-one-year-old Jessica Beckett is ready to kick him out of her red Ford Fiesta and never look back. She should be spending her junior year in France, eating pastries and sharpening her foreign language skills. Instead she’s reluctantly working as Jack’s personal assistant, thanks to her powerhouse talent agent aunt.

Jack is private, prickly, and downright condescending. Jessica pushes his buttons—she’s not the type of girl to swoon over celebrity heartthrobs, precisely why her aunt thought she’d be perfect for the job—and Jack pushes right back.

But as she begins to peel away his layers, Jessica is shocked to find she craves her boss’s easy smile and sexy blue eyes. The problem is, so does the entire female population. And what started out as the job from hell soon has Jess wondering if a guy like Jack could ever find love with a regular girl like her.

As a fan of new adult romance, there are certain things I kind of expect when I'm picking up a new book. Most new adults I've come across tend to run high on emotions, sex, and angst. And now as I am starting to want to read more Hollywood/celebrity themed romances, I typically find the same elements. I think that is one of the main reasons why I loved Beyond the Stars. Stacy Wise almost goes against what is expected and gives readers a fun, clean new adult celebrity romance that still delivers an emotional romance without the sex. The chemistry and tension between Jack and Jess was superb. I loved Jack's transformation from the jerk he was at the beginning of the story to the man in love at the end. Although she's derailed from her summer plans, Jess doesn't let it stop her. She's determined to keep her head up as she struggles to get through the summer. Their romance was so sweet and tender. I think I "aww'd" several times in the last couple of chapters.

As much as I adored Beyond the Stars, I will say that there was one thing missing. I needed Jack's perspective. There were moments that screamed Jack. Looks that he gives Jess... Some of his actions towards her and his friend... Because we only get Jess's perspective, I felt that these moments lost a lot of impact and I think they could easily get lost in translation. Overall, I loved Beyond the Stars. Kudos to the author on an excellent debut novel.

“Jack, this is Jessica Beckett. Jessica, this is Jack McAlister.”

I plastered a blasé look on my face, allowing a hint of a smile. And I reminded myself that actors are egotistical, self-centered liars. “Hi, Jack. Nice to meet you.”

We shook hands, and Aunt Marnie explained that her big surprise was me, his new assistant.

He dropped my hand and crossed his arms, his hands tucked into his armpits. “We’ve been through this, Marnie. I don’t want an assistant.”

His words felt like a punch in the gut. She should’ve clued me in that he didn’t want an assistant. That would’ve been, I don’t know…helpful?

“You need one, Jack. Stars like you sometimes have two or three assistants. It’s time you recognize who you are.” She let her words hang in the air, and Jack listened like a child learning there’s no Santa Claus. For a second, I had the urge to comfort him.

He flashed a hurt look. “That’s not going to work for me.”

Aunt Marnie smirked. “It will work. The solution is keeping it in the family. Jessica is my niece.”

“Doesn’t matter. I can handle my own life. I don’t need anyone else involved to fuck it up.”

“Because you’re doing a fine job of it on your own.” She smiled at him, looking more maternal than I’d ever seen her. “I’m not going to lecture you. I understand how the pressures can get to you. Compartmentalize, remember?”

She paused, and I stole a glance at Jack. I could tell by the look on his face that he was considering what she said.

“How is an assistant going to stop me from punching a photographer in the face, Marnie?”

My mind flashed with images of late nights and liquor-fueled, testosterone-saturated brawls, and I wanted to run, but Marnie went in for the hard sell. “She can have exit routes in place for you so you’re one step ahead of the paparazzi. You can’t stop being out there. You have to play the game. It’s the perfect time to do this. Rehearsals for Steven Lowi’s film don’t start for another few weeks. It’s rare that you have this downtime. Use it to figure out how Jessica can best help you.”

There was an undertone of desperation in her voice. Jack probably didn’t notice, but I did. As Aunt Marnie continued to push, the reality of what she needed hit me. If she lost Jack as a client, it would mean a dramatic lifestyle change for her. They made each other millions. He could easily land another agent, but his leaving her would lead to hushed, speculative conversations. Was she slipping? Too old? Out of touch? He was her meal ticket and her bait to get new clients. I had to help.

I stole a glance at Jack and wondered if I could work for a guy who punches people in the face. Nerves circled like sharks in my stomach. Nonetheless, at the end of the meeting, I was Jack McAlister’s assistant. Aunt Marnie beamed at me before turning to Jack and hugging him. I knew he was her best client, but I got the feeling he was also her favorite.

It’s hard to believe that was only yesterday. I had no idea I’d be working as a pig chauffeur today. Very glamorous.

Stacy Wise is the author of Beyond the Stars. She has a B.A. in Communication Studies from UCLA and a Masters in Teaching from Chapman University. She lives in California with her husband and four children. Prior to becoming a full-time writer, Stacy worked in television casting on shows including Party of Five, The X Files, Sabrina, the Teenage Witch, and Married...With Children. When she's not dreaming up stories, you can find her beating up the bag at her kickboxing gym, or walking her dogs, Bailey and Rex.