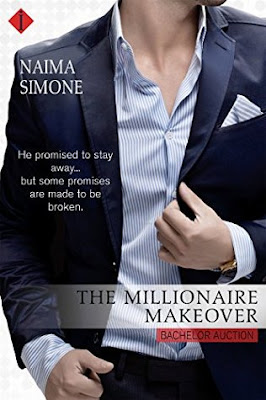 "Taking you to your gala. But not in that dress. Where did you get it? Nunneries 'R' Us?" - Niall Hunter

He promised to stay away…but some promises are made to be broken.

Plain-Jane computer programmer Khloe Richardson needs a date—one to make the prince of her dreams jealous. Maybe then he’ll finally see her as a desirable swan and not the ugly duckling in the second office from the left.

But when she bids on a bachelor at a charity auction, the man she wins is millionaire Niall Hunter—who once made intense, passionate love to her and then left without a word. She’s determined not to let her guard down again—among other things—around the infamous Irish lothario.

Niall never imagined his penance for one hot-as-hell night with his best friend’s little sister would be transforming her from a shy wallflower to a sultry siren. Helping her attract another man is torture…especially when he promised his friend he’d stay away. Plus, she wants forever, and he’s not a forever kind of guy. But Niall can’t stop wanting her. Can’t stop touching her. Can’t stop, period. And damn if he can remember why he has to…

I had a bit of a weird experience while I was reading The Millionaire Makeover. When I was first approved for the arc, I immediately wanted to get a feel for the author's voice and writing style so I picked it up to read the first couple of chapters. Although I enjoyed the first two chapters, I had other books to read at that time and I set it aside. When time came for me to pick it back up, I could only read two or three chapters at a time, which was odd because I really liked the book. I adored the characters of Niall, Khloe, and even Morgan. They were fabulous. Niall and Khloe shattered my heart. To say they desperately needed each other would be an understatement. Niall needed someone to believe in him. Someone that'll cheer him on and help him live. Khloe needed someone to bring her out of her shell, yet show her that she is truly beautiful, both inside and out. I loved the little bit of matchmaking from the beyond. With the help of someone close to them, Niall and Khloe begin an intense sexual relationship that left them both breathless and wanting more.

Despite me having a difficult time reading the book, I thoroughly enjoyed The Millionaire Makeover. Honestly, I'd like to believe it was Michael that was tormenting while I was reading the book. I clearly made him unhappy when I stopped reading it earlier. *grin* It was an emotional, yet very sexy book. Niall is sex personified. Holy hotness! Naima Simone is another new to me author. Her writing was fun and smooth to read. I'd love to pick up one or two of her previous books in the future. In the meantime, I have my fingers crossed for Morgan. I need to know more about her!

“Remind me again why I agreed to this asinine idea?”

Khloe Richardson paused in the entrance of the cavernous ballroom that glittered from the crystal chandelier to the bejeweled guests. She clutched her purse to her stomach as if the ridiculously small and sparkling bag could calm the nerves playing kickball with her intestines. God, she felt like such a fraud. She belonged in a small, messy office filled with computers, modems, and technical manuals. Not in this brilliantly lit room where the formally attired men and women of Boston’s social elite congregated and socialized.

Beside her, Morgan Lett—her best friend, co-worker, and enabler—plucked a fluted glass off a passing tray. She sipped with an appreciative hum. “Oh my God, this is better than sex,” she purred. Then, arching a perfectly waxed, blonde eyebrow, she said, “And the answer to your question is we’re here so you can avoid spinsterhood like it’s a cubic zirconia.”

Actually, there were some pretty nice fake diamonds out there, but since Morgan probably wouldn’t appreciate the observation, Khloe instead murmured, “Oh yeah, that’s right.”

This scheme of Morgan’s to find Khloe a date at a bachelor auction, of all places, reeked of impulsiveness, lunacy, and a whole lot of Hail Mary. The exact antithesis of Khloe’s usual predictability, sanity, and OCD-ish need to plan, chart, and graph. But love did that to a person. It stripped away common sense, persuaded a woman who reveled in algorithms and code to buy a formal gown, death-defying heels, and take part in this…spectacle. More specifically, love for Bennett Charles—brilliant, successful, handsome, sophisticated, and chief operating officer of System Solutions Unlimited, the firm she and Morgan worked for.

An image of the company’s executive unfurled in her mind’s eyes. She’d been adoring him from afar for the past six months. But other than the occasional conversation before a staff meeting or a friendly but slightly vacant smile, Bennett didn’t seem to notice she existed. And if not for a terrifying car accident a month ago that she’d miraculously managed to walk away from with little more than scrapes and bruises, she might have been content with moseying along, quietly crushing on him. Her older brother, Michael, had died in a car accident three years earlier. Her brush with death and knowledge that tomorrow wasn’t guaranteed had jolted her awake from a catatonic, emotional slumber. Not one more second would she sit on the proverbial shelf, a spectator in life and gathering enough dust to create a sandstorm.

Trouble was, she didn’t have a great résumé where men were concerned.

One had stolen a project idea from her, received a promotion as a result of her hard work then took off for a new European office, breaking up with her via a PM on Facebook.

The other? Well, the other had stolen her virginity and broken her heart…

Naima Simone's love of romance was first stirred by Johanna Lindsey and Linda Howard many years ago. Though her first attempt at writing a romance novel at age 11 never saw the light of day, her love of romance and writing has endured. Now, she spends her time creating stories of unique men and women who experience the dizzying heights of passion and the tender heat of love.

She is wife to Superman - or his non-Kryptonian, less bullet proof equivalent - and mother to the most awesome kids ever. They all live in perfect, domestically-challenged bliss in the southern United States.