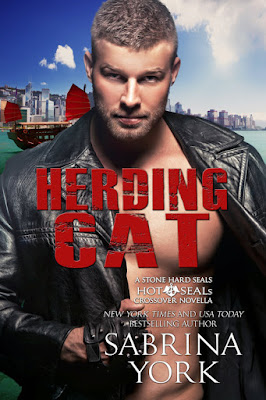 It’s insane to want him, this beautiful, strong, sexy man. Not just because her hot bodyguard is tasked with herding her safely through the exotic night markets of Hong Kong. And not just because she’s his boss. But because they are worlds apart. What they have can only be a fling. It can’t last forever.
But Garrett has other ideas.

Sabrina York is one of the handful of authors I've come across that has the ability to write a steamy romance is nearly every genre. Although I admit that I'm partial to Sabrina's erotic romance, it is her dip into grittier, slightly more romantic suspense, that I'm really looking forward to. In Sabrina's newest novella, Herding Cat, readers are treated to a sexy story with hints of suspense. While Herding Cat was a short novella, I was still able to connect with her characters. They were well developed and likable. Sabrina's writing is smooth and the fast pace of the novella was perfect. Another fantastic addition to her Stone Hard SEALS series.

She emerged just before the knock came on the door, announcing their dinner had arrived.

Did she have any idea how sexy that was?

He wanted nothing more right now than to yank her into his arms and kiss her.

But he couldn’t. Shouldn’t.

She looked up. Caught him staring at her. Instead of a glower—as he expected, being caught out like this—her eyes widened like a gazelle on an African plain sighting a predator.

Especially when that wanting look flickered through her eyes.

Oh, she tried to hide it, but he saw it. Couldn’t miss it. It sent a flame licking through his body. He was damn tired of pretending. Tired of looking away. Tired of acting like the simmering arousal he felt for her didn’t exist. Tired of keeping himself constrained.

As he continued to watch her, she became restless. And then she frowned. “Stop that,” she said.

He did. He wanted to eat her all up. And he wanted her to know it.

He couldn’t stop his roguish grin. “Scott was right.”

Her throat worked. “I…ah… Do you want to make a move?”

A pink tide crept up her cheeks. “Don’t be ridiculous.”

“It’s not ridiculous in the least.”

“Why are you telling me this?”

“Because you should know.”

“Know? Know what?” Her innocence was feigned. It had to be. She was a grown woman. A knockout. Surely she knew what effect she had on the males of the species.

“You should know how much I want to kiss you right now.”

Her eyes shone. Her lips parted. Her tongue peeped out.

That was an engraved invitation if he’d ever seen one. Without a word, he pushed back his chair and rose. And then he rounded the table, took hold of her wrist and yanked her into his arms.

For more information, or to connect with Sabrina, visit SabrinaYork.Com.

Never Miss a New Book! Sign up for Sabrina’s Book Alerts Today!
Get exclusive reads, enter subscriber only contests and be the first to know about coming books!

a Rafflecopter giveaway
Posted by CrystalBee at 8:34 PM