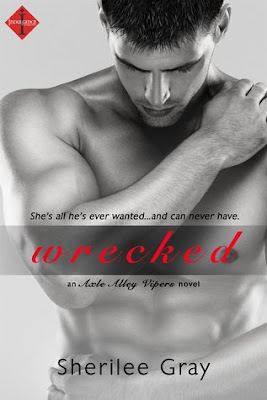 "What have you done to me, sweet girl?" - Cole Black

Piper West is finally on her own, and it’s time to get crazy. Except that her overprotective big bro has enlisted his ex-cop best friend to keep an eye on his baby sister. With every move monitored and reported back, Piper’s life has gone from “going crazy” to “being driven crazy.” But a searing-hot kiss with her sexy and scarred watchdog is just the game-changer she needs…

Cole Black owes Piper’s brother big-time, but there’s nothing easy about his new assignment. Piper is all feisty sexiness and curves meant to tempt a man beyond reason, and Cole can’t stop himself. Now he’s caught up in a hunger like nothing he’s ever known, and he can’t get enough…

Even if Piper’s the one girl he’s not allowed to have.

Oh, my god. Oh. My. God. Words cannot express how much I flipping loved...LOVED...Wrecked. How have I not read one of Sherilee Gray's books before this?! Of course, I devoured it in record time. The only reason why I did not finish it in one sitting was because it was 3 o'clock in the morning and I was starting to see double. What did I do the next morning? I finished it the moment I woke up and turned into a book zombie for the rest of the day. I adored everything about this book, from the characters to the sizzling sexiness to the author's writing. Piper was fabulous. She's feisty and tenacious. She'll go above and beyond to prove herself to her family. Her determination to succeed is just one of her qualities that attracts Cole. Holy hotness, where can I clone Cole?! The man is sinfully delicious. Just one look from him... Swoon city! The sexual tension between them was scorching hot. There was one scene that I swear I re-read at least 5 times before moving on to the next chapter. Holy crap, if I could have pushed Piper out of the way I would have. Sherilee's writing was phenomenal. I loved the chemistry between Piper and Cole as well as the relationship with the rest of the characters. I need to read the previous books in the Axle Alley Viper series and, if they are as good as Wrecked, I think I may have found a new "must read" author.

“Hang on! I forgot my flowers,” Piper called from somewhere behind the bride.

Shit, just the sound of her voice sent ripples of pleasure through his bloodstream. Alex stood in the doorway, so he couldn’t get a good look at the object of his obsession past all the poufy layers of wedding gown.

Rusty fussed and arranged her friend’s dress, helping Alex step onto the porch, and then Cole took the bride-to-be’s arm, leading her down the steps since she could barely see her feet, and escorted her to the car. He went back to lock up—just in time to see Piper moving cautiously down the short hall toward him.

He froze, breath seizing in his lungs. Couldn’t have moved if the fucking porch started giving way under his feet.

Piper stopped a few feet away and ran her hands over the silky fabric of her dress, straightening it over her waist and hips. He sucked in an unsteady breath. The thing clung like a second skin, molded to her extremely curvaceous figure. Yeah, he was far from blind where Piper West was concerned. The woman had serious curves. The kind of curves that could bring a man to his knees. In fact, he’d studied the woman from head to toe so thoroughly, if there was an exam on Piper’s curves alone, he’d ace it.

But he’d never seen her like this. He was used to seeing her in jeans and tanks, grease on her skin from a day in the garage, hair pulled off her lovely face. Shit, she looked hot enough in her work clothes, but this? The mouthwatering dress she had on hid nothing. Not. A. Fucking. Thing. And goddammit, it had his cock rising to attention, painfully so. It should be impossible with the anxiety still battering him, but then this was Piper, and if anyone had the ability to turn him inside out it was her.

Jesus, she looked like one of those sexy fifties actresses, all round and soft with a tiny waist that was only emphasized further by the flare of her hips and spectacular tits.

She grimaced, frowning in a way that was cute as hell, and tugged at the dress a few more times before she carried on in his direction. He tried to move his mouth, to offer up a compliment, to say something, but instead made a croaking sound.

Her gaze shot up, colliding with his, only now realizing she had an audience. Her cheeks turned pink—then her eyes narrowed and she scowled at him. “Cole.” Then she continued on out the door.

Piper was sweet to everyone she met, saw the good in people, liked everyone—but that list no longer included him. She scowled and bitched at him, because he’d done his damnedest to make sure she hated his guts. It was the only way he knew how to keep her at arm’s length. And it had worked. Phenomenally well.

The object of his desire despised him.

She was the only person who had never treated him any different after what happened. Not once had he seen pity in her stunning blue eyes. He’d seen compassion, yes, regret, but never pity. How would she look at him if she knew Adam had lost his life because of him?

He couldn’t bear it if she felt sorry for him. That was the last thing he wanted, especially from her.

He pulled the door shut and turned to follow her. Fucking hell, the rear view did nothing to help the painful throb of his cock. He was pretty sure she wasn’t wearing any underwear. The silky material hid nothing, and not one line marred the shimmery fabric hugging her heart-shaped ass. Those round hips swung provocatively as she made careful progress in a pair of mouthwateringly sexy heels down the uneven path toward the car. He groaned under his breath. Jesus Christ.

The woman was killing him, slowly. Besides occasional morning wood, nothing had roused any kind of interest below the belt since he’d been injured. Except Piper.

The one woman he couldn’t allow himself to have, and the only woman he wanted.

Sherilee Gray is a kiwi girl and lives in beautiful New Zealand with her husband and their two children. When she isn't writing sexy, edgy contemporary romance or fueling her voracious book addiction, she can be found dreaming of far off places with a mug of tea in one hand and a bar of Cadburys Rocky Road chocolate in the other.