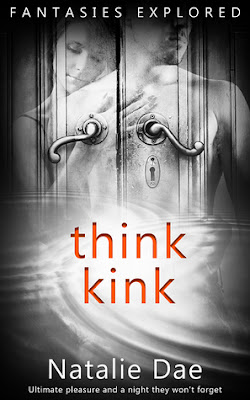 Anna, Kline, and Jack. Three people who all have the same thing in mind - ultimate pleasure and a night they won't forget.

Kline has made Anna wait for her deepest desire, and tonight she will get the second lover she asked for a year ago. Kline will do anything to make Anna happy, including allowing the stranger inside her body, but he isn't prepared for how sharing her will make him feel.

Jack is hired to join Anna and Kline for an hour of rampant sex and is hit with confusing emotions once he sees the beautiful woman spread-eagled on the bed, duct tape holding her wrists and ankles to the posts. Something about her changes his perspective with regards to his job, and he finds he wants more than just a sample of the woman who has gotten under his skin.

When I needed something quick and sexy, Natalie Dae's Think Kink hit the mark. For a quick little novella, it still pulled a couple surprises. I loved that readers aren't limited to just Anna and Kline's perspectives. I was pleasantly surprised that it was also in Jack's perspective. You really get an idea of what is going through each of the character's minds during the pivotal scenes. It left me satisfied and wanting to read the second novella in the series the moment I finished it.

How long will he leave me here this time?

The bite of the clamps on Anna’s nipples had eased since Kline had placed them there, the long, thin chain joining them having long since warmed on her belly. When he had dropped the chain, she had jolted at the cold shock of it, her wrists pulling at the duct tape binds that held her to the bedposts. She had requested duct tape this time, wanting a more dangerous feel to their monthly hotel trysts.

The handcuffs weren’t doing it for her anymore.

I need to push it to new levels.

Kline had called her greedy, and she was. Greedy for whatever he gave her, however he chose to give it. Tonight, she lay spread-eagled on the bed, her ankles taped to the bottom posts, and a ball gag filled her mouth. Blindfolded, she waited in the blackness, listening for any sound that indicated he would come to her soon.

When she had packed their case—full of the toys they used and various outfits to suit whatever mood Kline was in—her stomach had bunched with excitement. These nights at the hotel gave them a chance to relax, break free and be as loud as they liked. Living in an apartment in New York City was difficult sometimes. Neighbours banged on the walls if she screamed too loudly, and Anna was sure they thought Kline beat her, that she didn’t like the delicious things he did to her.

How wrong can they be? I love it. Every damn minute of it.

She sighed and took a moment to assess how her body was responding. Her heart beat wildly and her pulse flickered hard in her throat. Breathing through her nose, long, steady inhalations and lazy exhalations, she felt she had herself under control. For now. It wouldn’t be long—or would it?—before Kline came in and sent her to the place she craved, to the edge of her comfort zone, whispering their special words in her ear.

Think kink, Anna. Tell me, what do you want me to do?

She lives with her husband and youngest daughter in England and spends her spare time reading—always reading!—and her phone, complete with Kindle app, is never far away. “I can't imagine not reading or writing,” she says. “It's a part of who I am. Without it I'd be more than a bit lost.”

She writes at weekends and is a cover artist/head of art in her day job. In another life she was an editor. Her other pen names are Geraldine O’Hara and Sarah Masters. Natalie also co-authors as Sarah Masters with Jaime Samms, and she co-authors with Lily Harlem under the name Harlem Dae.

Check out Natalie's other works HERE.