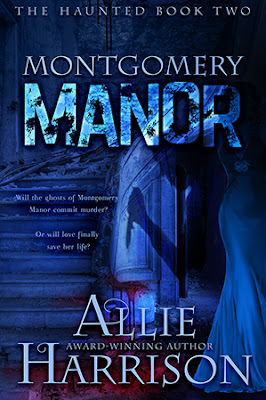 Welcome to Montgomery Manor, a beautiful Bed & Breakfast complete with gorgeous guest rooms, a five-star restaurant, and a haunting history of true love, betrayal, and murder...

When soulmates Quint and Meg Falkner inherit moldering Montgomery Manor, they are in way over their heads. With a bit of faith and strange push they cannot ignore, they jump head first into bringing the large, compelling house back to its original grandeur.

But something is different...something is...wrong. Quint isn't acting himself, and Meg keeps seeing visions, images of the past seeping into her very soul. When Meg becomes the target of a mysterious, dangerous admirer, her world implodes, leaving her vulnerable to the otherworldly inhabitants of the house...the very house calling out to her, its secrets begging to be uncovered.

Endless corridors, echoing darkness, and hidden treasure weave together in this tale of everlasting love and second chances.

Meg was tired, her feet ached. Her jaws hurt from the constant smile she kept on her face for all of Quint’s party guests. She needed to catch her breath. Maybe she’d just take her own little tour and get away from the crowd for a while.

She gave one last quick glance about the large room but didn’t see Quint anywhere, otherwise she would have told him she needed to find a quiet place to get some air. Instead she wandered away from the party. It wasn’t difficult. Other partiers were either caught up in their own conversations or busy studying the house and the décor. She found a small stairway, and ascended. After walking a long, dark, dusty hallway filled with tools and ladders, Meg realized she was in the part of the house Quint continued calling the North Wing. It was the part of the house he hadn’t refurbished or remodeled yet. It was quiet and dark and a bit colder than the rooms she just left, suffering from years without heat or cleaning or maintenance. She welcomed the cooler air.

Though echoes of the party drifted up to her through the darkness, for the moment, this place was what Meg needed. Quiet from the storm of the party downstairs, and the emotions pinging through her. She made her way to the windows at the end of the long hallway, and slipped off her shoes, allowing the bare floor to soothe her aching feet.

The view from the window captured her gaze. Through the steady rain and lightning of the storm, she saw the neglected gardens filled with weeds and trees and shadows. She heard the surf crashing against the nearby rocks and knew, without a doubt, that on a clear day, this window would offer a magnificent view. For now, she could only see the part of the parking lot lit by the streetlight.

She took a deep breath and inhaled the heavy scent of must and the lumber stacked nearby.

She closed her eyes and pressed her head against the chilly glass.

A slight frigid breeze flowed through the hall. Had someone opened a door? She didn’t open her eyes. The chance to rest against the chill of the glass was simply too good. What did she care if someone else snuck up here for a moment alone?

She sighed. So Quint had followed her to steal a moment alone. Wonderful…

She waited a few heartbeats, but the soft touches didn’t continue. Meg opened her eyes and looked over her shoulder.

She was alone in that dark, cold, musty hall. 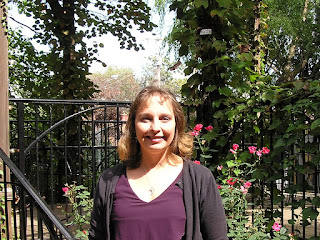 Allie Harrison lives with her husband in Southern Illinois. By day, Allie works in the medical field, but when she clocks out, she hits the keyboard, crafting stories readers will love. When she isn’t enjoying fun family time, games with friends, reading, crafts, music, camping, biking, and hiking, she’s working to build fictional worlds and unforgettable characters. 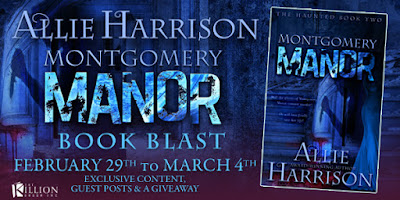