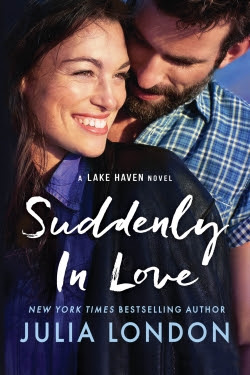 "I like you too, Mia Lassiter. More than I want to." - Brennan Yates

Mia Lassiter is thrilled to finally put her artistic skills to use working for her aunt’s interior design shop in her hometown of East Beach. While renovating an old mansion overlooking stunning Lake Haven, she encounters a scruffy but attractive man named Brennan—the owner’s son. She doesn’t realize this sexy recluse is actually Everett Alden, the world-famous rock star in hiding who’s nursing his own artistic and personal crises.

As their personalities clash, tension simmers between the struggling artist and jaded musician, and their time spent alone together in the gorgeous old house only serves to turn up the heat. Soon, Mia and Brennan’s creative passions boil over to inspire passions of another kind…

But reality comes crashing in when Mia’s celeb-obsessed cousin discovers Brennan’s true identity—and reveals it to the world. As paparazzi swarm the mansion, Brennan is thrust back into his rock star lifestyle. Will Mia lose her soul mate just when she’s finally found him? Can their love survive the glaring spotlight?

Brennan and Mia are lost, both personally and professionally. After the death of his best friend, Brennan is forced to step back from the limelight to find himself. Unhappy and exhausted from the constant touring, he decides to hide out in small town East Beach. Recently laid off, Mia's only recourse is to return home to East Beach and work for her aunt. Her dreams of becoming a famous artist seem to be fading fast and she's stuck trying to figure out what to do next. While it may seem as if they are from two different universes, Brennan and Mia are actually quite similar. They understand each other and are able help one another find a new focus in their respective careers. Mia lit Brennan's path from the land of the lost and Brennan helped re-ignite Mia's passion for art. I adored Suddenly In Love. The budding romance between Mia and Brennan was amazing. I loved that after everything the went through in the book, they were still able to find a common ground strong enough to build the foundation for their relationship. Both know that it won't be easy, but they are going to work and fight for what they have. My first Julia London book and I gotta say, I'm kind of hooked. The writing was fantastic. The characters were different and fun to discover. I've been wanting to try one of Julia's books and I'm glad I did.

Born in Canyon, Texas, and raised on a ranch, Julia London didn’t have her eye on writing romance right away. After graduating with a degree in political science from the University of Texas in Austin, she moved out to Washington, DC, eventually working in the White House. She later decided to take a break from government work and start writing. Today, she is the New York Times, Publishers Weekly, and USA Today bestselling author of more than thirty novels. She writes historical romance and contemporary women’s fiction, and her most popular series include the Secrets of Hadley Green series, the Cabot Sisters series, the Desperate Debutantes series, the Lear Sisters series, and the Pine River series. She is a recipient of the RT Book Reviews Best Regency Historical Romance award for The Dangerous Gentleman, and a six-time finalist for the renowned RITA Award for excellence in romantic fiction. She resides in Austin, Texas.