Spotlight: The Debutante Is Mine (Season's Original #1) by Vivienne Lorret 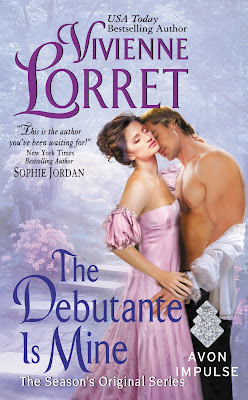 From the Season Standard: ”A true Season’s Original embodies the class, grace, and style of the ton. Such an honor ensures the recipient their pick of eligible suitors…“

Lilah’s Appleton’s prospects are looking dim. With one last chance to find a titled husband before she’s forced to wed her wretched cousin, she must make this Season count. Plain, forgettable Lilah must become the Season’s Original. Desperate, she seeks help from the devilishly charming, untitled, and thoroughly unsuitable Jack Marlowe. All she must do now is resist the tempting rogue…

Bastard son and self-made man, Jack Marlowe loathes the aristocracy. When he meets Lilah, he expects her to be like all the other greedy husband-hunters. But she’s far more dangerous. Her alluring smiles and sharp tongue intrigue him. Before he knows it, he agrees to help her find a husband, revealing tricks to ensnare any man. The only problem is, his plan works too well—on him.

When Lilah becomes the belle of the ball, Jack realizes he may lose her forever-unless he can take a chance on love and claim his debutante...

Once in her favorite spot beneath the arbor, she drew in a deep breath and released it slowly. The air was chilly, but there was no breeze to make her too cold without a shawl. Overhead, clematis and rose vines were still brown and dormant. On the ground beside the stone path at her feet, a myriad of crocuses bloomed gaily, while tulip shoots were coming into their full height, hinting at their splendor. And halfway up, between the white arbor post and the slatted wooden bench, a spider’s web fanned out, its occupant hidden from view.

She was just leaning closer to study it when she heard the door open and close with a quiet click. Assuming it was Myrtle on an errand for Aunt Zinnia, Lilah didn’t bother to turn. “You may tell my aunt that I will return shortly. I have need of a breath of air.”

“Do you breathe better when you’re bent at the waist?” a man’s deep voice asked.

Startled, Lilah jerked upright, whipping around to face the stranger.

Only he wasn’t quite a stranger. She’d seen him before. In fact, not more than an hour ago. And he looked just as out of place in this manicured garden as his Destrier had trotting along the London streets. She imagined, however, that man and beast would look perfectly at home galloping across an untamed moor or into battle. The man had a feral, warrior look about him. Especially with the golden, hot-ember color of his eyes beneath the arch of a tawny brow. And instead of walking with perfect pedestrian form, he prowled toward her—agile but controlled, as if always prepared for battle.

Beneath a gray tailored coat, his broad shoulders subtly rolled and shifted. The black buttons of his striped waistcoat were in a flat, straight line, suggesting a firmness, about which she likely shouldn’t ponder. The same way she should not admire the storm-cloud gray shade of his riding breeches and the way they encased his thighs, displaying every gradation of his impressive musculature.

When her gaze dipped, she also took note of the large bouquet of pink and white primroses he carried, hanging carelessly by his side. The flowers were enough to remind her of why she was out in the garden. A fresh wave of disappointment hit her.

“I believe,” she said, but when her words came out in nothing more than a whisper, she cleared her throat and began again. “I believe you’ll find my cousin in the parlor.”

He stopped just beneath the arbor, not two steps from her. As they had earlier, his lips curled into a smirk at one corner of his mouth. This time, there was no mistaking the direction of his gaze. He was, most assuredly, looking at her. “When I asked where I would find Miss Lilah Appleton, a rather frantic maid pointed in this direction. Was she mistaken?”

Lilah’s breath caught in her throat. His voice was that of a warrior’s too—sure and commanding but with an underlying edge. Do not cross me, that tone warned as much as it promised. I will fight to the death for you. She could easily hear him saying those words on a battlefield . . . or in a ballroom. Of course, his attire would be different for each occasion . . . 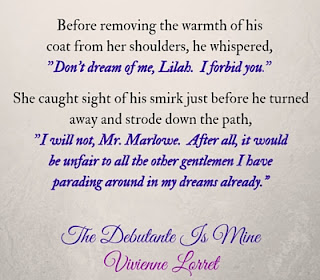 USA Today bestselling author, VIVIENNE LORRET loves romance novels, her pink laptop, her husband, and her two sons (not necessarily in that order … but there are days). Transforming copious amounts of tea into words, she is an Avon Impulse author of works including: Tempting Mr. Weatherstone, The Wallflower Wedding Series, The Rakes of Fallow Hall Series, The Duke’s Christmas Wish, and the Season’s Original Series.