Spotlight: You're Still the One (Ribbon Ridge #6) by Darcy Burke 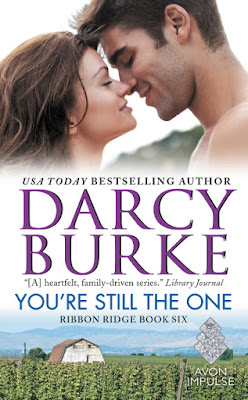 Everyone thought college sweethearts Bex Holmgren and Hayden Archer were headed for the altar… until a tragic accident sent young Bex running from a future she wasn’t ready to claim. But when she’s offered her dream job at Archer Brewing, Bex can’t pass up the chance to reconnect with the big, crazy family that once welcomed her with open arms—and the one man she’s never stopped loving.

When he returns home after a year in France, Hayden is less than thrilled to find his ex-girlfriend working for his family’s company. He’s finally moved on, and being around her rekindles long-buried feelings he’d rather ignore. But Bex isn’t the same girl he knew—she’s more mature, more beautiful, more tempting than ever—and he can’t resist the pull of the intense passion he’s only ever shared with her.

Have five years changed them enough, or are they doomed to repeat the mistakes of the past? The only thing Bex knows for sure is that for her, Hayden is still the one.

“So when do we get to taste your beer?”

She almost wanted to steer the conversation back to him, but she was the last person to press someone to reveal emotions. “The first batches should be ready Monday. One’s a loganberry ale.”

“Sounds great. What’re you calling it?”

“I asked Evan for suggestions. He came up with Legolas. Because he’s an archer, and it sounds kind of like loganberry.”

Hayden laughed. “And it’s from his favorite book and movie series of all time.”

“The other’s an IPA, but it doesn’t have a name yet.” She’d thought of a few, but nothing had stuck. “I designed it with hints of pine and spice. We’ll see how it turns out.”

“How about calling it Hot Prick?”

This time her stumble was much bigger, and he had to reach out and grab her. She laughed hard. “Are you serious?”

His eyes glinted with mirth. “Hey, we get away with calling our stout Shaft.”

“True, but Hot Prick is maybe a little over the top. How about Spice Whirl?”

He laughed. “As in the Spice Girls movie? That’s lame.”

He was right, but she pretended to be offended anyway and failed miserably as she laughed with him. “Hey, I loved that movie when it came out.”

“So did my sisters. But I doubt that’s your audience. I’m still voting for Hot Prick. Or how about Zestactular?”

“I think you’re right. Hot Prick is better. Why don’t I just go with a dirty theme? Instead of Legolas, I’ll call that one Twig and Berries.”

It was his turn to burst out laughing. “Brilliant. You need a honey beer that you can call Sweet Lick.”

She dabbed at her eye as her laughter continued. “You’re terrible. What about one I can call Goldenrod? It’ll be a wheat beer.”

He laughed with her, bending at the waist. “Pink Lips. Something with cherries. Better yet, Pop My Cherry.”

She gulped air. “Hey, when I was in Eugene I got away with naming one Beaver Beater.”

He stopped, his hand catching hers so she stopped, too. He laughed harder. “You didn’t. No, of course you did. Those Duck-loving assholes.”

She loved that he was touching her. “They especially loved it since I was a Beaver. They thought it was a funny joke, and that I was just being a good sport. I laughed the entire time.”

“Come on, they got the double entendre, right?”

“Of course they did, but since it was a Beaver slam, they didn’t care.”

He took a deep breath as he wiped his eye, unfortunately letting go of her hand in the process. “This is kind of turning me on.”

DARCY BURKE is the USA Today best-selling author of hot, action-packed historical and sexy, emotional, contemporary romance. Darcy wrote her first book at age eleven, a happily-ever-after about a swan addicted to magic and the female swan that loved him, with exceedingly poor illustrations.

A native Oregonian, Darcy lives on the edge of wine country with her guitar-strumming husband, their two hilarious kids who seem to have inherited the writing gene, and three Bengal cats. In her “spare” time, Darcy is a serial volunteer enrolled in a twelve-step program where one learns to say “no,” but she keeps having to start over. She’s also a fair-weather runner, and her happy places are Disneyland and Labor Day weekend at the Gorge.