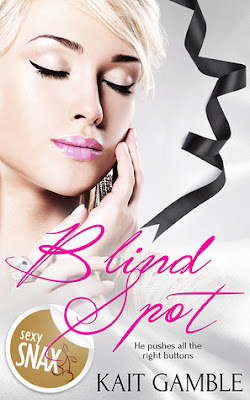 "I'm the guy who's going to blow your mind."  - Maisie's Secret Admirer

Can Maisie find what she’s always been looking for from behind a blindfold?

Maisie is in a rut. With piles of coursework, a demanding job and a tiny apartment, she never has time or money to enjoy herself. Life just isn’t giving her any breaks. The only good thing about it is her roommate, Kian.

Then a note arrives from an anonymous friend of Kian’s asking her to meet up with the mysterious admirer. It’s wild and romantic and just what she needs. The caveat? She has to wear a blindfold. The meetings start to become the one thing Maisie looks forward to after long, dreary days. But her affections for her mystery man are complicated by the long-stifled feelings she has for Kian.

Does she choose a man who is perfect for her, but out of reach, or one who’s mysterious and pushes all the right buttons?

Kait Gamble has definitely become one of my favorite erotic romance authors. Seriously, if I'm ever in the mood for a super sexy story with fabulous writing, I know that I can rely on Kait to heat things up. I love Kait's short stories, but I always wish they were longer because I'm enjoying it that much. When I first saw Blind Spot, it was love at first sight. Ironic, I know. Secret admirers... Blindfolds... Yes, please! I will say this, though. Prepare for a rather sudden ending. You know that comical "NOOOOO!"? Yeah, that was totally me. I didn't want it to end and certainly not where it did. I loved it, though. Maisie and Kian were fun to be around in the short time we get to know them. Kait's writing is sexy and fun. All of this makes for an enjoyable and steamy read. Who is Maisie's secret admirer? I have my theory...

Maisie Edwards stumbled into her tiny shared two-bedroom apartment and slammed the door behind her. She kicked her shoes off with enough force to send them ricocheting off the wall then dropped her bags on the tiny patch of space in front of the door. Not caring about the mess she’d created, she wrenched at the fastening on her jeans. After peeling them off as quickly as possible, she launched them as far as she could, refusing to think what that wet stuff she’d sat on in the subway was. All she knew was that she had to get it off her—immediately.

“You could have told me you were going to do a strip tease. I would have been ready for it.”

Tall, handsome and permanently between girlfriends, her roommate, Kian Walker, strode into the cozy living room. To Maisie, he looked more like a surfer than a game engineer. The light from his tablet shone on his chin-length blond curls and slight scruff on his chin, giving them an eerie greenish tint. The jade of his eyes was even more intense as his gaze wandered up her legs to settle with an amused sparkle on her face.

“Funny.” She tugged her shirt as low as she could get it and glowered at him.

He tapped the screen, turning off whatever he was studying to give her all his attention. “Sat in something again?”

“How could you tell?” She kicked her bags along the floor toward her room, stomped up to them and did it again. A process she would continue until they hit the foot of her bed. “I just want a shower, some food, if I can find any, and to get in bed so I can do this all over again tomorrow.”

He chuckled, picking her bags up by their straps and placing them gently on the worn sofa. “Get in there. Maybe it’ll make you feel better.”

“Maybe if you took over being PA for the most insane human being on the planet for a few weeks? Or write some of my essays for me?”

“I’ve got my own problems, Maise.” He waved the tablet at her. He’d gone from the game screen to the stark black and white of code. “Unless you’re serious and want to go over this code and figure out why it’s not working.”

“I might be.” Maisie would give it a try if it would save her from hours of endless demands that were borderline psychotic. “I’ll take a look when I get out.” She was only half joking.

She toed open the door to the bathroom then pushed it shut with her butt. The tiny room enabled her to yank back the shower curtains then turn on the water from where she stood.

Kian’s voice came from the other side of the door. “You might want to take a bath. The water’s acting weird again. I took a shower earlier and nearly burned and froze in the same amount of time it took to wash my hair.”

“Duly noted.” She switched the shower to the faucet, plugged the tub and waited for it to slowly fill.

Listening to the trickle of water, Maisie stared at herself in the mirror. Her carefully applied makeup was long gone, leaving stark freckles against pale skin. The two-toned hair she had painstakingly styled that morning hung in a black and white mess around her shoulders. Her usually bright and sparkling eyes were washed out. School and work had drained the life out of her, leaving her with a limp noodle-like appearance. Was it any wonder she hadn’t had a date in ages?

She was the complete opposite of tall, lithe models—not that they were real in the first place. But Maisie was unfortunately without the services of a professional makeup artist or Photoshop expert. The only thing she liked about herself were her eyes. People frequently commented on their cat-like shape, vivid teal color and their lush frame of lashes. But what guy would spot them from across the room and be so moved as to come running over?

If the crowds parted enough for her to be seen, he sure as hell wouldn’t take a second glance at her. There wasn’t much to capture their attention at all.

Kian said she was too hard on herself. That she was gorgeous and that anyone who didn’t see it was an idiot who wasn’t worth her time. It didn’t explain why she was alone. There were the losers who did take notice of her. They had been nothing to write home about. The few times she’d had sex had left her wondering what the fuss was all about.

As a result, she had little interest in men or relationships. She had Kian, a small circle of friends, classes and a job. Her life was full enough without the added complication of a relationship.

Yet she still wondered why love in books and on TV was so overblown. Reality was nothing like that.

Posted by CrystalBee at 9:22 PM