Review: Dirty for Me (Motor City Royals #1) by Jackie Ashenden 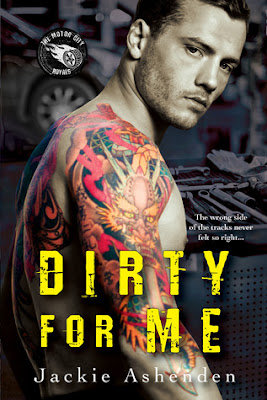 "You want my dirty hands all over your nice clean skin?" - Zee Chase

Ezekiel “Zee” Chase has a complicated past. Born into a family whose wealth grew from the seedy world of big-time crime, he ran away as a teenager and made a home for himself on the streets of Detroit. By day, the mechanic works at a local garage. But by night, he throws down with the best of them in Detroit’s gritty underground fighting scene. With all those muscles, he’s never had trouble with women–until he meets one who challenges him to the greatest fight of his life...

Tamara Eliot is a hardworking corporate high-flyer who appreciates the finer things in life, from her expensive perfume to her designer handbags. More than anything, though, she likes to be in control–and when Zee explodes into her life, she feels anything but. He’s the definition of a bad boy: brash, fiery, and of course, irresistibly hot. And there’s a darkness about him that keeps her coming back for more. As Zee takes Tamara deeper into a world she never knew existed, she just might prove to be the one opponent he won’t be able to dominate–at least not without some pleasurable convincing...

Before moving on to my review, I'm excited to say that this is my 1,000 post! Thank you for being with me along the way...

Confession time... I love sex scenes in romance. Sweet and romantic or hot and dirty... Either way, I'm happy as a clam. When it comes to hot and dirty, there is something that I, quite honestly, crave when reading a steamy erotic romance. Don't get me wrong, I'm all for a good wall-banging. Characters that can't wait for a nice, flat surface are hot. But one position I want more of in books is hard headboard banging. The type of sex that makes the characters wish their neighbors are either deaf or they just don't give a hoot. Jackie Ashenden... You are an author after my own heart because hot damn... That was some sizzling sex. And now that I'm officially blushing... Let's move on to my review...

I had no clue what I was in for with Jackie's Dirty for Me. I knew it was an erotic romance, but I wasn't quite expecting the carnal desire flowing between Tamara and Zee. Holy cow, that was all kinds of naughty. And I flipping loved every moment. Finally able to spread her wings, Tamara takes full advantage of her new sexual desire. The guilt she carries around with her forces her to live inside the cage her parents and long-term boyfriend have built around her. Thinking that there is no way out, Tamara decides that if this is all she has to look forward to, then she's going to live life while she can. And that freedom comes in the form of Zee. Burdened by his own troubling past, Zee has lived by the "one and done" life when it comes to hooking up. He can't afford to let anyone get close and when Tamara slinks her way into his life, he knows that trouble is going to come knocking. And sure enough, it does. Danger doesn't stop them from exploring each other and secretly daydreaming of what could be.

I loved Dirty for Me, everything from the complex characters to the amazing sexual tension to Jackie's fun writing style. It was more than just an erotic romance with characters that go at it like bunnies. The character's complex and dark backgrounds gave them so much depth. My heart broke for them and it soared for them in a matter of chapters. I loved the fine line the author walked with a character like Tamara. Some may frown upon her sexuality, but others can see how she craves the raw passion that they share. I loved that Jackie took the risk creating a character like that and I hope we see more in the future. Dirty for Me was my first Jackie Ashenden book, but I already know that it will not be my last. I can't wait for Rachel and Levi's story!