Review: Chased by Love (The Ryders #3) by Melissa Foster 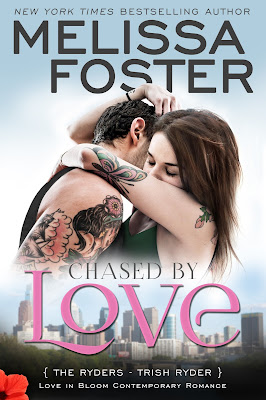 Actress Trish Ryder takes her job seriously and has no time for those who don’t. When she’s awarded a major role in a new movie featuring America’s hottest rock star, Boone Stryker, she’s beyond excited. The six-two, tattooed hunk of burning desire is known for his dedication to his craft—but when he ditches their first meeting, she begins to wonder if he’s just another rocker with a great PR team.

Sex, booze, women, and music pretty much sum up Boone Stryker’s private world. He’s coasted through life playing by his own rules with plenty of people willing to cover his tracks, and he’s not likely to change—until he meets a woman who refuses to give him the time of day, much less anything more.

Sparks fly from the first moment Trish and Boone meet—Tensions run hot and desire runs hotter when they’re trapped together on a remote location with no place to hide. Will sparks ignite, or will a hurricane douse the flames?

It's that time again! Yep, I'm back with a Melissa Foster review. I wonder if these reviews should have a theme song. If you've been here for a previous Foster review, then you'll know that her books are addictive. Just when I finish reading one, Melissa announces the release of the next book. Which is fine by me because I clearly can't get enough. Since I have reviewed most of her books, I like to pick a word or phrase that I feel best describes my thoughts because I don't want my reviews to sound repetitive and, to be quite honest, Melissa would probably have me committed if I gushed about her work every time. I had a bit of a difficult time picking a word for Chased by Love, but by the end of the book, the word I came up with was sultry. There were two scenes in particular that inspired my pick (as well as a few daydreams). I won't go into detail about those scenes because they are best experienced first hand, but holy cow! Although I'm not one to sing in public, I'd be the first to sign up if Boone needed a partner. I will tackle anyone that dares to get in the way... I'm just sayin'. I adored Chased by Love. Not only was it sultry, it was also one heck of an emotional ride. I've been a fan of Trish since she first appeared as a background character and I fell for Boone from the very beginning. Another fabulously fun and sexy book from Melissa. Gage and Sally's book can't come soon enough!