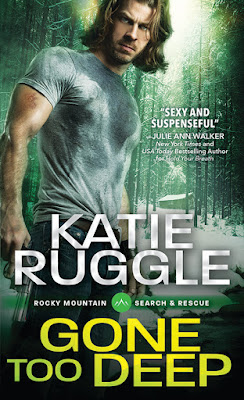 In the remote Rocky Mountains, lives depend on the Search & Rescue brotherhood. But in a place this far off the map, trust is hard to come by and secrets can be murder…

George Holloway has spent his life alone, exploring the treacherous beauty of the Colorado Rockies. He’s the best survival expert Search and Rescue has, which makes him the obvious choice to lead Ellie Price through deadly terrain to find her missing father. There’s just one problem—Ellie’s everything George isn’t. She’s a city girl, charming, gregarious, delicate, small. And when she looks up at him with those big, dark eyes, he swears he would tear the world apart to keep her safe.

With a killer on the loose, he may have no choice.

Ellie’s determined to find her father no matter the cost. But as she and her gorgeous mountain of a guide fight their way through an unforgiving wilderness, they find themselves in the crosshairs of a dangerous man in search of revenge. And they are now his prey…

Shifting so she had a better view, Ellie made a face. “Sorry I was so slow today. How long do you think it’ll take to get to the cabin?”

The wind picked that second to howl, the gust shoving at the tent as if intent on blowing them off the mountain. Ellie leaned closer to George.

“Depends,” he said after the wind died down enough that she could hear him. “This storm might last a couple of days.”

Huddling deeper in her sleeping bag, she asked, “Do you think he’s out in this?”

“Baxter? Could be. When did he leave?”

“The deputy, Chris, saw him Sunday morning at the Blue Hook trailhead.”

“With hiking and camping, you mean? Yes. He took me with him a few times when I was little, before… I’m just worried because he seemed so confused and scared the last time we talked on the phone.”

“He’s most likely already there.” His finger brushed the spot on the map where the cabin was located. “If not, he’ll have supplies.”

“That’s true.” Giving in to the need for contact, even if it was with two sleeping bags between them, Ellie leaned against George’s side. She ignored it when he went rigid, and soon she felt some of the tension leave him. “Thanks for agreeing to be my guide. If Joseph had been the one to bring me out here, I’d probably be running out into the storm just to get away from his wandering hands.”

The stiffness returned to George’s body at the mention of Joseph.

“Do you not like him?” she asked, tilting her head to look at him. His face was canted away from her, though, so she couldn’t see his expression. “Is that why you decided to take me?”

There was a long pause before he spoke. “He’s good at what he does. You would’ve been safe…in that way.” He put an odd emphasis on the last three words.

“So, he wouldn’t have led me into an avalanche, but I might have woken up in the night with him trying to squeeze into my sleeping bag?” Her voice was teasing, her discomfort with Joseph diluted by distance and George’s reassuring presence. When he turned his head to meet her eyes, though, his expression was completely serious.

“The other search and rescue people, they talk.”

Unlike you, she wanted to say, but she kept her mouth shut instead. George was saying more than he ever had before in her presence, and she didn’t want to make him shut down again by cracking jokes.

There was an entire story in his two sentences, and Ellie’s stomach churned a little at the thought of being trapped in the tiny tent in a snowstorm with Joseph rather than George. She wanted to think it would never have been an option, but then she remembered her desperation at the fire station two nights before.

Leaning her head against his shoulder, she said, “I’m glad it was you.”

They sat in silence for a few minutes, listening to the wind shrieking outside the tent, until Ellie sighed and sat up straight.

When George looked at her in question, she admitted, “I need to pee, but I really don’t want to go outside.”

He reached over to grab her coat. She let the sleeping bag fall to her waist, and he held her jacket for her so she could slide her arms into the sleeves. Taking a bracing breath, she shoved the sleeping bag off her legs and yanked on her windproof pants, skipping the fleece middle layer.

As she fished the stuff sack containing her boots out of the bottom of the mummy bag, she noticed that George was pulling on his own outer layers.

“You don’t have to come,” she protested, pulling on her boots and wincing as they instantly pressed on her blistered spots. Dipping her head to hide her grimace, she pulled on her bootlaces.

He frowned and covered her hands with his. “Not so tight. No wonder your feet were cold.” Pushing her hands aside, he loosened the laces and then tied them before repeating the process on her other boot.

“I thought they wouldn’t rub as much if they were tight.”

Shaking his head, he tugged on his own boots. “Not worth it. It takes away the cushion of insulating air, plus it cuts off your circulation.”

“Besides, they gave me blisters anyway,” she said wryly, unzipping the door. “And, seriously, I’ll be okay by myself. You don’t have to supervise.” She dug a couple squares of camping toilet paper and a flashlight out of her pack.

“I won’t watch you,” he huffed, and she turned to give him an appalled look.

“I didn’t think you would—at least not until you said that.” His cheeks had flushed above his beard, and Ellie had to bite back a smile. “I just meant that there’s no reason for both of us to get cold.”

He grunted, his face still red. “I have to go, too. Move. You’re letting in the cold air.”

Losing the battle against her grin, she faced forward to hide it. “Yes, sir.”

Once she crawled out of the vestibule, the wind smacked the smile right off her face.

“Don’t go far!” George bellowed over the wail of the wind.

It was cold, windy, and she just wanted to get back into her sleeping bag, so Ellie didn’t take the time to point out the ridiculousness of his warning. She barely stepped to the side of the tent before yanking down her pants. Biting back a shriek as the cold wind slapped her bare parts, she hurried as fast as she could. Her pants were scarcely back in place before she dove for the tent entrance. George followed her in just seconds later.

“Do you have any wet wipes?” she asked through chattering teeth. “I’m filthy.” That morning, she’d brushed her teeth and washed her hands and face with some melted snow, but it would be nice to clean up more than once a day. She added “washing her hands” to the list of things she’d never take for granted again once she returned to civilization.

He pulled out an alcohol wipe from the first-aid kit and offered it to her, but Ellie shook her head.

“Better to keep those in case of emergencies.” Her boot rubbed against her heel as she removed it, making her wince. “Or blisters.”

With a nod, he returned it to the kit and started stripping off his coat.

Once they were tucked back into their sleeping bags, Ellie turned onto her side facing George and propped herself up on an elbow. “How about Truth or Dare?”

His eyes widened with a look of sheer terror.

“That’s a no, huh?” When his look of panic didn’t change, she waved her hand, dismissing the idea. “It would’ve been hard to think of dares we could complete without leaving our sleeping bags, anyway. Okay, what about Tic-Tac-Toe?”

George couldn’t sleep. He couldn’t stop looking at her, and sleeping required closing his eyes. Therefore, sleep was not an option. He didn’t mind. Once she’d collected her father and returned to the city, he’d have plenty of dull, empty nights he could fill with sleep.

After several rounds of Tic-Tac-Toe and Hangman, she’d fallen asleep while the flashlights were still lit. Despite the nagging voice in his head telling him that he was wasting batteries, he left them on so he could see her. His conscience lectured him, said that he was as bad as Acconcio, leering at her as she slept.

A dark strand of hair had escaped her hood and lay against her cheek. His hand twitched, needing to brush it away from her face, but he didn’t touch her. That would be crossing the line, a line he already straddled by watching her without her knowing.

She was just so pretty. When he’d first seen her sprawled in the coffee shop parking lot, with her perfectly smooth and glossy sheet of hair and impractical city clothes, he’d assumed she’d be snobbish. Then she’d met his gaze, her eyes warm and round, shining with bits of green and gold and brown, and he’d changed his mind. She wasn’t a snob, but a china doll, beautiful but fragile. When he’d picked her up and carried her to the door, her lips had rounded so they’d matched the shape of her eyes, making her look even more doll-like.

He hadn’t wanted to lead her into the wilderness. Something that delicate shouldn’t be exposed to cold and danger and exertion. When Acconcio had pushed himself against her, though, grabbing her with that look on his face, the one that reminded George of a well-fed house cat playing with a mouse, he couldn’t let it happen. He couldn’t let the coyote lead the bunny into the wild.

The fragile doll had surprised him, though. Although slow and unfamiliar with things that were second nature to George, she’d listened and helped and kept on walking, no matter what.

It worried him how much he liked taking care of her, feeding her and doctoring her feet and making her tea. It gave him ideas he shouldn’t be considering, like keeping her. The thought of having someone else living in his house for the first time since his father died was as seductive as the feel of her breath against his neck when she’d rolled into him the night before.

And she’d kissed him.

His breath left his lungs in a harsh exhale as he focused on her lips, the lips that had touched his, leaving him frozen while every part of him burned. As much as he reminded himself that it had been a joke, a tease, a way to win the silly game she’d insisted they play, he still couldn’t shrink it down to the right size in his own mind. It was huge, and important, and he’d always remember those few, earth-shaking seconds.

How could he forget his first kiss?

When she’s not writing, Katie Ruggle rides horses, shoots guns, and travels to warm places where she can scuba dive. A graduate of the police academy, Katie received her ice-rescue certification and can attest that the reservoirs in the Colorado mountains really are that cold. While she still misses her off-grid, solar- and wind-powered house in the Rocky Mountains, she now lives in Rochester, Minnesota, near her family.