Review: Hero of Mine (Men in Uniform #2) by Codi Gary 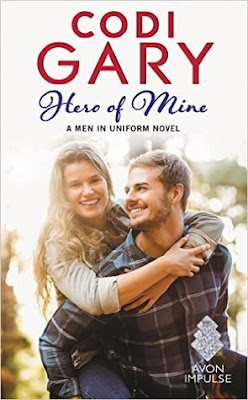 "I never said I didn't have a heart. I just keep it heavily guarded." - Tyler Best

The men of Alpha Dog, a second chance program for at-risk teens, work hard and play hard. And when it comes to protecting the women they love . . . nothing stands in their way.

Danielle Hill used to live on the wild side, until a surprise pregnancy forced her to get her act together. Now her whole life revolves around her young son, and she will do anything to keep Noah’s heart protected, even if it means avoiding the Marine who makes her want to be oh so bad . . .

Tyler Best loves his family, his friends, and his life, and he plans on living it to the fullest after nearly losing it. But Tyler didn’t bank on running into a beautiful blond with blazing green eyes and temper to match his. Tyler always thought he wasn’t ready to settle down, but Dani and Noah make him rethink his playboy ways . . .

Only just as these two start to build something, a shadow from Dani’s past comes back to haunt them. But Tyler will do anything to keep her and Noah safe . . . anything.

Confession time... When I get a new book from one of my favorite authors, I tend to dive right in the moment it appears on my Kindle. Why am I confessing this? Well, I did this with Codi Gary's Hero of Mine. I just had to read it when the ARC copy appeared in my Kindle... In June! For the past couple of days I managed to do a quick re-read. And that brings me to the real message in this confession... Goodreads needs to have a way to allow people to mark a book read as many times as possible. That way it can count twice on my 2016 challenge!

I adore Codi Gary. She can turn a not-so-great guy into a swoon-worthy hero like no other. To be completely honest, I was not a big fan of Tyler Best when he appeared in the previous Men in Uniform book when he was an unapologetic player. He's not necessarily a womanizer, he just loves to be with women without having a commitment. His progression and growth between that book and Hero of Mine was fantastic. I loved watching him fall for Dani and her adorable son. He had to prove himself to everyone that he's a changed man. Not just Dani, but the readers as well. Dani is a strong woman. She's a single mother doing her best to give Noah everything his little heart could desire. She's understandably weary of Tyler and his past, but once she sees the good in him, it's only a matter of time until their budding relationship blossoms. I loved how fate kept bringing Tyler and Dani together. Talk about persistence! I loved Hero of Mine enough to devour it in one night. It had Codi's fun and flirty writing with just a small hint of suspense, which I felt made the ending more emotional. I'm glad to see Codi is spreading her wings a bit. Fun addition to a series that I'm already loving.

Get to know the
Men in Uniform series!

An obsessive bookworm, Codi Gary likes to write sexy small-town contemporary romances with humor, grand gestures, and blush-worthy moments. When she's not writing, she can be found reading her favorite authors, squealing over her must-watch shows, and playing with her children. She lives in Idaho with her family. Codi is represented by Sarah E. Younger from the Nancy Yost Literary Agency.