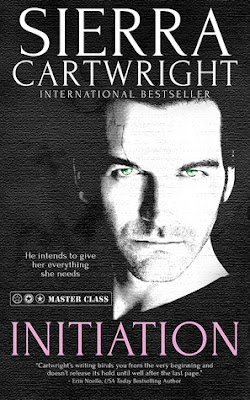 "I'm a greedy man, Jennifer. I'll take as much of your time as you're willing to give me. An hour, a day, another night, a week, maybe even more." - Logan Powell

When wannabe sub Jennifer Berklee calls him Master and begs him to flog her, PI Logan Powell knows all his military training won’t be enough to keep his jaded heart safe.

Private investigator Logan Powell does the women of the world a favor by avoiding emotional entanglements. They deserve to be loved and cherished. And he’s not capable of it.

But when the stunningly sexy Dom Logan Powell offers to scene with her, she is overwhelmed and flees.

One evening, Logan and Jennifer are set up by well-meaning friends. This time, Logan is determined not to let her go. Jennifer will submit to him, no matter the cost to either of them.

When I am in the mood for an erotic romance, there are a handful of authors that I know will never disappoint. One of which is the fabulous Sierra Cartwright. I know that when I pick up one of her books I'll instantly fall in love with the hero and immediately want to be the heroine. Her characters are always strong and open with their various levels of kink. Like every other of Sierra's books, Initiation had me hooked from the very first page. Logan and Jennifer... Where do I start? Their chemistry and sexual tension scorched from the moment they laid eyes on each other. I loved how "gently" introduced Jennifer into his world. It was always about her pleasure and allowing Jennifer to test her own limits. That's another thing about Sierra's heroes, they are always generous lovers. If only they were real... *wink* Jennifer was strong enough to try something new. She relished in freedom in wanting more. Together they embark on a new D/s relationship that is not only mutually satisfying, but also helps both heal from the emotional mess their previous relationships left them in. As always, Sierra's writing was so much fun. Not only did she have me reaching for a fan, but I also found myself giggling in the middle of the night. I don't know where this series is going next, but I'm excited for the fun ride ahead

As if sensing his attention, she glanced over at him.

He folded his arms across his chest as their gazes locked.

Even across the distance, he saw her shiver.

After a few seconds, she shook her head and turned away.

Simple Simon took a step in her direction.

Suddenly, Logan realized he did want to be the man behind her, pressing her against the wood, instructing her to lift her arms high so he could affix her wrists to a pair of cuffs.
Instead, another man had that honor.

The man secured her in place and she immediately pulled her right wrist free. If Logan were in charge, he wouldn’t have allowed that to happen. Even if all she wanted was a taste of his dominance, he’d make sure she would never forget the experience.

After putting her wrist back in place, Master Simon rubbed her buttocks through her skirt.

Because he needed human contact to maintain his sanity, he showed up at Joe and Noelle’s events several times a year. While watching others scene interested him, he’d rarely gotten aroused from it.

Then again, he’d rarely had this kind of visceral reaction to a woman.