Review: A Fine Mess (Over the Top #2) by Kelly Siskind 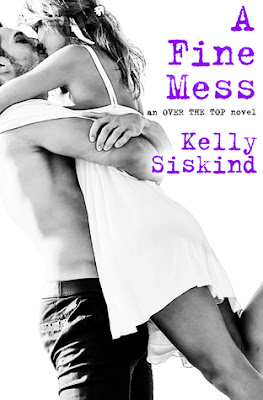 Some guys should come with a warning label...

Sawyer West is Mr. One-Night Stand. He doesn't do relationships or promises or feelings. He's never cared enough to get involved. Until Lily Roberts. She's sweet and shy and sexy as sin, and resisting her is testing his self-control. She believes Sawyer can be a better man, and for the first time in his life, he wants to be. But change isn't easy, and Sawyer would do anything to protect Lily from his past self. Even break his own heart...

After loving the first book in Kelly Siskind's Over the Top series, I was super excited to pick up the second book. Gotta tell ya, A Fine Mess did not disappoint. While the first book was filled with funny and sarcastic moments, Sawyer and Lily's story tugged on my heart more. After getting to know each other and growing closer together, Lily realizes that she's developing feelings towards Sawyer. Believing he felt the same, she takes the difficult step forward and breaks things off with her long time boyfriend. Rather than being happy that he can now act on his feelings towards Lily, Sawyer is scared out of his mind. His family does not have the best history when it comes to fidelity and damned if he'll break Lily's heart when he inevitably does the same, or so he tells himself as a mantra to keep her at arm's length. Watching them dance around each other left me with two conflicting emotions. I loved Lily. The more we got to see her imperfections, the more I wanted to be her friend. Sawyer, on the other hand, frustrated me to no end. I didn't like how he kept making Lily second guess herself. He's not really leading her on, he just refuses to see what could be. If he would stop and listen to his family for a second, then he could have avoided a lot of heartache. I loved how they supported each other, especially Sawyer encouraging Lily to seek counseling. I think their relationship will be stronger for it. I loved that A Fine Mess still had the fun and lighthearted moments while also taking me on an emotional journey. I loved that Kelly's characters aren't perfect, but that helps the reader relate to them more. I can't wait for the third book in the series and finally learn that it going on between Nico and Raven.