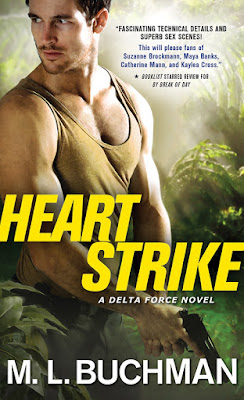 SERGEANT RICHIE “Q” GOLDMAN: The smartest soldier on any team

SERGEANT MELISSA “THE CAT” MOORE: Newest on the team, determined to be the best

Rescued from an icy mountaintop by a Delta operative, Melissa Moore has never met a challenge she can’t conquer. Not only she will make Delta Force, she will be the best female warrior in The Unit, and woe to anyone who says otherwise. Technical wizard Richie Goldman is Bond’s “Q” turned warrior. A genius about everything except women, he takes point on the team’s most dangerous mission yet. When the Delta Force team goes undercover in the depths of the Colombian jungle, surviving attacks from every side requires that Richie and Melissa strike right at the heart of the matter…and come out with their own hearts intact.

The first book in my new Delta Force #1, Target Engaged was called “His best yet” by Booklist and was also named a finalist for RWA’s prestigious RITA award.

Well, my answer to that is Heart Strike, releasing August 3rd, 2016. But it got me thinking. What are my favorite sequels? For a change-up, I focused on the action side rather than the romance, and here’s what I came up with.

4. Jason Bourne
Jason Bourne #2 & #3 didn’t disappoint…for a single second. They sustained the tension, remained true to the character (an essential), and found ways to ratchet the tension higher in each successive one. Number 4? Not so much.

3. The Wrath of Khan
The Wrath of Khan notoriously took one of the most disappointing movie launches ever, Star Trek: The Motion Picture, and created a massive and incredible franchise that has continued ever since. Khan is still one of the great, over-the-top, out-of-control villains.

1. The Dark Knight Rises
This choice surprises me. I like the Dark Knight reboot, but I’m not a big fan of the comic book heroes in general and frequently skip them. It took me a couple of years to catch up with this one and what I love about it isn’t the acting (which was wonderful), or the action (which was dramatic). It was the story. The writer and director completely set us up to thinking this story was going one direction…then in the last half hour it went another way entirely. AND that twist was perfectly in character, just wholly unexpected.

Now, I write romantic suspense, so the ending is fairly predictable, but I certainly hope that you enjoy the journey of my latest Delta Force novel, number 2, Heart Strike!

Action sequels, even romantic suspense ones, only have a short moment of introduction before it’s time to get everyone moving…and moving fast! Delta Force #2, Heart Strike, opens with the team from Delta #1, Target Engaged, mapping coca fields in Boliva. They’re targeting them for massive defoliant drops from the CIA’s 747 tanker plane.

Trouble comes when command issues an order for the team to pull out ahead of schedule to pick up a new team member and a new assignment.

Thankfully, no one anywhere adapts faster to a changing situation than a team of Delta Force operators.

Sunrise was less than an hour off when Chad jostled his shoulder.

Richie hadn’t been asleep and barely managed to suppress an oath as Chad shook him hard enough to wake the dead—his idea of humor. Richie noticed that he was a little more cautious with Duane who often woke with his knife half-drawn. Kyle and Carla were already at the hut’s entrance.

Kyle had taken one look at the order and, in minutes, outlined a plan of how they were going to exit the farm with hopefully minimal exposure and risk. The guards they were anticipating would be off duty and the patrol timing would be wrong, but Kyle’s plan was as solid as they could get with what they knew.

No way would Richie be missing this place. Dirt floor, woven grass mat, and a thatched roof that could really use some thatch before the next rainstorm but wasn’t going to get it.

He felt sorry for the laborers. Some of the farmers were about to have an even worse season than the last one. At a big site like this, they were little better than slaves. Once the coca was gone, they’d be free, but with no assets and no working farm crop. In the coca business, locals just weren’t part of the profit equation.

Rolando and the drug lord’s other armed guards Richie liked well enough, but had less sympathy for.

The Delta team slipped out into the darkness, just a hint of the blue in the sky that was already washing out the fainter stars. They passed the farmers’ huts and were almost to the road leading out of the camp.

“Where are you going, amigos?” Rolando, his AK-47 no longer over his shoulder but now in his hands.

“Hey, buddy.” Chad started forward, but stopped and tried to look stupid when Rolando flicked off the safety.

Carla stepped forward with an easy sway of her hips. Her dirty blue work shirt unbuttoned far enough to reveal that her assets weren’t all that much less impressive than the fabled Mayra’s.

Rolando’s eyes dropped to her cleavage.

She moved a hand up to his chest. With a little flick of her wrist, she revealed the long KA-BAR military knife she was holding and rammed it up under his chin and into his brain.

“That’s for trying to ram it up my backside without asking.”

“He what?” Kyle snarled, but Carla didn’t waste any time answering. If there was ever a woman able to defend herself, Richie knew it was Carla Anderson.

Then Rolando collapsed to the ground and his finger must have snagged on the trigger. A single 7.62mm round gave a loud crack and zinged off into the trees.

“Shit!” the whole team said pretty much in unison.

With their clandestine departure blown, Chad swept up the AK-47 and fired a security round into Rolando’s forehead.

In seconds, they were fifty meters away and moving fast. Kyle had Rolando’s sidearm and Carla had a subcompact Glock 27 that she’d produced from somewhere—where was one of the questions Richie suspected he’d be better off not asking. Still, it was an interesting problem because they’d all been checked on arrival as being unarmed. Richie had pre-buried his GPS and satellite gear in the jungle, carefully crossing then recrossing the mined perimeter before they’d come into the camp so that he could retrieve them once the team had been accepted.

The two guards at the main gate were half-awake when they stumbled to their feet. They went back down fast and Richie and Duane now had AK-47s as well. Chad stripped them of a pair of Makarov handguns, tossing one to Richie that he caught midair.

There was an old Jeep parked by the gate, but neither of the guards had a key. It was probably back in the open, on Rolando’s body. Chad started hot-wiring it while the rest of them stood watch.

Then Richie heard it. Distant at first, but building fast. The four-engine gut-thumping roar of a loaded 747.

The Jeep’s engine roared to life and they piled in.

Duane tossed his AK-47 to Chad and dove into the driver’s seat—he was the best driver they had. He’d been working up the sprint-car circuit toward NASCAR when he’d taken his detour into the military.

Duane raced the Jeep out of camp along the road, praying for no booby traps.

Then the largest tanker plane in the world descended and began its run.

The 747, converted for firefighting, had been put into deep storage in the Tucson desert when its owners went out of business. The CIA had found another use for the massive plane, which now began its dump of twenty thousand gallons—over eighty tons—of defoliant across the exact coordinates that Richie had sent to them just six hours ago.

His Delta team had been to twelve coca farms in the last six months. And the 747 tanker had visited each in turn. Twelve farms that wouldn’t produce a single leaf of coca anytime soon.

They all ducked and hung on as Duane rammed the heavy wooden outer barrier at thirty miles an hour. It blew apart. A four-by-four shattered the windshield and Carla knocked the remains of the glass clear with the butt of a Chinese QBB machine gun she’d acquired somewhere along the way before turning it around to shoot a guard who’d been standing well clear of the gate.

Richie kept an eye out to the rear, but no one was following. If they were, they’d have a long way to go. The team had been pulled out of Bolivia. They were being tasked to a new assignment.

After six months training together and another six in the field, it was the last line of the message that had worried them all.

M. L. Buchman has over 35 novels and an ever-expanding flock of short stories in print. His military romantic suspense books have been named Barnes & Noble and NPR “Top 5 of the year,” Booklist “Top 10 of the Year,” and RT “Top 10 Romantic Suspense of the Year.” In addition to romantic suspense, he also writes contemporaries, thrillers, and fantasy and science fiction.

In among his career as a corporate project manager he has: rebuilt and single-handed a fifty-foot sailboat, both flown and jumped out of airplanes, designed and built two houses, and bicycled solo around the world.

He is now a full-time writer, living on the Oregon Coast with his beloved wife. He is constantly amazed at what you can do with a degree in Geophysics. You may keep up with his writing at www.mlbuchman.com.