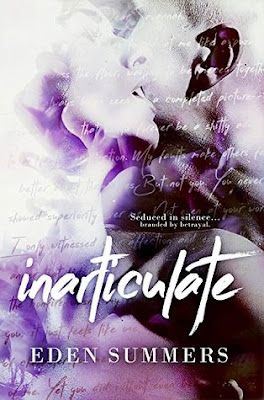 He's silent - but his touch speaks louder than words.

At first sight, Savannah is drawn to the harsh appeal of a man who refuses to talk to her. Keenan's hard stare is arrogant and unapologetic. The quirk of his sensuous lips is cocky and in control.

But there's more. There's something deeper he's trying to hide behind those steely grey eyes - a slight hint of vulnerability which captures her intrigue.

She'd been warned, told that his silence hides a myriad of lies capable of affecting her career and relationships with loved ones. Only she can't help herself. Testing Keenan's defenses is an addiction she can't deny.

Falling in lust is easy. Learning his secrets comes with a price. The cost? Her broken heart.

Confession time... I'm not the biggest fan of romances that are written in the first person. To me, the best thing about a romance book is following both characters as their relationship blossoms. Whether it started as a friendship or if they were total strangers at the beginning of the book, some of my favorite moments happens when that first bolt of attraction stuns them. So when I was first approached to review Inarticulate, I admit I was intrigued with the idea of the hero not speaking. Will it be solely in Savannah's POV? If it's in duo perspective, how will the author convey Keenan's feelings? Since I've read a previous novella from Eden Summers, I took the leap. I knew that she can write a sexy romance and I was excited to experience that aspect of her writing once again. What I wasn't prepared for was the emotional journey that Savannah and Keenan took me on. What stood out the most to me was Eden's ability to give Keenan a voice when he wasn't able to speak. I loved how Eden found a way for Keenan to express his feelings during the most important scenes. Yes, he use some sign language and has the ability to use his phone, but the way he reflects on those pivotal moments took Inarticulate to another level of creativity. I'm not going to say more about these chapters because they are best experienced first hand. Just know that it completed the story for me. Overall, I loved the ride that I experienced while falling in love with Eden's characters. Her writing was fantastic and so expressive, I could not stay away for very long. I'm excited to continue reading more of Eden's books in the future.

Eden Summers is a bestselling author of contemporary romance with a side of sizzle and sarcasm. She lives in Australia with a young family who are well aware she's circling the drain of insanity. Eden can't resist alpha dominance, dark features and sarcasm in her fictional heroes and loves a strong heroine who knows when to bite her tongue but also serves retribution with a feminine smile on her face.

Posted by CrystalBee at 9:51 PM