Spotlight: My Fair Princess (The Improper Princesses #1) by Vanessa Kelly 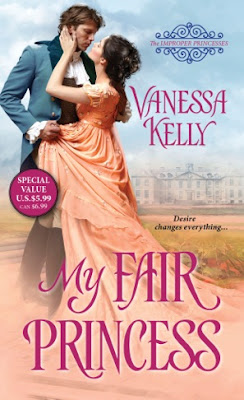 First, Vanessa Kelly brought readers The Renegade Royals. Now, in a delightfully witty new series, she introduces The Improper Princesses—three young women descended from royalty, each bound for her own thrilling adventure . . .

Despite being the illegitimate daughter of a prince, Gillian Dryden is happily ignorant of all social graces. After growing up wild in Italy, Gillian has been ordered home to England to find a suitable husband. And Charles Valentine Penley, the excessively proper, distractingly handsome Duke of Leverton, has agreed to help transform her from a willful tomboy to a blushing debutante.

Powerful and sophisticated, Charles can make or break reputations with a well-placed word. But his new protégée, with her habit of hunting bandits and punching earls, is a walking scandal. The ton is aghast . . . but Charles is thoroughly intrigued. Tasked with taking the hoyden in hand, he longs to take her in his arms instead. Can such an outrageous attraction possibly lead to a fairytale ending?

The next thing Gillian knew, he was shoving her down onto the sand. He came down on top of her, mashing her flat.

It took her a moment to catch her breath, since there wasn’t a particle of air between them. She was certainly becoming intimately acquainted with various parts of Leverton’s impressive anatomy.

“Who is it?” She felt a spurt of hope. Perhaps some of the smugglers had returned. Now that Teddy was safely out of the way, Leverton might even help her track them. They might not see eye to eye on everything, but he would be furious that smugglers were trespassing on his lands.

“Wait,” he breathed out.

He cautiously lifted his head to peer over the rise of sand between them and the beach. The sound of a cantering horse, hooves thudding into the hard-packed flats, quickly grew and then faded away down the beach. Leverton still didn’t move, his attention focused in the direction of the mysterious rider.

“Could you please get off me,” she finally said. “You are completely squashing me.”

He looked down at her and frowned, as if surprised to see her there. Gillian raised a sardonic brow.

“I beg your pardon,” he murmured, as if they were on the dance floor and he’d simply trod on her foot.

He rolled off, but kept an arm slung across her waist. Gillian tried to push it away, but it felt like a tree trunk was pinning her down. She let out an aggrieved sigh and dropped her head back onto the sand.

“Whoever it was, he’s long gone,” she said. “Why are we still lying here?”

“I just wanted to make sure,” Leverton answered. “I think it’s now safe to get up.”

“I should hope so. I feel like I’ve spent half the night lying on this blasted beach.” With nothing to show for it but sand in her breeches and an irate duke.

Leverton rolled into a crouch and then smoothly rose. He reached down a hand to pull her up. “And whose fault is that?”

Gillian pulled the tails of her coat back in place and started brushing herself off. “Not mine. If you hadn’t shown up, I could have tracked the smugglers back to their lair. That, as you must admit, would have been very helpful.”

“Their lair? Good God, you’ve been reading too many lurid novels. Wait, I forgot,” he said, holding up a hand. “You actually believe you’re living in one. You fancy yourself some sort of heroine, dashing about, trying to right all the wrongs of the world.”

“No, I fancy myself as the hero.” She wiggled a leg, hoping to at least shake some of the sand from her backside down to her boot. “The heroines are always moaning and falling down in a faint, waiting for the men to rescue them. I don’t have time for that sort of nonsense.”

“That is quite obvious to anyone who knows you. Well, I think we’ve both had enough larking about for one night. Are you ready to go, Miss Dryden, or shall we wait to see the sunrise?”

“There’s no need for sarcasm, Leverton,” she said as she bent to retrieve her cap. It had fallen off when he tackled her. “And you still haven’t said if you recognized the rider. It wasn’t one of the smugglers, was it?”

“No, it was a riding officer, on patrol. He was obviously too late to be of any use.”

“Why didn’t you flag him down?” she snapped.

“As I just said, there was no point,” he replied with exaggerated patience. “The smugglers were long gone.”

“No point? He was on a horse. He could have easily caught up with them. What were you thinking to just let him go by like that?” Her mother would be horrified at the way Gillian was speaking to him, but she couldn’t help it. Leverton had let another opportunity slip away. What was wrong with the blasted man?

“I was thinking I didn’t want to expose you to more scurrilous gossip,” he said, clearly growing irate again. “I am trying to protect your reputation, Miss Dryden. Explaining your presence here in the middle of the night to a riding officer would hardly assist me in achieving that goal.”

“I don’t give a hang about my reputation,” she shouted. “That was our best chance to find my jewels, and you ruined it.”

“It is blindingly obvious that you care not a whit for your reputation. You take every occasion to be outrageous, to behave like a—”

He bit off whatever insult it was he was going to level. Then he sucked in a deep breath, as if trying to calm himself.

She waved an impatient hand, ignoring the way her chest seemed to twist and tighten. His tone practically reeked with disdain. “Light-skirt? Doxy? Which is it? Go ahead and say it if it makes you feel better. It won’t bother me in the slightest.”

It was a lie. She’d spent a lifetime learning to ignore the acidic little jabs and the steady drip of smirking insults, but the pain they’d caused was nothing compared to knowing he felt the same. It seemed to hollow her out, leaving an empty darkness that could never be filled.

“Well, it doesn’t matter. Now, can we please go?” She needed to move, to get away from him. Tears stung her eyes, and she could feel her throat going thick. The notion that she would cry over this—over him—was simply appalling. Gillian hadn’t truly cried since the death of her stepfather. That Leverton had the power to call forth such a dreadful sign of weakness infuriated her.

Perversely, that made her want to cry even more. What in God’s name was wrong with her?

She tried to shove past him again, but he stepped in front of her and grasped her shoulders.

“Not until you let me apologize,” he said in a gravelly voice.

She tried to wriggle out from under his grip. His gloved fingers held her tight.

“I don’t need any apologies from the likes of y-you.” Gillian almost fainted in horror to hear the break in her voice. She’d called him a coward, and yet here she was acting like a silly female with the vapors. As if his words truly had the power to harm her.

Sadly, it appeared they did.

She sniffed as she tried to steady herself. Unfortunately, one exceedingly defiant sob seemed intent on forcing itself out.

“Are you crying, Gillian?” Leverton asked in a voice of soft amazement.

“Don’t be ridiculous. As if I would cry over something as stupid as this.” As if she would cry over the mistaken assumption that he liked her, when apparently he did not.

“Then what is this I see on your cheek?” He gently brushed a gloved finger over her face. “Yes, there is a tear, sparkling like a jewel. How extraordinary.”

“Don’t you dare make fun of me.” She glared up at him, rather a tricky feat when one was trying not to bawl.

He barked out a laugh. “Believe me, I find this situation anything but amusing. Painful would be a more apt description.”

That dried her tears. “If you don’t let me go this instant, I will make you very sorry. And I don’t give a damn if you are a bloody duke.” He wouldn’t be the first man she’d kneed in the bollocks, and she didn’t suppose he’d be the last.

“Right now, I don’t give a damn either.” And with that, Leverton hauled Gillian up on her toes and covered her mouth in a fierce, smoldering kiss. 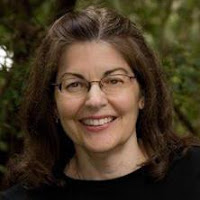