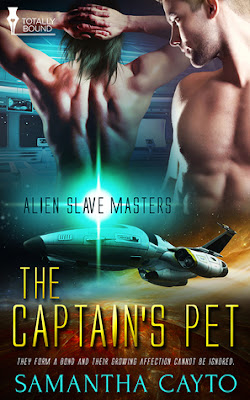 In a not-too-distant future, a lopsided war has led to aliens invading and occupying an Earth settlement. Wid is a young colonist who has been caught harassing the aliens. He and his friends are rounded up and sent to an alien warship patrolling the disputed space. His fate is to serve as a sex slave for the ship’s imposing captain. Wid, at first, fights against his enslavement, but soon learns that not only does he stand no chance against the much larger and stronger captain, he isn’t sure he even wants to.

Like all Travian males, Kell is bound by duty to defend his people. Having risen to the rank of captain, he nevertheless chafes against the boring and endless patrol of the space invaded by the humans. His misses his family and constantly guards against his scheming first officer. He sees his reward of a human sex slave as more of a nuisance. Yet the pretty, fair-haired human’s exotic allure is hard to resist. He finds far more pleasure in the use of his pet than he would like.

Kept naked and leashed, Wid’s days are filled with boredom, while his nights wrapped in Kell’s arms turn from fear into pleasure. Even as the humans plot their escape, Wid and Kell form a bond and their growing affection cannot be ignored. When tensions boil over among the aliens, Wid and his friends may be Kell and his crew’s only chance for survival.

Reader Advisory: This book contains sex scenes of both non-consensual and dubious consent, as well as scenes of violence, abuse and torture. 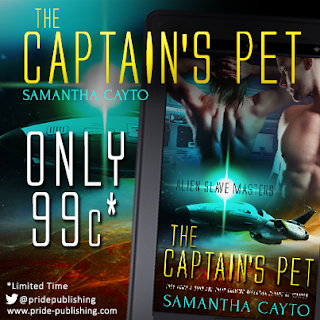 “Do you think they’re going to kill us?”

Wid glanced at the trembling red-headed kid next to him—Stuart. He’d been shoved into the transport next to Wid, after being detained for throwing rotten fruit at a Travian convoy—a prank as stupid as the one Wid had tried to pull. The poor guy was only eighteen and more scared than Wid, if that were possible. In fact, all of the other boys that had been brought were no older than Wid’s twenty years or so, and most couldn’t hide their fear. Thank God there were no girls. Surprisingly the Travians had let the one girl who’d been with them, Joel’s girlfriend, go immediately. His mother had scoffed over the Travians being patriarchal, but right now it seemed like a good thing.

“No,” Wid finally answered. “What would be the point? I mean, if they wanted us dead, why bring us all the way up here?”

He mostly believed what he’d said. It didn’t make sense that they’d be dragged so far when it was easy to blow a laser hole in their foreheads back on the planet. Still, something bad loomed. How could it not? As if in answer to his worst fears, the hangar suddenly filled with a dozen Travians. These males were even more imposing than the security detail that guarded the boys. Each one stood particularly tall, close to seven feet, clad head to toe in red leather. Their shiny black hair fell to their shoulders or below, braided in places to keep it off their harsh faces. He couldn’t lie and say that the Travians were an ugly race, but they were unsettling with their pale skin and completely black eyes.

As the aliens filed in and lined up opposite the boys, Stuart let out a little whimper. Wid spared him a glance.

“Don’t let them think you’re scared,” he advised in a low tone.

“Seriously?” Stuart murmured back. “I am scared.”

Wid suppressed a shudder. “I know, just try not to show it. It’s all we have left.”

One of the guards barked out the order in the guttural language of the Travians. God, he hated being able to understand what they said. Once the occupation had been completed, the aliens had forced every human over the age of five to be implanted with a translation device. The foreign words rattled around his head until they made sense to him. The one word was easy to translate. Longer sentences spoken quickly were harder to get. Not that the Travians were patient when a human struggled to understand.

He shut his mouth, however, his bravado long gone.

The tallest of the males stood a foot in front of the others, staring down the line of human boys. When he got to Wid at the end, his gaze lingered. Wid tried not to squirm under the scrutiny. He felt invaded in the more personal sense of the word by the piercing look. After a few seconds, the male glanced away and gestured to another of them. The tall one said something short and quick that Wid didn’t catch. When the other male stepped forward, he headed straight for Wid. Before Wid could even think of recoiling, the taller alien barked out one word.

The steps of the second male faltered. His expression turned sour for a second before he changed course a fraction to go to Stuart. His hand shot out and he grabbed Stuart by one arm. The male’s eyes took on a feral look as he yanked the boy to his body. Stuart cried out and tried to pull away. The male bared his teeth in what could—in an alternate and ugly reality—be called a grin. Then he turned and dragged a struggling and begging Stuart away.

Silence reigned once they’d cleared the hangar. Wid and the other boys were frozen as they digested what had happened to Stuart and what was going to happen to them. The aliens were quiet too, although that seemed to be more about discipline, waiting for a command. The tallest, who was obviously in charge, gestured to another of them. Once again the boys were perused, and Wid recognized the behavior for what it was—they were shopping, picking out which boy they wanted. He didn’t dare think in terms of what they wanted the boys for.

Desperate humans fled an overcrowded Earth and believed they had found sanctuary on New World Colony 7. The Travians see them as invaders and have become reluctant occupiers of the pesky humans after a short war. When young men taunt and harass them, the Travians find a surprising use for the miscreants—they turn them into the sexual pets of their battleship officers.

Wid, Joel and Stuart are three young men who are among the first to face their fate as slaves. Not all of the Travians are happy with their gifts and the responsibility that having them brings. But there is no way to refuse. Now humans and Travians have to forge uneasy—and, for the humans, frightening—relationships. Some Travians exploit their pets, while others pamper them and find themselves lured surprisingly into love. For their part, the humans are drawn deeper into Travian culture and politics. They may be the last, best, hope for their colony’s freedom.

Books in the Alien Slave Masters series will also be on sale for a limited time. Click on the covers below to visit Pride Publishing's website.

She lives a typical suburban life with her husband, three kids and four dogs. Her children don't understand why they can't read what she writes, but her husband is always willing to lend her a hand—and anything else—when she needs to choreograph a scene.