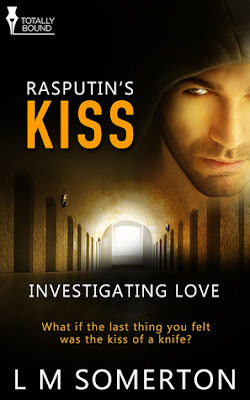 What if the last thing you felt was the kiss of a knife?

Rasputin’s kiss is lethal. He’s a ghost—killing and disappearing into the night. With few leads and four bodies on his conscience, Detective Inspector Alex Courtney and his team are running on empty and it’s only a matter of time before Rasputin strikes again.

When Alex recruits a young detective to play the part of his boyfriend and provide a tempting target for a killer, he knows he is taking a huge risk. He doesn’t expect Conor Trethuan to be a perfect potential submissive. When their mutual attraction becomes more, Alex has to face the conflict between his possessive instincts and the need to push his young lover into danger.

Investigating their feelings has to come second to investigating the case. There’s no time to decide if what they feel for each other is real. With Rasputin closing in, they may not live to find out.

Publisher's Note: This book is best read in sequence as part of a series but can be read as a standalone. 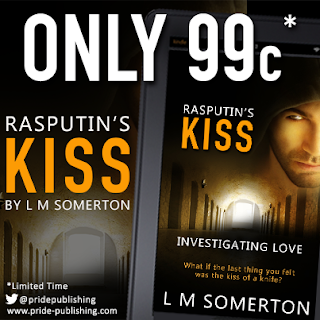 Alex ignored the suspicious glances that flashed between his team members like some kind of semaphore.

“What’s up now then, boss? Don’t tell me… We’ve got some fucking journalist ride-along?” That had come from his veteran sergeant, Higgs.

“Nah. That can’t be it, Sarge. That’s not worth bacon butties. It must be something much worse.” Detective Pete Harris looked thoughtful. “The Chief Inspector is up the duff and the boss is responsible.” That got a few snorts of laughter in response.

“The Chief may come across as holier than thou, Pete, but even she couldn’t manage the Immaculate Conception,” Alex retorted from his perch on the edge of a desk. He let the banter continue for a minute or two then broke in, “Can it, you lot. Even if I were inclined to switch teams, which I’m not, Chief Inspector Mary Sissons would hardly be my first port of call. She’s old enough to be my fucking mother!”

His team dissolved into guffaws of laughter and Alex smiled. “It saddens me deeply that I can’t do something nice for you without aspersions of guilt being cast on my character. I’m deeply hurt.”

The sergeant slurped his coffee. “The last time you bought us breakfast, guv, you told us the overtime budget had been cut. You can’t blame us for being suspicious. Besides, we’re detectives. We’re supposed to read between the lines of every situation and you did say you had a plan.”

Alex gave a wry smile. “Well, that is true. However, this morning has absolutely nothing to do with overtime, I promise. I’ve been doing some thinking…”

That brought another chorus of groans and sarcastic comments.

Alex rolled his eyes. “Yes, it does occasionally happen. Even to senior officers. Anyway, I’ve decided to take a new tack with this investigation. We are going to try something different. We need bait.” He paused to let that sink in.

“What do you mean by bait, exactly?” Phil Cole, the youngest member of his team other than Alex himself fanned his face anxiously then loosened his tie and undid the button at his collar.

“Don’t worry, Phil, your arse is safe. You’re too old and nowhere near pretty enough for our resident psychopath.” Cole looked relieved rather than insulted and chewed on his sandwich. “So if not me, then who?”

Alex steeled himself. “I never thought I’d hear myself saying this to you lot”—he cast an eye over the four men that made up his team—“but I want you to find me a boyfriend.”

Being thrown together in extreme circumstances is not the best foundation for a relationship. Alex and Conor must juggle the demands of their jobs as police detectives with their personal lives. With Alex as demanding in the bedroom as he is at work, will Conor be able to accept that submission is not weakness. Finding out will be the most important investigation of their lives.

Books 2 & 3 in the Investigating Love series will also be on sale for a limited time. Click on the covers below to visit Pride Publishing's website.

L.M. Somerton lives in a small village in the English countryside, surrounded by rolling hills, cows and sheep. She started writing to fill time between jobs and is now firmly and unashamedly addicted.

Posted by CrystalBee at 1:29 PM