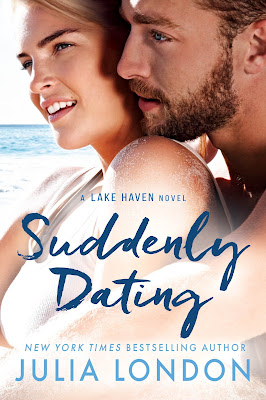 "I really appreciate your willingness to take charge here...but how about you let me worry about clothes and logistics." - Harry Westbrook

If only Lola Dunne had the time—and the courage—she’d write her novel, and maybe even start dating again. When her friend offers the use of her summer home overlooking Lake Haven, Lola sees the chance to focus on herself for a change, and she eagerly accepts.

Engineer Harry Westbrook is waiting for his ship to come in. But it’s not happening soon enough for his girlfriend, who’s left him for good…again. To nurse Harry’s heartache, his pal extends an invite to his lake house in East Beach.

When it turns out that Harry’s and Lola’s friends are a divorcing, not-on-speaking-terms couple sparring over the same house, the strangers find themselves accidental (and reluctant) roommates for the summer. They agree to make the best of it, even posing as a couple to mingle among East Beach’s well-heeled crowd. But the ruse is starting to feel real—and romantic. Are they brave enough to reveal their feelings before the summer nights turn cold?

There are characters that are obviously perfect for each other. And then there are characters that are more like Harry and Lola, characters that are imperfectly perfect. It's obvious to everyone that they were meant for each other, but the way they become a couple makes you shake your head a bit. It's a comedy of errors and I loved every single moment of it. I loved their banter and how they struggled living with each other. The constant rules and the fun they have testing each other's limits. The moment they finally come together and the little rough patches they face afterwards. Everything wasn't perfect for them, but I don't think they'd change one moment in their budding relationship. I loved how real they were. Both Harry and Lola are strong individuals that work hard to accomplish their dreams. Two characters that you just want to see succeed so badly and you want to see them happy that I may have had a happy sigh at the end of the book.

Suddenly Dating may have only been the 2nd book of Julia's that I've read, but I know it will not be my last. I love her characters to pieces. Her writing style is so much fun. She made me giggle at times, I ugly cried along with Lola. And of course I sighed when they expressed their true feelings. At the end of the day, I loved coming into this book after going through a bit of a reading slump because it rejuvenated me. I don't know who the couple will be in the next book. All I know is that I can't wait to fall in love with more of Julia's characters.

Julia London is the New York Times, USA Today, and Publishers Weekly bestselling author of more than thirty romance novels. Her historical titles include the popular Desperate Debutantes series, the Secrets of Hadley Green series, and the Cabot Sisters series; her contemporary works include the Lake Haven, Pine River, and Cedar Springs series. She has won the RT Bookclub Award for Best Historical Romance and has been a six-time finalist for the prestigious RITA Award for excellence in romantic fiction. She lives in Austin, Texas.