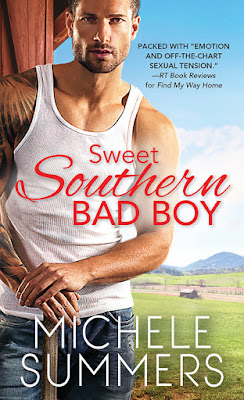 HE’S GOT SOMETHING SHE WANTS

When Katie McKnight gets lost location-scouting for her father’s TV studio, she stumbles upon the perfect setting for their angsty new teen vampire series—a remote barn house unfortunately occupied by a grouchy, disheveled, and incredibly sexy man who instantly mistakes her for the new nanny. Should Katie tell him the truth, or get her foot in the door?

SHE’S GOT EVERYTHING HE NEEDS

Bestselling author Vance Kerner doesn’t just have writer’s block—he’s been run ragged ever since he was saddled with taking care of his brother’s three kids, an adopted kitten, and a runaway mutt. The last thing he needs is a teen drama defiling his property, but with fascinating and unconventional Katie underfoot charming the entire Kerner household, Vance is finding it harder and harder to say no.

“My name is Katie McKnight and I have a proposition for you."

He was shoving his cell phone in his back pocket when he glanced up with a startled expression. “Proposition?” He looked interested, but not in the way Katie wanted. She had a feeling he had something more prurient in mind by the way his dark eyes roved over her, stopping at all her very, very hot points. J-Lo’s bootay. This was not going the way she’d hoped.

Clearly this mostly sexy pirate/rock star/badass guy was in over his head. Time to take charge. Katie extended her right hand. “Katie McKnight. And you are?”

“Vance Kerner. I’m the kids’ uncle.” His big hand engulfed her small palm. And for the briefest second Katie felt connected…to what she had no idea. The feeling felt foreign and even a little frightening. He shook her hand slowly and gave her a piratical grin. Like he could chew her up and spit out her bones in no time flat.

“Is there a Mrs. Kerner?” she asked, needing all the decision-makers to be present and in agreement with her proposal.

“Only my sister-in-law. My mother died fifteen years ago,” he said in a matter-of-fact tone, but something flickered behind his dark eyes.

“Oh, well, then I’m sorry, er, about your loss. Um, Mr. Kerner, I’d like to talk to you about using your house to film a miniseries.”

“Excuse me?” His dark eyes narrowed, sending a fissure of alarm down her back. This had to be karma or the perfect storm, because not only did he own the ideal house, but he could star in the horror series about disappearing teenagers in love.

“Yes, I’m from Santa Monica and I’m a location scout for McKnight Studios, and I’d like––”

He gave his thick black watch an irritated glance. “You’re not from the agency and you’re not a nanny.” He started buttoning his shirt in agitation. Disappointment washed over her; she hated seeing his glorious chest disappear behind clothing. She had no business dreaming about his chest or any other part of his anatomy. But she was female and at the moment everything female about her liked everything male about him. Think business, Katie. Not body.

“If you could give me five minutes of your time, I’ll be happy to explain and––”

“Look, Kat, I don’t have five minutes.” He started to dial his cell. Katie listened as he barked at some person at the nanny agency. From the gist of the conversation, she gathered no nanny was coming today and Mr. Kerner was not happy.

“Dammit. I can’t believe this bullshit,” he muttered, texting as he cursed. “Listen, I hate to cut this visit short, but I need to pack up Larry, Curly, and Moe, who are probably playing in the toilet this very minute, and rush to my meeting,” he said, shoving papers and folders into a brown leather satchel.

Katie’s timing sucked…again. He was in no mood to hear her offer and once he left, she wasn’t sure he’d let her back in again. This called for some quick thinking and a solution he couldn’t refuse.

“Uh, excuse me? Mr. Kerner, I understand that you’ve got somewhere very important to be and um…I don’t. So, I’d be happy to babysit your nephews while you attend your meeting,” she offered, hoping this would buy her some time and maybe win him over.

He looked up with startled eyes as he slipped his foot into a brown leather loafer.

“What’d you say you did again?”

“I’m a location scout, but I have experience with children. I majored in elementary education at UC Berkeley. He hesitated, warring with needing to go and being a responsible uncle. “I assure you, I’m normal as baseball, apple pie, and Chevrolet and the kids will be perfectly safe.” She reached inside her handbag and fished for her business cards. “Here. That’s all my information and my cell number. You can call the studio if you want to check.”

He took the card and read it. “Thanks,” he said, slipping it in his back pocket.

“Now, if you’ll give me your information, you can get to your meeting and I’ll tend to the kids.” Vance got busy scribbling his information on a piece of scrap paper. “I’m actually pretty good with kids,” she said, smiling, hoping to reassure him (and herself) as he handed her the piece of paper. “You, on the other hand, have the handwriting of a psychopath,” she murmured, trying to make out his chicken scratch. “Is that a five or an eight?”

He chuckled. “Eight. Sorry. I’m a writer, but I do it all on the computer. Penmanship was never a strong suit. Are you sure you want to do this? I won’t be long, and I’ll pay you when I get back.”

“That won’t be necessary. All I want in return is fifteen minutes of your undivided attention.” And the use of your house for the next eight months. She’d get to that later. Katie picked up his satchel and handed it to him, escorting him to the door, acting as if she owned the place. “Now, make that meeting and don’t forget to come home,” she half-teased but actually meant it.

“Call me if you need anything. Danny sometimes eats the dog food and drops the kitten in the toilet, so you might want to watch out for that.” Katie’s face must’ve registered shock. “Not to worry. No one has gotten sick and the kitten hasn’t drowned…yet. Thanks again. You’re a life saver.” And before she could react, Pirate Man cupped the back of her neck and pulled her in for a quick, hard kiss. Katie’s knees almost buckled and her mind went blank. This must be what it felt like to be kissed senseless before walking the plank. 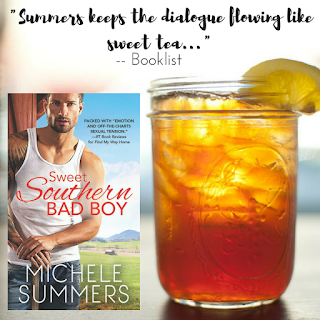 Michele Summers writes about small-town life with a Southern flair, and has her own interior design business in Raleigh, North Carolina, and Miami, Florida. Both professions feed her creative appetite and provide a daily dose of humor.