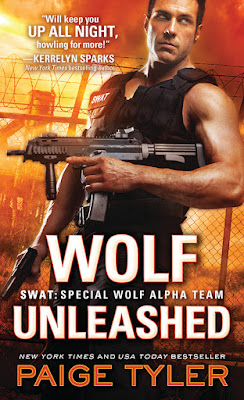 SHE BRINGS OUT THE WOLF IN HIM

Lacey Barton can’t deny her crazy attraction to Alex Trevino, but that doesn’t mean she has time for the gorgeous SWAT officer. She’s hell-bent on discovering who’s behind the brutal dogfights sending countless mauled animals to her veterinarian office. The trail leads Lacey to a ring of vicious drug dealers and suddenly she’s in way over her head—right smack in the middle of a SWAT stakeout.

With Lacey in danger, Alex’s wolf side is unleashed. But when she witnesses Alex shift, she’s even more terrified… Now it’s up to Alex to crack the case—and earn back Lacey’s trust and, ultimately, her heart.

Dr. Barton was bent over rummaging through a bottom drawer of the built-ins on the far wall. Even though Alex did his best not to stare, it was impossible not to notice that she had an incredibly spectacular ass. He’d always been a leg man, but one look at her derrière and he suddenly decided he’d been missing out.

Then she stood up, turned around, and flipped her long, wavy blond hair over her shoulder, and he realized that the rest of her was equally stunning. While her baggy white lab coat hid a lot, he could still tell that she had an athletic build and some really nice curves. It was her face that made his heart beat faster, though. She had the most captivating pair of blue eyes he’d ever seen and full red lips just begging to be kissed. From this moment forward, whenever he pictured an angel, he would think of the beautiful Dr. Barton.

Alex smiled, and when she smiled back, he heard her heart thudding a little quicker. But then she looked down at Tuffie, and her entire expression changed. Hurrying over, she dropped down to one knee beside Tuffie, gently examining her ears and face.

She gave Alex an angry glare. “Please tell me you arrested the people who put this beautiful girl in a dogfighting ring. Even better—tell me you shot them.”

If Alex had thought her heart was beating fast before, it was nothing compared to the way it was thumping now. Clearly, Dr. Barton was very passionate about protecting dogs. In his book, that made her even more beautiful than she already was.

“I wish I could, but unfortunately, we never found the people who did it,” Alex said. “We rescued Tuffie when her owner was killed. He died trying to protect her from a psychopath armed with a rifle.”

Dr. Barton’s gaze went back to Tuffie, her expression turning from anger to sadness as she ran her fingers down the fresh scars along the dog’s chest and side. “Looks like she got shot anyway.”

“Yeah. It’s a miracle she lived long enough for my teammate and me to get her here in time for Doc Jones to save her. Thank God for sirens. I think we ran every red light in town.”

The veterinarian straightened, gracing him with another dazzling grin, and Alex felt his knees go a little loose. Damn, what a smile.

“I knew there was something I liked about you the second you walked in.”

Alex felt his face flush. “It wasn’t a big deal. I’m a cop. Saving people—and dogs—comes with the job description.” He cringed the moment the words left his mouth. Had he really just said something that lame?

Thankfully, the beautiful Dr. Barton didn’t seem to notice the cheesy line. Or if she had, she was too polite to laugh at him.

“And is bringing Tuffie to her appointments also in your job description?” she asked, her eyes twinkling.

Was her heart beating even faster than before? Unless it was his own heart pounding in his ears. That was a definite possibility. Because it seemed like he had a real thing for Dr. Barton.

He smiled. “It is if the rest of the SWAT team and I adopted her and gave her a new home.”

Alex knew it was a shameless grab to get further into the doctor’s good graces, but he couldn’t seem to stop himself.

“Not only did you save her life, but you adopted her too? I think Tuffie hit the lottery with you, Officer…?”

“Trevino,” he said, filling in the blank and offering his hand. “But please, call me Alex.”

She took his hand and gave it a shake. “Nice to meet you, Alex. I’m Lacey Barton.”

Her hand was small in comparison to his, her skin soft and warm, and Alex found himself holding on a bit longer than was customary. Lacey didn’t seem to mind. In fact, she appeared just as reluctant to let go as he did.

She pushed her hair behind her ear and cleared her throat. “I guess we ought to get on with Tuffie’s checkup. So you can get back to saving the world and everything.”

Reaching down, Alex gently picked up Tuffie and set her on the stainless steel exam table.

Alex felt the compliment go right to his head. “Thanks.”

“Actually, I was talking about Tuffie,” Lacey said as she tenderly ran her hands over the dog’s shoulders.

She looked up at him from beneath her lashes. “But yours is pretty good too.”

Alex chuckled. Damn, this woman was good. He had her by a foot in height and more than a hundred pounds in weight, yet she was playing him like a fiddle, and he didn’t mind one bit. He couldn’t remember ever having such an immediate and intense reaction to any woman he’d ever met. Suddenly, he wanted to know everything there was to know about her—and then some.

Lacey was more than accommodating, telling him about how she’d recently gotten a job here after working several years at a place on the west side of Dallas closer to Arlington.

“I loved it there, but this place is closer to my apartment,” she told him as she continued to examine Tuffie. “I’ve cut my commute time by about an hour and a half each way, so it’s like getting a whole extra day off to do stuff I want to do instead of sitting in traffic.”

“And what do you like to do with all this extra time?” he asked.

Lacey leaned over to read something in Tuffie’s medical records. Alex tensed, worried she’d found something wrong, but after a moment, she merely nodded to herself, then went back to checking Tuffie. “I do a lot of volunteer work at one of the nearby animal shelters,” she said. “I’m also on call to help out both Animal Services and the DPD Animal Cruelty Squad when they run into injured dogs.”

Whoa. A woman who spent her days taking care of dogs for a living, then did it during her spare time for free? That was definitely a woman Alex could appreciate.

“It’s pretty amazing that you give so much of your time to animal causes,” he said. “Getting called out at all hours of the day and night must be tough on your boyfriend, though.”

Lacey urged Tuffie over on her back, pressing carefully along one of the long scars that ran all the way from the base of her rib cage to the middle of her cute pink tummy.

“I don’t have a boyfriend right now,” she said, the corners of her mouth turning up. “My life is a little too busy for that at the moment.”

Bingo! Alex had already noticed she wasn’t wearing a ring. Now he knew she wasn’t seeing anyone. Could this get any better?

In Wolf Unleashed, the fifth installment in Paige Tyler’s sexy and suspenseful SWAT series, Lacey, the heroine, sees a side of the hero, Alex, that she really did not expect. Namely, his wolf side!

We asked Paige Tyler about other fantastic stories that portray a character seeing another in a new light. What are her favorites?

Buttercup from Princess Bride. Buttercup hates Dread Pirate Roberts. She believes that he killed her one true love, Westley. But of course, DPR is in fact Westley, as Buttercup learns after the most famous of all movie lines…As you wish.

Paige Tyler is a New York Times and USA Today bestselling author of sexy, romantic fiction. Paige writes books about hunky alpha males and the kick-butt heroines they fall in love with. She lives with her very own military hero (a.k.a. her husband) and their adorable dog on the beautiful Florida coast.