Spotlight: The Soul of a SEAL (West Coast Navy SEALs #4) by Anne Elizabeth 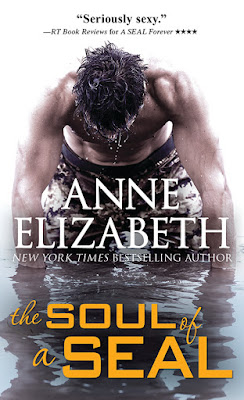 Love may be the toughest battle of all...

When scientists on Dr. Warren’s super-secret space mission start dying, Navy SEAL Captain Sheraton is sent in as an astronaut candidate with a hidden agenda—find the person sabotaging the program.

Bennett’s mouth dropped open. The place had been hit. Cushions, pillows, and even the mattresses had been slashed. Stuffing spilled out on the floor, and there were broken computer parts littered all around the room. “Not what I would call ‘preserving the scene,’” Bennett said.

“Nope,” said Melo. His usual upbeat demeanor was sullen as he moved methodically around the room, checking places he might stash information. “I’m not finding anything. Are you?”

Having moved into the middle of the room, Bennett’s eyes scanned the whole place. “Something’s missing. What’s missing, Jonah?”

“Besides their cell phones and weapons?”

Bennett nodded. “They both preferred the tiny stickers, not the big Ka-Bars our Frogmen fathers used. If those items aren’t here and weren’t on the bodies, then…”

“The killer has them,” finished Melo.

“Let’s write a program to scan for weapons and to turn those phones on. Those are good trophies too.”

“I’m on it, but it will take me some time. I do a lot of it in my head.” Melo tapped his temple with his finger. “By tonight, I’ll have something for you.”

“Good. We have a date to keep. Don’t want to keep Dr. Warren waiting.” Bennett stepped out of the room and closed the door behind his Teammate. He hated thinking about the position they were in. Being in the dark about who the enemy was could be very dangerous.

Research the terminology. There’s nothing worse than someone saying they visited the “can” when the Navy calls it “the head” – unless you are being ironic, of course.

Anne Elizabeth is a romance author, comic creator, and a monthly columnist for RT Book Reviews magazine. With a BS in Business and MS in Communications from Boston University, she is a regular presenter at conventions as well as a member of The Author’s Guild and Romance Writers of America. Anne lives with her husband, a retired Navy SEAL, in the mountains above San Diego. Visit her website at www.AnneElizabeth.net. 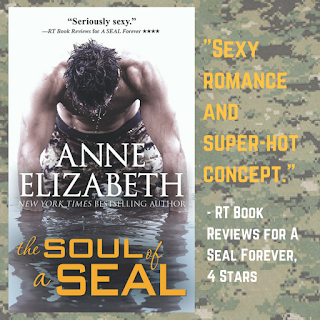