Spotlight: This Is Our Song (The Shaughnessy Brothers #4) by Samantha Chase 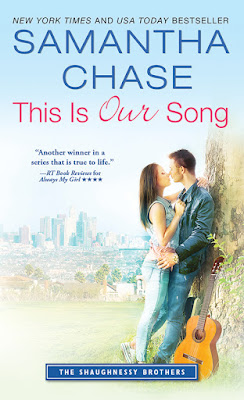 This Is Our Song
The Shaughnessy Brothers #4
Samantha Chase
Sourcebooks Casablanca
December 6, 2016

She knows him by reputation...

Riley Shaughnessy knew that to stand out in his large family, he'd have to go big. Making a name for himself as a musician wasn’t easy, but he followed his dreams to rock-star success. But the relentless expectations of fans is not helping the slump he's in now. So of course the person who attracts him is the woman who is not impressed by fame.

Which gives Riley Shaughnessy a lot to prove.

Entertainment reporter Savannah Daly is completely unfazed by pretty-boy rock stars. She’s just here to get her interview and write her story. But spending an entire month with the Shaughnessys is going to show Savannah a side of Riley she never could have guessed.

A message from Samantha Chase...

I’m one of those people who can multi-task.  To a point.  I do like almost complete silence while I write with the exception of my Sounds of the Ocean soundtrack playing.  I can have twenty tabs open online and be on social media while I’m writing, but please don’t make me listen to anything!  But amazingly enough, on most of my books I do end up with a playlist that helps me get the job done.

I just don’t listen to it while I’m writing.

I turn to it when I’m blocked – when I’m stuck in a scene and need to get hyper-focused on my characters.  This is Our Song was kind of easy to have a playlist to because Riley is a musician. There were songs that I felt like I could imagine him singing or that the lyrics really applied to him.

Not a Bad Thing by Justin Timberlake:
Um…Justin Timberlake.  Need I say more?  Okay, maybe I do.  When Savannah meets Riley, she’s pretty biased – she doesn’t like him.  She doesn’t like his music.  So of course she’s going to fight any kind of attraction to him on principle.  But our boy Riley can be pretty convincing and good ol’ JT gave me some good insight for this kind of situation.

Favorite line:  Don't you know that I could be that guy to heal it over time
And I won't stop until you believe it
'Cause baby you're worth it

I was lucky with This is Our Song because of Riley’s career.  Some books it will just be a single (as in one) song that is on my playlist to help me over the humps.  And sometimes I’ll have to listen to that song like five times in a row to get me in the proper mindset to write what I need to write.

Happy listening and I hope you enjoy This is Our Song!!

He didn’t just beat her in the best of three.

Oh, no. That would have been too easy.

No, Savannah—who realized too late that she was a very sore loser—kept egging him on until he finally put the paddle down after beating her in twelve games. Twelve! Why did she have to keep taunting him? Even while they were playing she couldn’t make herself ask him anything important. They talked about useless stuff—favorite bands, favorite foods—hell, at one point she’d even asked him his favorite color.

She hung her head low in defeat and put her paddle on the table. Riley had excused himself and went to get them each a drink. She prayed it was vodka. Something to make her forget this humiliation.

His prize at the end of the first three games was that she’d stay and have dinner with him.

After the next three she’d stay for a movie.

She really thought she was going to beat him in the third round. Unfortunately, it had been her biggest loss, and he’d simply chuckled and said he’d have to think about his reward. And he’d repeated that after the fourth and final win.

Riley cleared his throat when he walked back into the room and handed her a glass of ice water. They drank in silence for a few minutes. “That was fun,” he finally said, and Savannah realized he wasn’t being obnoxious and he wasn’t gloating. He genuinely looked like he’d had a good time.

And despite all the losing, Savannah would have to agree. It was fun.

“How do you feel about salmon for dinner?”

“It’s one of my favorites,” she said and was relieved he wasn’t gloating.

“It’s kind of early yet. Maybe we can watch a movie first?”

That was a reasonable request, and she agreed. Together they picked out a classic Neil Simon movie from 1967, Barefoot in the Park. “Ooo…Robert Redford.” She sighed. “Another favorite.”

Tucked away in a corner was one of the biggest flat-screen TVs Savannah had ever seen. Riley noticed her stunned look. “It’s one hundred ten inches. They don’t come any bigger than this right now. The picture’s great too.”

Two oversized recliners were centered in front of the screen and they each sat down. Riley started the movie and within minutes Savannah was more relaxed and they were both laughing along with the story.

She kicked her sandals off and tucked her feet up on the chair beside her. Next she pulled the clip out of her hair so she could relax her head against the back of the comfortable chair. Looking to her right, she saw Riley was watching her. His expression was intense and for the life of her, she couldn’t figure out what was wrong. “Is everything okay?”

He didn’t answer right away.

“I still have to decide what I get for winning those last two rounds,” he said, his voice low and gravelly.

Savannah nodded, hypnotized by the way his eyes had gone so dark.

“I’m going to combine them into one request,” he said, and it sounded more like a warning than a statement.

“Okay.” Her own voice was almost a breathy whisper.

Leaning closer, Riley’s eyes zeroed in on her lips before meeting her eyes. “Savannah?”

His hand snaked out and around her nape and slowly drew her closer to him. And then his lips touched hers and Savannah’s brain simply stopped functioning.

New York Times and USA Today Bestseller Samantha Chase released her debut novel, Jordan's Return, in November 2011. Teaching creative writing to students from elementary through high school motivated Samantha to take that step as well. Since then, she has become a NYT and USA  Today bestselling author. She lives with her husband of 25 years and their two sons in North Carolina. 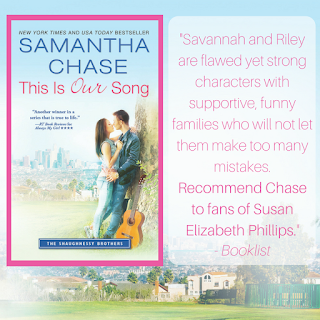