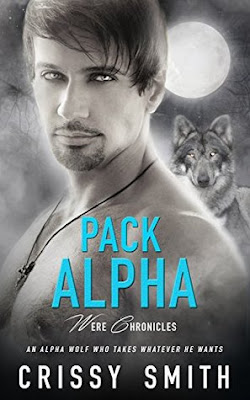 Marissa Boyd finds herself drawn into a world she can never be a part of, complete with an Alpha wolf who takes whatever he wants. And he wants her.

Marissa Boyd knows, as a non-shifter, she doesn’t belong in Pack territory. She braves a visit to attend her sister’s mating ceremony and meets the shifter who will change her entire life and beliefs.

Gage Wolf knows Marissa is hiding a pained past. As Alpha, he’s used to protecting his Pack. Marissa challenges his authority like no one he’s ever met before. His desire to claim her is strong and his wolf won’t be denied. He’ll have her as his mate even if he has to fight to teach her the meaning of belonging to an Alpha. Even if it is Marissa’s feelings of not being good enough for him that he must battle. 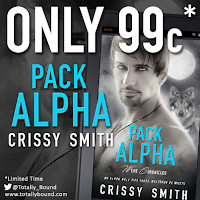 “Here we go,” Marissa muttered then tore open the back of the envelope. She pulled out the heavy card and flipped it over.

We cordially invite you…

Marissa stared at the printed words. She was doing it—finally, Elizabeth was taking a mate. When Elizabeth had moved to Texas it was because she’d met Greg. Greg was also a teacher and they both worked at a local elementary school and had been dating for several years. Marissa had known that this day would come, but she still had several emotions running through her.

She was jealous and that wasn’t fair to her sister. Marissa was also happy for Elizabeth and hoped she would be able to show that.

In the ten years that they’d been separated from each other, Marissa had encouraged Elizabeth to follow her dreams, whether with her career or when she’d met Greg. Elizabeth needed to go for what she wanted, and it seemed she was finally getting what she wanted.

Just because Marissa would never have the life she craved didn’t mean that she wanted Elizabeth to suffer any longer. For as long as she could remember, Elizabeth was always paying for Marissa’s sins. Luckily Elizabeth had gotten away from the Pack they had been born into. Once Marissa had left, it’d opened the door to Elizabeth being accepted into another Pack.

Inside the invitation was a folded up piece of paper. Marissa opened it to find a handwritten note.

I know this won’t be easy for you but I need you here with me to celebrate the ceremony. I won’t do this without you. I know I’m asking a lot but I hope you can spend a few days with me to help me prepare and be with me when I say my vows to Greg. Don’t say no. Please come.

With all my love,
Elizabeth

Well shit, how could she say no to the only thing Elizabeth had ever asked for?

She jumped when Chad joined her by the window. Marissa dropped her hands but didn’t let go of the letter or the invitation.

Chad nodded to her hands. “Bad news?” He’d dressed and had even put on his shoes. She guessed this was the end of their fun. Oh well, she really wasn’t in the mood any longer and she had some thinking to do. Instead of answering him she only shrugged.

Then he surprised her by leaning forward and kissing her forehead. She wasn’t used to such an intimate gesture. She closed her eyes for a moment to hold in the warm feeling.

“I would like to see you again,” he said. “I left my number on your counter. I hope you’ll call me.”

She nodded, really not sure how else to respond. Maybe it wouldn’t be too bad to date a human. She stayed away from relationships because she craved a shifter but had to settle for a human. It was better to just have one-night stands than not be able to give her partner one hundred percent of herself. Or that was what she’d always believed. Perhaps she needed to change her way of thinking. At least she wouldn’t be alone anymore.

Marissa watched as he walked away. Damn, the man really did have a nice ass. Too bad they’d gotten interrupted. With a sigh she turned back to the window. Using her heightened sight she could see the waves crashing against the sand on the shore. It was peaceful but her thoughts weren’t. She had to start making plans to go to Texas next month.

Hot Alpha males and feisty females set the pages on fire as they clash and struggle to belong and find that one special mate.

Shape-shifters who cannot shift, attacks on packs, coming out to the world, The Were Chronicles will take you through the lives of Pack members who fight for who and what they want.

Nothing is more sacred then the one person who completes them.

Through betrayals and lies these strong willed females and fully dominant males must find a way to protect what's really important. Love.

Book 2 will also be on sale.
Click on the cover below to find it on Totally Bound.

Crissy Smith lives in Texas with her husband, daughter, and three Labrador retrievers. The three dogs love to curl up under her computer desk and nap while she writes. It doesn't leave a lot of room for her but what's a woman to do?

When not writing or reading, she enjoys hunting, camping and shooting. But she has a girly side too and is addicted to pedicures and coffee.

She has been writing since she was a teenager and still loves everything to do with the paranormal. Her stories and characters all have a place in her heart. She loves the alpha male, the dominant werewolf, or the Master vampire which find their way in most of her books.

Learn more about the characters she has created at her website where they have their very own page. It will be updated from time to time to let you know what's going on with them. Also you can find out who will be in the next book.