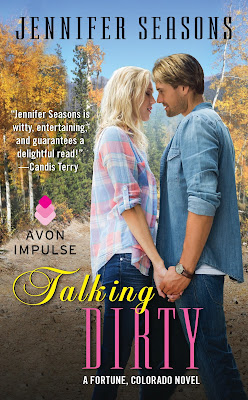 Jake Stone has always been an outsider, even in his hometown. As the misfit son of the town drunk and a descendant of Fortune’s mysterious founders, he’s spent his whole life not living up to expectations. So when Apple Woodman comes poking her pert little nose around his business, trying to sniff out juicy bits for a book she’s writing on the town’s history, he decides he’s had enough. He’ll give her the answers, at a price: one piece of clothing for every question. If the town’s good girl librarian wants the dirt on this bad boy then she’s going to have to bare all to get it.

Nothing is going to stop Apple from achieving her dream of being a published author, not even surly Jake Stone. She’s got a hefty advance to make good on and a looming deadline, and the last bit of crucial information she needs is being held hostage by the infuriating man. But Apple believes in equality between the sexes and she’s not going to be the only one playing along—he’s going to have to take it all off too. They’re only clothes; it’s not like they’re baring their hearts. Right?

“You know what your problem is?”

Apple Woodman smiled victoriously; glad she’d finally gotten close enough to Jake Stone for him to hear her from across the short stretch of sidewalk separating them in downtown Fortune, Colorado. Shuffling the bag of produce she’d just purchased from the local Co-op, she settled the fabric straps on her shoulder and frowned at his broad, muscular back.  Not that she was noticing that it was muscular or anything.  “You’re not a nice person.”

There, she’d finally said it.  That had been floating around inside her for weeks.

Wow, she felt so much better.

“That hurts my feelings.”  The man turned around and had the gall to say with a blatantly fake hurt-puppy expression on his handsome face.

“You know, if it weren’t against everything I’ve been taught about how a person treated others, I’d kick you in the shins so hard right now.”  Annoyance flooded Apple.  Most of it was directed at the most aggravating male in the entire known universe.  The man had mad skills when it came to driving women crazy.

She should know.  Jake Stone had been under her skin and scrambling her brains since before the last ice age.  Once, just once, she’d like to have all her mental faculties fully functioning in his presence long enough to tell him exactly what she’d thought of him since kindergarten.

Or well, mostly everything.

No way would she ever admit that another tiny little part of her was also currently annoyed at herself for considering him “handsome”.  She should be so over that about him by now.

Turning her attention back to his tall, broad-shouldered form, Apple scrunched her nose against the sun and shaded her eyes with a hand just in time to see the unrighteous gleam in his eye as he taunted her. “I dare you to even try that, woman.  Here, I’ll hold a shin up for you to kick.”  He raised a jean-clad leg and waggled it slowly at her.  She could only scowl at him because she was stuck somewhere between flabbergasted and infuriated, instead of making some fabulously pithy comeback like she’d prefer.  Jake must have taken that as a sign of defeat because a low rumble of humor came from him and he smirked, dropping his leg back down.  “You couldn’t hurt a hornet if it stung you on your ass, sweetheart.”

“You don’t know that.”  Apple instantly defended, frowning at him.  She conveniently ignored the fact that he’d called her “sweetheart” and the responding quiver that had darted through her lower abdomen.

Back to the point: simply because they’d known each other since forever didn’t mean he actually knew her.  Not one single bit.   If there’d been a time that she might have wished differently, that time was long past.  Like, ancient as the Indus Valley past.

There was only one thing she wanted from him now—and it was purely business.  One hundred percent.  So on the up-and-up platonic end of things that it was beyond vanilla.

And the damned man wasn’t cooperating.  Hadn’t even budged.

Which was ridiculous.  It was vanilla, for crissake.   Totally harmless.  Who would be afraid of harmless?

Jake raked a hand through his hair recently cut hair and sighed, his brown eyes oddly dark and restless on her before they slid away.  “You’re wrong there, Apple.”  His gruff voice held an edge she didn’t understand any more than that look he’d just given her.

“Nice haircut, by the way.”  She retorted because it was the only thing she could come up with.  Lame, but what else could she expect?  He had a way of reducing her to juvenile, brainless behavior.

“You like it?”  He shot her a grin and winked, his eyes dancing with sudden humor.  Angsty one minute, amused the next.  She swore the man’s moods shifted faster than the Colorado weather. “Thought it was time for a change.”

Apple couldn’t help it.  She snorted.  Right out loud on Main Street with pedestrians strolling by. “Hah! Since when do you do change?”  He might not know her as well as she once might have wished he did, but she for sure knew him.  He hated change. It was like a dirty word to him. Simply look at the women he dated.  They were all exactly the same—and had been since his first girlfriend, Scarlet Floozy from way back in junior high school (Not her actual name, sadly.).

That thought had her frown deepening.  Why couldn’t he just do what she wanted so she could stop harassing him?  Stalking wasn’t her most flattering behavior.  But darn it, the blasted man had reduced her to it.

Jake braced his long, heavily muscled legs apart and crossed his arms, his biceps flexing in a rather flattering, masculine way—she supposed.  She’d barely noticed.  Her eyes were firmly glued to where the ponytail he’d worn for the past twenty years had been.   Now his sun-bleached light brown hair was a lush, tousled mass that stopped just short of his collar.  She had to admit that it was a little shocking to see him with the short hair.  If she’d thought his features rugged before, the new haircut made them even more so.

His brown eyes were locked on her, his expression unreadable.  “You’d be surprised by what I can do, Apple.  You’ve always underestimated me.” 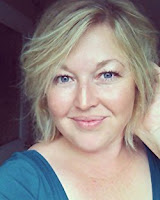 Jennifer Seasons has been a lifelong writer and reader. She lives with her husband and four children in the mountains of rural New England. An enormous, yet lovable dog and the world’s coolest cat keeps them company. When she’s not writing, she loves spending time with her family outdoors exploring her beautiful new home state, learning the joys of organic gardening-and if she’s lucky, relaxing in her hammock under the trees with a really good book. You can find her online at Facebook.