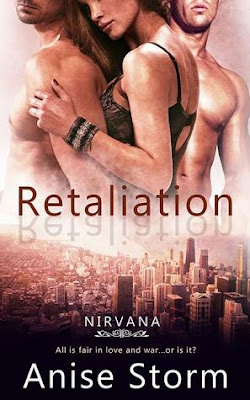 "Hannah isn't just any woman. She's my woman. I just need to figure out where she ran off to this time." - Thaddeus Remington

Secrets are exposed when two business rivals discover they have fallen for the same woman. All’s fair in love and war…or is it?

When past and present collide, Hannah Brinkley is torn in two romantic directions. By the time she realizes she isn’t the only thing at the center of the power struggle between two Dominants, accusations of corporate espionage threaten to rip her world apart. The possibility of prosecution is nothing compared to the realization that she’s lost the two loves of her life. Grappling with the emotional pain, she has nothing left to lose and sets out to clear both her name and her conscience.

Stung by a woman’s alleged betrayal, Finley Wetherall and Thaddeus Remington are determined to destroy one another, until they discover Hannah has put herself in grave danger. Now the two Dominants are in a race against time to determine whether they can actually put their own differences aside long enough to save her. If she’s rescued, will either man be able to walk away from her again? And, if not, will she be able to choose one over the other?

Have you ever read a book and immediately thought to yourself, "Well, that did not end like I thought it would."? That was my initial reaction towards Retaliation, the 3rd novella in the Nirvana series by Anise Storm. I was fully in Thaddeus' corner from the get-go. He was so darn sexy in the first book that I was glued to his side. No man named Finley could sway me. Then came the 2nd book and, while I did sway a bit, I was still Team Thaddeus. Then comes Retaliation and hot damn! Every novella in this series complimented each other. Each obviously built upon the overall story, but it was more than that. They each told a different side and, as the final installment, Retaliation tied everything up with a pretty bow. I loved that Anise expanded on the length a bit to dive into the ramifications of Hannah's actions and indecisiveness. On the other hand, the ending did feel a bit rushed. I would have loved a couple more chapters to explain things a bit more and to explore the futures of Hannah, Thaddeus, and Finley. Overall, I loved Retaliation. I felt it was a fabulous conclusion to the series. Another fun and sexy book from my new favorite erotic romance author!

“Ladies and gentlemen, the captain has turned off the ’fasten seat belt’ sign, and you may now move around the cabin. However, we always recommend you keep your seat belt fastened while you’re seated. In a few moments, the flight attendants will be passing through the cabin to offer you hot or cold drinks and a snack. Alcoholic beverages are available at a nominal charge. Also, we will be showing you our video presentation. Now, sit back, relax and enjoy the flight. Thank you.”

Enjoy the flight? Not likely. It would be a long one and that the best thing to do would be to sleep, but she was still too emotionally wound up to do so. It was also better to wait on the flight attendant, so if she was actually able to succeed in dozing off, she wouldn’t be woken up. Luckily, her seat was located toward the front of the plane.

“Would you like any refreshments, miss? Water? Coffee? Soda?” the young woman asked as she stopped her rolling cart.

Hannah’s first thought was to say no, but then she decided maybe something strong would help her relax for the duration of the flight. “I’ll take a Jack and Coke,” Hannah told her, then grabbed her purse from near her feet. She fished around in it for her ID and credit card, finally handing them to the flight attendant. She wasn’t much of a drinker most days, but her current mood called for something stronger than coffee or soda.
Once her purchase was complete, the attendant handed her a glass of ice, a shot bottle of Jack Daniel’s and a can of Coca-Cola. Hannah removed the top then swallowed the liquor in the small bottle before setting it inside the pouch on the seat in front of her. With any luck, the alcohol would put her to sleep, because when she got back to London, she would have to make some decisions.