Release Day Review: Hooked on Trouble (Over the Top #3) by Kelly Siskind 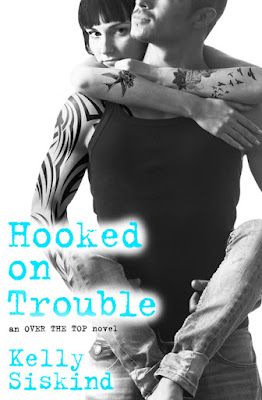 "If that's what you can do with our clothes on, I'm dying to know what happens when the beast is unleashed." - Raven Hunt

The last time Raven did “real” was sixteen months ago, when she spent one unforgettable night with the tattooed, impossible sexy Nico, and then he disappeared the next day.  Since then, she’s kept her guard up and her feelings to herself.  She doesn’t have time for relationship drama when she’s busy searching for her long lost sister.

Nico hasn’t stopped thinking about Raven—her sultry curves, inked skin, or the fact that he ditched her after their night together.  Now that they’re living in the same city, he knows this is his chance to make things right.  What better way to prove to Raven he’s for real than helping her find her sister?  But when the lines between right and wrong start to blur, putting his job on the line, Nico has to decide if the risk is worth the ultimate reward.

Oh, my god. Finally! Nico and Raven's story is here! And after a very embarrassing happy dance (which may or may not have occurred in front of a window), I immediately hunkered down and devoured this bad boy in a couple hours. We're talking up until the wee hours of the morning because I could not put it down. I adore this series, so I was a bit hesitant to start Hooked on Trouble for two reasons. The most obvious is that I really did not want it to end, but also because I was a little afraid that it would fall short of the build-up that readers went through. I'd have to say, Kelly did not disappoint. Hooked on Trouble was just as amazing as the previous books in her Over the Top series. I could happily read 3 more books if it meant spending more time with this wonderful group of friends. Out of the 3 couples, I'd have to say it was Nico and Raven that had the best sexual tension. It was simmering and brewing ever since the first book, only to ignite in the sexiest way ever. There's a little bit of everything in this book. There's the sex appeal that'll melt your Kindle, the laughter that only the closest friends can share, and raw emotions that only the strongest relationships can survive. Things do not come easily for Nico and Raven, but it is their tenaciousness and single-minded determination that pulls them through (and pulls their heads out of the sand when things go haywire). Kelly's writing is phenomenal. Her words flow effortlessly, which makes her books such a pleasure to read. She sucks you in from the first page and keeps you enraptured until the very end. As sad as I am that this series is over, I'm beyond excited that I found a new favorite author and now I get to look forward to what she has in store for her readers in the future.

A small-town girl at heart, Kelly Siskind moved from the city to open a cheese shop with her husband in Northern Ontario, Canada.  When she’s not neck deep in cheese or out hiking, you can find her, notepad in hand, scribbling down one of the many plot bunnies bouncing around in her head.

She laughs at her own jokes and has been known to eat her feelings—Gummy Bears heal all.  She’s also an incurable romantic, devouring romance novels into the wee hours of the morning.

Enter to win 1 of 15 free ebook downloads of Hooked on Trouble!