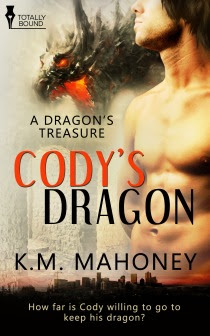 How far is Cody willing to go to keep his dragon?

Kirit is lonely and he’s sick of coming home from the king’s assignments to a cold, empty cave. After searching for years for a mate, Kirit decides it’s time to try a new approach. Against the advice of all his friends, he heads for the human side of the world. There he finds Cody, and the man is everything he could ever want. It takes a little bit of persuasion, but he manages to talk Cody into coming back with him to Faerie.

Within a week of arriving, Cody is beginning to rethink his impulsive decision. He’s trekked across more terrain than he would care to remember, been summoned to meet a king, and flown on a dragon—not an experience he’s willing to repeat anytime soon. Kirit’s growly possessiveness is starting to wear on his nerves, and the unexpected hostility he encounters at the palace is almost enough to make him give up.

But Cody is stubborn. He may not be willing to admit it out loud, but Kirit has got under his skin. He may even, shockingly enough, love the big guy.

Now Cody has to decide what he’s willing to do to keep the man of his dreams. 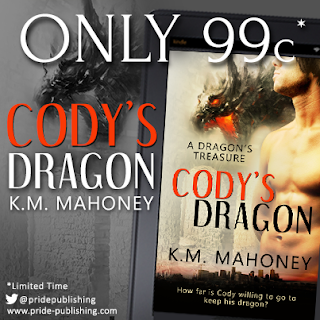 “I’m on a mate hunt.”
“Good for you.”
“In this realm.”
Harper choked, spraying his last mouthful of beer across the room. The distance was impressive—Kirit had to sidestep to avoid being hit.
“Sorry,” Harper said. “I think my hearing’s going.”
“Your hearing is fine. It’s the rest of you that’s…going.”
“Yeah, yeah. Tell me something I don’t know. But you’re going right alongside me. A mate? On this side? Are you nuts?”
“It worked for Merrick.”
“Merrick isn’t Draak.”
“Everyone keeps saying that. I’m sick of being alone. My mate is clearly not behind the Veil, and I’m not interested in waiting for the next generation to grow up. I didn’t come here for a lecture. I’ve heard it all. Dozens of times.”
Harper looked resigned. “Fine. Why did you come, then? Where do I fit into this grand scheme of yours?”
“I need connections. Information. What is the best way to meet the most number of people in the least amount of time?”
“Sheesh, you don’t ask for much, do you?”
Kirit crossed his arms and raised one dark eyebrow.
“Do you realise how many people live in this frickin’ city?” Harper pointed out.
“Shall I give you a precise number or an estimate?”
“Shut up.” Harper groaned. He grabbed another beer before plopping onto the couch. The ragged piece of furniture echoed Harper’s groan, creaking ominously under his weight. “Make yourself comfortable,” he said, waving with his bottle. “This will take a while. Oh, and grab something to write with. You can make a list.”
Kirit did as directed, settling himself gingerly on a chair which was slightly newer than the couch, but even uglier. “You may begin,” he directed.
Harper growled. “Fucking dragon.”
Kirit gave the witch an extremely toothy smile. “That’s the ultimate goal.”
“Next time, I’m not opening the door,” Harper declared.

The second book in A Dragon's Treasure series will also be on sale through Pride Publishing. Click on the cover below to visit the book's page on their website.

Born and raised in the middle of the Midwest, I have always been a dreamer. More often than not I could be found with my nose buried in a book (many of which I had to sneak past my parents). It wasn't long before I started trying my hand at writing more of the stories I loved. After years of penning tales that rarely left the hard drive of my computer, I discovered M/M romance. As with all genres, it wasn't long before my own characters started to take shape.

There is little I love more than wandering new places and, on occasion, entirely new worlds with my characters. They can range from cowboys to Victorian noblemen, accountants to shapeshifters, and everything in between. I write mainly m/m romance, usually with paranormal or fantasy elements. I willingly follow my characters wherever they decide to go, sometimes with unusual results. I have little control over their actions—any naughty behaviour is all their doing!