Review: The Billionaire's Virgin (A Billionaire Fairytale #1) by Jackie Ashenden 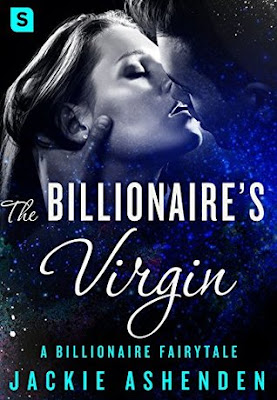 "This is what you deserve, sweet thing. This feeling. This pleasure. It's all for you, understand me? So why don't you just relax and let me give it to you?" - Xavier De Santis

The headlines are always shouting about the excesses of the so-called Prince Charming of the De Santis family. Problem is, Xavier is everything they say he is.

But now he’s gone too far, and he has has been ordered to clean up his image. Volunteering at a homeless shelter, Xavier sees a bright light amidst all the bleakness. An angel whose luminous face and tragic beauty call to him in ways he can’t explain.

When the shelter Mia calls home closes, she is left with nowhere to go. Nowhere except the luxurious, glorious palace of a home where Xavier De Santis has invited her to stay. This too-handsome billionaire is dark, dangerous…and also too good to be true.

Surely Mia can indulge in her fantasies and escape the hardness of her daily life for just one night?

Mia doesn't belong in his world. But as Xavier tempts his rags-to-riches heroine with exquisite pleasure and heady desire, Mia may have no choice but to surrender to him completely.

Jackie Ashenden was one of my favorite "new-to-me" authors that I found last year. From the moment I started reading Dirty For Me, the first book in her Motor City Royals series, it was lust at first sight. As per my usual reaction towards a new book from a new author, I squealed with delight and immediately dived right on in. And I have to say, The Billionaire's Virgin was not what I was expecting. While Dirty For Me is pretty much in your face sexy, The Billionaire's Virgin was much more of a slow burn, which worked well for two characters from completely different backgrounds. First, we have Xavier. I truly wanted to make him my new book boyfriend, but he came off as too much of a jerk at the beginning of the book. Forced to volunteer at the homeless shelter, he spends the time looking down at people below him. And while he does start to turn his attitude around once he sees Mia, his only focus is helping her. He would help someone if it benefited her instead of wanting to help someone in need. He does redeem himself by the end of the book and a huge part of it is because of the emotions Mia pulled out of him during their budding relationship. Kudos to Jackie for creating a character like Mia. I don't think I've ever come across a homeless heroine. In some ways she is strong and resilient, but she's also incredibly vulnerable. She survived when others would probably crumble by being strong and knowing her surroundings. While she brings out the better side of Xavier, he also helps her blossom into who I think will be a stronger woman. It's cliche, but they were what the other person needed.

While I enjoyed The Billionaire's Virgin, I wished it was longer so I could see more of Xavier and Mia together. This is a story that would benefit from being a series of novellas based on them as a couple. I wanted to see how Mia got accustomed to having money and no longer homeless. How does Xavier continue to grow with Mia by his side? Overall, I enjoyed their romance and I'll definitely be back for the next book when it comes out in March.