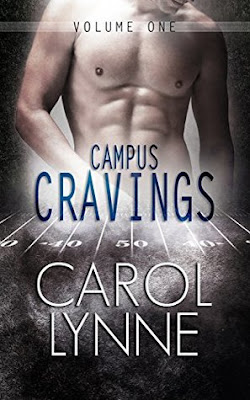 Books one, two and three in the bestselling Campus Cravings series – previously released as single titles...

Coach
Being a gay high school football coach isn't easy, especially in a small town. For five years Justin has repressed his sexuality in order to keep the job he loves. His only serious temptation is the father of his star running back. Sparks fly between the two men, and one Friday night after a winning game, Justin just can't say no.

Luc is the man he's been searching for his entire life. But is this new relationship worth risking his career?

Side-Lined
College is supposed to be a time of exploring new things, learning about yourself and having a good time doing it. For Max Henley, it was the hardest time of his life. During his sophomore year, his best friend and lover, Nick, was killed in a car wreck. A car Max had been driving.

Now two years later Max has thrown himself into his studies. Side-lined from football due to an injury sustained during the wreck, Max's entire focus is on academics. Well, that and his Professor Alec Demakis.

The problem is, whenever Max thinks about his Professor, the guilt over Nick's death returns. Can Max ever forgive himself enough to love again?

Koby is thrilled when his all-time favourite player agrees to help him. Not only can they work on Koby's upper body strength, but maybe on the growing attraction between them.

What Koby doesn't know is that a lifetime of abuse has left its mark on Julian. When shadows from the past threaten their growing relationship, Koby helps Julian fight back by getting him the help he so desperately needs.

But will therapy be enough when the past comes back to threaten Julian in person?

The first three titles in Campus Craving are available in a bundle on Amazon for $0.99! 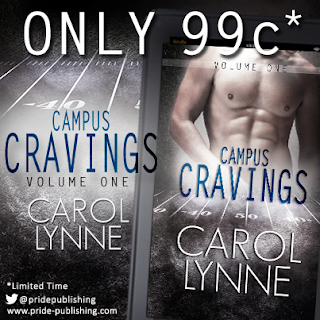 After changing into an obscenely tight pair of low slung jeans and white T-shirt, Max called for a cab. The twenty-minute cab ride almost caused him to chicken out. He wasn’t sure if he wanted to know what was at the end of this journey.

The cab pulled up in front of, what appeared to be, some kind of leather bar. With new resolve, Max paid the driver and got out. Opening the door, he was immediately hit with the smell of sweat and men. The bouncer sitting on a stool just inside the door looked him up and down.

“Haven’t seen you in here before, sweet thing.”

“I’m new,” he mumbled as he walked away. The tables in the large, dark room appeared to be full, so Max headed toward the bar. Finding an open stool, Max gave the bartender a slight wave to get his attention. “Tequila, please.”

The man nodded and poured him a shot. “Here ya go, pretty man.”

Max closed his eyes on the endearment. Nick had called him that all the time. Everyone had always remarked about how pretty he was. It was one of the reasons he’d worked so hard at weight training. He didn’t want to be thought of as pretty, men weren’t pretty.

Turning around on his stool, Max looked toward the dance floor. The song was fast yet seductive and the dancing reflected that. Watching the sweaty bodies pressed together in various gyrations, Max felt his cock begin to take notice. As he watched the dancers move, a strong back caught his eye. He lowered his gaze to include the perfectly muscled leather-clad ass. “Oh fuck me,” he whispered to himself.

Evidently, getting out was long overdue. Max finished his drink and slowly walked toward the dance floor. He waited until the song was over before tapping the large man on the shoulder. “Would you care to dance?” Max asked timidly over the sound of the crowd.

When the hunk turned around, Max’s legs began to buckle. He felt himself sinking to the floor, but was unable to do anything about it. A strong arm quickly reached around his torso and held him up. “Alec?”

Turning completely away from his previous dance partner, Alec wrapped his other arm around Max. “What are you doing here?”

He looked up into the midnight black of Alec’s eyes. “I-I found a matchbook that belonged to Nick. I needed to know.” Max looked around at the leather-clad crowd. Grown men were kneeling at the feet of other men, some with dog collars on. It was obvious this was some sort of D/s bar, but it didn’t make sense to him. He looked back up to Alec. “Did... you know Nick?”

Max tried to step back, out of Alec’s arms. “Why?” He shook his head as Alec continued to hold him. “Why would he come here without telling me?”

“I have my own thoughts on that, but it’s not something I’m willing to discuss with you right now. Later, when you’ve calmed down, we’ll talk.” As the music continued around them, people started bumping into them.

Alec held Max a little closer and began to move his hips. “Dance with me.”

Max was too numb to refuse at that point. He let Alec pull him even closer as he slipped a long leathered thigh between his legs. The first brush of his cock against Alec’s leg sent jolts of pleasure racing through Max’s body. He couldn’t help but to moan.

Pulling Max down even harder on his leg, Alec bent to whisper in his ear. “I’ve dreamt of having you in this position. I want you.”

When Max moaned and looked up at him, Alec seized his lips in an all out assault, sliding his tongue deeply into Max’s mouth. Still kissing, Max let his body take control of his mind as he ground himself against Alec.

When a strong hand covered his erection, Max thought he’d lose it. He broke the kiss, “Stop, I’m gonna shoot in my jeans.”

“Come home with me,” Alec whispered against his lips as he continued to massage Max’s cock.

Check out the series page on Pride Publishing's website to find sales on the rest of the series. Note that not all of the books are on sale.