Limited Sale: With This Collar (Mastered #1) by Sierra Cartwright 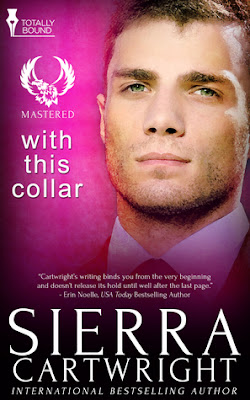 Julia Lyle will have nothing to do with domineering men, no matter how tall, dark, and sexy. But Dom Marcus Cavendish will be satisfied with nothing less than collaring the fiercely independent Julia.

Nothing could have shocked her more…

Julia Lyle is invited to her best friend's wedding and is stunned when Lana kneels to accept her husband's collar. When Julia starts to object, firm, relentless hands land on her shoulders. The man behind her threatens to turn her over his knee if she interrupts. She's outraged, but there's no doubt he's serious.

After the ceremony, he offers her a glimpse into her friend's lifestyle, if she's brave enough to accept.

Master Marcus Cavendish is everything she doesn't want in a man—dominant, self-assured and arrogant. So why can't she resist him?

Telling herself that learning about the lifestyle will make her a better friend, Julia agrees to submit to Master Marcus, but only for the evening. Firm and unrelenting in his handling of her, he introduces her to his tawse and the pleasure/pain of a spanking delivered by a competent Dom. The experience unnerves her, making her question everything she thought she knew about relationships, and his forced orgasms leave her shattered.

No doubt the scene seduced her, and that makes her doubly determined to avoid him. She has fought hard for her freedom and vowed only to date nice men, and Master Marcus is anything but safe.

Marcus is undeterred. Julia is a natural sub. The way she responded to his touch, his voice, his punishment proved it. Now he has to convince her to yield to him, submitting to his tawse as she kneels to accept his collar. 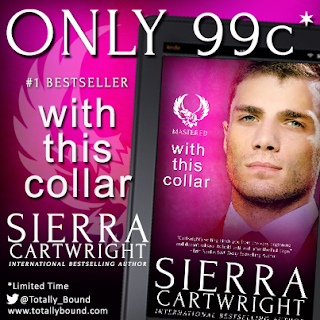 "And now, friends, Lana will offer her submission to her new husband," Damien Lowell said.

Lana and Julia had chatted on the phone earlier in the week to discuss the final wedding plans. Lana had warned that the union would be a bit untraditional. She'd been vague about the details, but she'd made Julia promise to say nothing during the ceremony.

They'd been friends since they were ten, and there was no way Julia would miss the festivities, even if they were a bit odd.

Until now, everything had been what she'd expected.

Lana and Ben were being married at their friend Damien's mountain home. Damien was also performing the ceremony.

About two dozen of the couple's closest friends had gathered in the great room and, at dusk, Lana had descended the stairs of Damien's picturesque home, carrying a single, beautiful, white rose to match her full-length gown.

The only gift requested had been a candle. In a romantic gesture, the pair had said they wanted all their friends to light their way into their future.

As Ben and Lana had joined hands and faced Damien, fat snowflakes had fallen from the cloudy sky. The vows had included the word obey, which was somewhat unusual among their circle of friends. But everything else had been normal. Lana had placed her rose on the mantel behind Damien before she and Ben had exchanged rings.

'Sir'? Until tonight, Julia hadn't met Damien. She knew he was a friend of the groom's, and he was drop-dead, movie star handsome. The man had rakishly long, dark hair that curled at his nape, and he wore an indefinable air of command as easily as he filled out his charcoal grey suit. But still, for her friend to call him 'Sir'...?

Lana cast her gaze at the floor and gracefully turned her back to her new husband.

Ben undid the row of tiny buttons that held her gown closed.

At The Den nothing is off limits… In an idyllic mountain setting on a dozen secluded acres of land, Master Damien Lowell has made his spectacular Colorado home—the Den—available to a select group of people. Doms and subs are invited to explore the intricate nuances of dominance and submission, of sadism and masochism, of exquisite bondage, and strict discipline.

The Den—where the wildest of fantasies becomes reality, lives are transformed, and limits are shattered.

Various titles from the Mastered series are also on sale via Totally Bound. To visit the series page, click HERE.